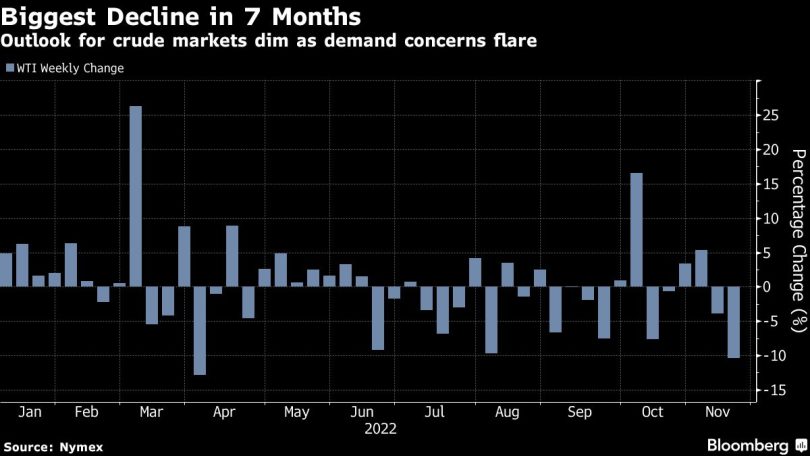 Crude prices and natural gas prices saw a rare divergence this week as both demand and economic concerns weighed heavily on crude prices while falling temperatures gave a boost to natural gas.

West Texas Intermediate on the New York Mercantile Exchange fell four of five trading days, beginning with a $3.09 plunge Monday and a $3.95 dive Thursday. Prices fell an additional 1.9% Friday to close near $80 a barrel — $80.08 per barrel, down $1.56 from Thursday and down 10% for the week the steepest decline since April when releases from the Strategic Petroleum Reserve were announced. The posted price ended the week at $76.56, according to Plains All American.

Even with high crude prices, Pickering noted that the rig count is actually slowing down. “That to me signals that the capital discipline dynamic is real,” he said.

He cautioned that the industry’s drilling inventory is degrading across all producing basins as operators drill their best wells and turn to the “less best” wells that will need higher prices.

Edward Moya, senior market analyst, The Americas at Oanda, wrote in his daily e-newsletter, “The oil market is fixated over the short-term deteriorating crude outlook and not so much the long-term supply risks. Technical selling of crude could get uglier as the shortened trading week might see some thin conditions. Eventually oil will stabilize, but right now no one wants to try to guess the bottom.”

Frigid temperatures boosted demand for heat, in turn sending natural gas prices higher. Henry Hub gas futures on the NYMEX, after seeing volatile up-and-down moves the last couple of weeks, enjoyed a relatively stable week, rising four of five trading days and remaining above the $6 per Mcf level most of the week. The biggest jump was a 17-cent rise Thursday that put prices at $6.37 per Mcf. Prices retreated 6.6 cents Friday to close the week at $6.303 per Mcf.

Rob Wilson, vice president, product at East Daley Analytics, has told the Reporter-Telegram natural gas prices at the Waha header have been impacted by takeaway constraints, something he expects will continue until the planned Matterhorn Express pipeline, with its 2.5 billion cubic feet of capacity, comes into service in 2024.

His firm is fairly bullish on natural gas prices near-term due to the growth East Daley expects to see from Permian Basin wells.

“We see nothing in the numbers to change our view,” he told the Reporter-Telegram before speaking at the Hart Energy Executive Oil Conference.