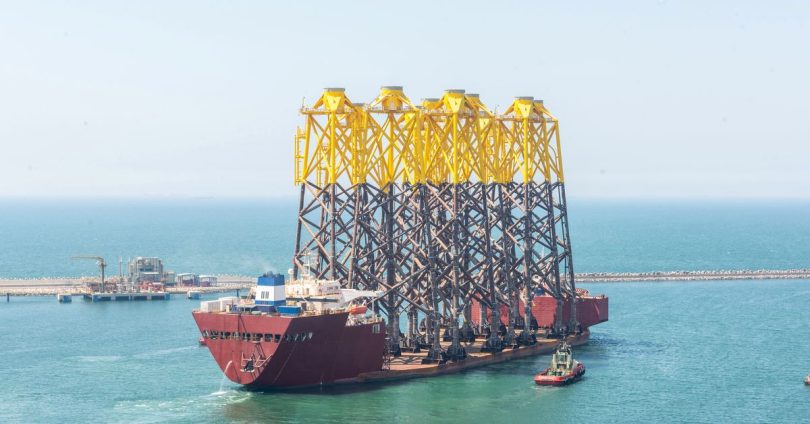 A facility operated by oil and gas services company Lamprell in Dubai, United Arab Emirates is pictured in this handout image provided to Reuters on June 24, 2022. Lamprell/Handout via REUTERS

BENGALURU, July 21 (Reuters) – Economies in the six-member Gulf Cooperation Council will grow faster this year than previously thought, thanks to higher oil production, according to a Reuters poll of economists who forecast growth to slow next year along with global demand.

Crude oil prices, a key catalyst for Gulf economies, have gained over 35% this year and while expected to remain elevated they are likely to average below $100 a barrel next year. OILPOLL

The six Gulf Arab states – Saudi Arabia, the United Arab Emirates, Kuwait, Qatar, Bahrain and Oman – are on track for budget surpluses, some for the first time in a decade.

A July 6-20 Reuters poll predicted growth overall in the six GCC economies would average 6.2% this year, up from 5.9% predicted in an April poll. That would be the fastest in nearly a decade.

But growth was forecast to decelerate quickly to nearly half that pace, 3.8%, in 2023. That was a modest upgrade from the previous poll.

“Global growth remains under pressure, with the Ukraine war causing a commodity price shock and threatening recession. The outlook for the GCC region by contrast has been strengthened by spiking oil prices,” said Ensaf Al-Matrouk, assistant economist at NBK.

“A broadening or worsening of the war in Ukraine could tip the global economy into recession, pushing oil prices down sharply even if oil supply remains constrained, hitting regional growth and fiscal balances.”

Al-Matrouk added that a further rise in non-energy commodity prices including food could hurt growth and spark worries about regional economic security.

The region is increasingly aware that the world’s long-term shift away from fossil fuels puts a limit on the oil bounty, adding impetus for it to spend more of their cash windfall on diversifying oil- and gas-reliant economies.

Saudi Arabia, the region’s largest economy and world-leading exporter of crude oil, was expected to grow at the fastest pace in over a decade at 7.6% this year.

Around 80% of common contributors, 15 of 19, upgraded their growth outlook for the country, while three kept it unchanged, and one downgraded. Growth was expected to fall to 3.3% next year and 2.8% in 2024.

Among other GCC economies, expected growth in Kuwait would be 7.0% this year, and in the United Arab Emirates at 5.7%, the fastest in around a decade. Qatar and Oman are both forecast to grow 4.5%, the quickest in half a decade, whereas Bahrain is at 3.5%, the fastest since 2017.

Another saving grace for the Gulf countries is that inflationary pressures are lower than in the rest of the world despite the ongoing Russia-Ukraine war and economic slowdown in China.

The inflation outlook in the region is modest but varies. It was expected to hover around 4%, with the lowest reading for Saudi Arabia at 2.5% and the highest for Kuwait at 4.8%.

That is modest compared to advanced economies, where it is running close to double digits.

“This is built on the factors that the GCC countries have really strong finances due to the high oil price and although of course oil cannot be eaten, it’s something which enables those markets to counter the food price costs and the fuel price,” said Ralf Wiegert of S&P Global Market Intelligence.

“Of course, the fuel price costs depend partly on the oil price, but in terms of imports, this helps to mitigate the cost of living increases, at least to some extent.”

(For other stories from the Reuters global economic poll:)

Reporting and polling by Anant Chandak; Editing by Ross Finley and Jonathan Oatis