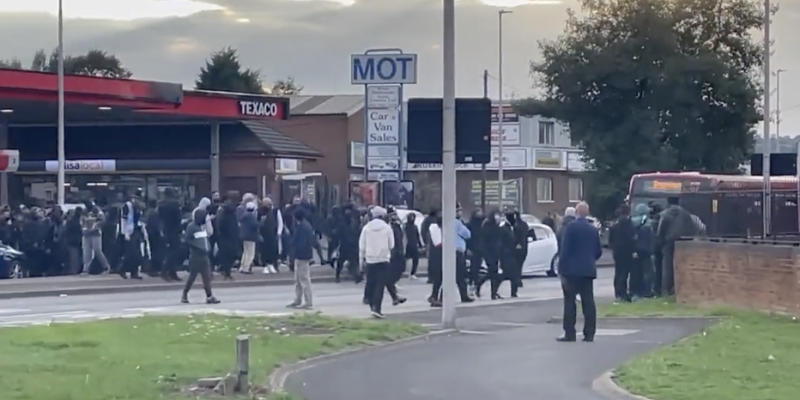 New Delhi: After a serious rise in tensions following communal skirmishes between Hindu and Muslim residents of the culturally diverse Leicester city in the United Kingdom, disorder was reported from Birmingham over a now-cancelled visit by Rithambara, a Hindutva leader most famous for being part of the leadership behind the Babri Masjid demolition.

A “minor disorder” during a protest outside a Hindu temple in the city of Birmingham involving fireworks targeted at police officers has resulted in a man’s arrest and stop and search powers being deployed, UK police said.

Videos of Tuesday’s protest outside Durga Bhawan temple on Spon Lane in Smethwick area of the West Midlands city circulated on social media overnight, with groups of masked men seen shouting and hurling items. Police officers could be seen holding and pulling some of these masked men trying to scale the temple fence.

“Following a protest gathering in Smethwick last night (September 20), there was some minor disorder and one person was arrested,” West Midlands Police said in a statement.

“We had a pre-planned police presence near the temple in Spon Lane where fireworks and missiles were thrown towards some of our officers. Thankfully no-one was injured,” the police said, adding that it is also looking into reports of a “small number” of cars being damaged.

The 18-year-old man arrested on suspicion of possessing a knife remains in custody for questioning on Wednesday.

“We are continuing to provide a visible police presence, working closely with faith leaders and partners across the community to provide reassurance. We will continue to monitor the situation locally and across the region,” the police said.

Rithambara is the founder of Durga Vahini, the women’s wing of the Vishwa Hindu Parishad. Before her visit to Birmingham, the Muslim Association of Britain had called on the UK Home Office to revoke her entry. The portal ‘Hindutva Watch’ has reported that she was scheduled to attend several events in London, Birmingham, Nottingham and Coventry between September 20 and 24.

The Birmingham protest was reportedly called by local Muslim groups. Police had announced earlier on Tuesday that Rithambara’s visit had been cancelled.

“We understand this (protest) is in relation to concerns around a speaker at the temple in Spon Lane, but we’re informed the event has been cancelled and this person is not staying in the UK,” local Sandwell Police posted on Twitter on Tuesday.

Over last weekend there have been reports of what local police called “serious disorder” between Hindu and Muslim groups in Leicester in the wake of an India-Pakistan cricket match at the end of last month. As many as 47 arrests took place over the past few weeks. Community leaders gathered outside a mosque in the city to appeal for harmony.