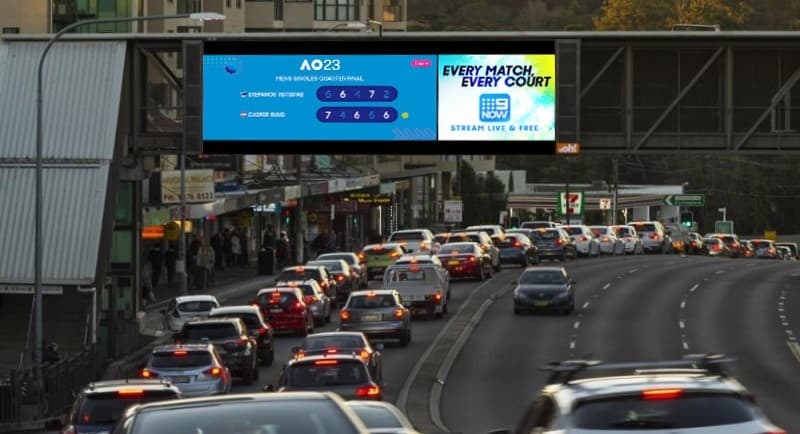 oOh!media has signed advertisers, Nine Entertainment and Michael Hill Jewellers, to deliver key highlights of this year’s Australian Open to Out of Home audiences across Australia.

oOh! announced a content agreement with Tennis Australia at its Outfront in October to provide real-time scores, video highlights and fan moments from Australian Open 2023 to more Australians than ever before.

oOh! is using its market-leading, proprietary technology to broadcast live scores from the first Grand Slam of the year across oOh!’s national digital screen network in seconds, alongside in-vision brand sponsorships.

Tim Murphy, oOh!’s chief sales officer, said: “As Australians head outdoors during the summer, oOh! will keep tennis fans up-to-date with all the excitement and drama from the Australian Open, one of the world’s major sporting events.

“We are delighted to have oOh’s advertisers Nine Entertainment and Michael Hill Jewellers recognise the effectiveness of Out of Home in connecting audiences on the move and at scale, by displaying their messages alongside the latest scores, and highlights from the two-week festival of tennis.”

Cedric Conelis, Tennis Australia chief revenue officer, added: “This collaboration with oOh! further demonstrates Tennis Australia’s and the Australian Open’s willingness to continue to innovate and bring our fans new experiences. We are excited to bring the AO action to people no matter where they are across the country.”

The oOh!media agreement with Tennis Australia follows a partnership with the AFL to amplify live scores, video, news and photos from last year’s AFL Toyota Final Series which reached more than 80% of Australians.

oOh! has also collaborated with Broadsheet to serve hyper-targeted information on the best entertainment, dining and cultural experiences across state capitals on the oOh! Office network.

Following a multi-year agreement with News Corp Australia, oOh! is broadcasting breaking, lifestyle, sport, business news and bespoke videos from mastheads including news.com.au and The Australian.

Murphy added: “As part of our digital first future, oOh! continues to invest in delivering the best, contextually relevant digital content to Out of Home audiences, making public spaces better and connecting advertisers with consumers in innovative new ways that makes brands unmissable.”