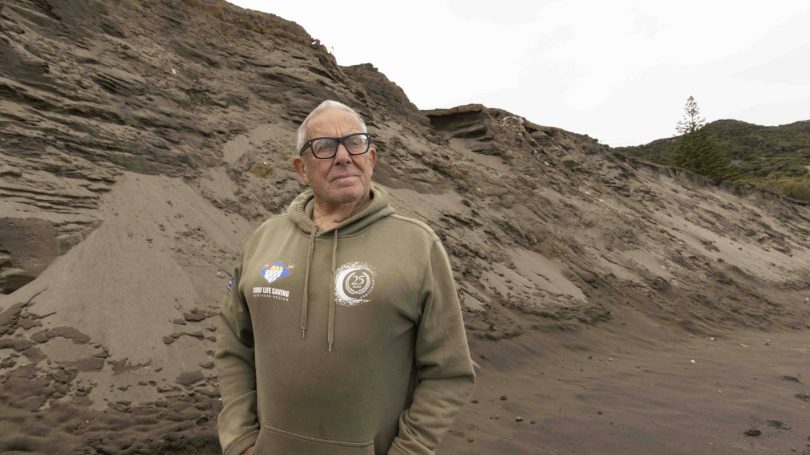 Half of the beach-front car park in Port Waikato has crumbled into the sea after days of heavy rain battered the coast.

The sand dunes at the popular holiday spot on the North Island’s West Coast are being pummelled from two sides– with the ocean’s tow claiming sand and torrents of rain water washing it away from above.

Sunset Beach has long been affected by a natural phenomenon where sand movements build up, then erode the shore.

But this time it was the water from heavy rain surging over the edge of Sunset Beach’s raised car park that caused chunks of tarseal to break off, Sunset Beach surf life-saving club president Malcolm Beattie said.

Port Waikato locals will “do our very utmost” to slow the crumbling of the beachside banks, says Sunset Beach Surf Life Saving club president Malcolm Beattie. But about three metres of land was lost after recent storms.

The water had nowhere else to run, and its force caused the tarseal to crumble – which pulled the sand dunes down with it.

”I could see it just washing away before my eyes,” Beattie said.

The accessway down to Sunset Beach had also been washed out at the bottom. In a rescue last week surf lifeguards had to carry the IRB down the beach, because there was no vehicle access.

Five metres of the car park was lost – which was a whole row of parking spaces. There had been about 60 car spaces, and now only 25 remained.

The car park serviced the beach, a coffee cart, and the new community centre.

If the erosion continued and the sea made it to the new building, the whole community and its roads would be at risk, Beattie said.

“We wouldn’t have a community.”

He admitted having a few sleepless nights thinking about the water creeping closer.

And other locals were nervous too. He said many were retirees who were wondering if they needed to pack up their lives and retreat.

Beattie said the plans to slow the damage needed to be sorted before next winter arrived.

The Waikato District Council was putting sandbags on the car park to channel the water away from the car park’s steep edge as a temporary solution.

“If we don’t get it done over the next summer I fear for the future,” Beattie said.

“This needs to be fixed quickly. It worries me.”

But further up the beach, dunes which were once a vertical cliff’s edge had in some places started to build into a slope.

Planting on the dunes had started to grow and was holding them together, Beattie said.

“It’s not all doom and gloom.

“But you can never fight erosion, you just slow it down.”

The beach lost another three metres of sand was lost in the storm earlier in June.

Waikato District Council planning and policy manager Jim Ebenhoh said the car park had been moved five metres inland, and council had cut and removed the asphalt back to the new line of fence to try and prevent it falling onto the beach.

About 90 sandbags, stretching about 80m, were being put in to try and limit the run-off from rain going over the edge of the car park.

The beach access-way was damaged, and a new path had been formed using existing rocks, sand, and gravel from the beach.

“We are also clearing debris and asphalt that has slipped down on to the beach from the car park.”

He said the council was preparing a resource consent application, to be lodged by Sunset Beach Lifeguard Service, to allow, if approved, for up to 1000m3 of sand to be pushed up against the dune face, in an attempt to slow down erosion.

A project proposed by Sunset Beach Lifeguard Service also suggested a retaining wall embedded in the steep dune on the edge of the car park.

“The intention of this is for sand to be tipped over the edge to try and slow down erosion,” Ebenhoh said.

This has been discussed by the Port Waikato Resilience Group – a combination of local residents, Waikato District Council and Waikato Regional Council representatives – and was undergoing technical review prior to any application for resource consent.

“This has not been endorsed or funded by Waikato District Council at this stage.”