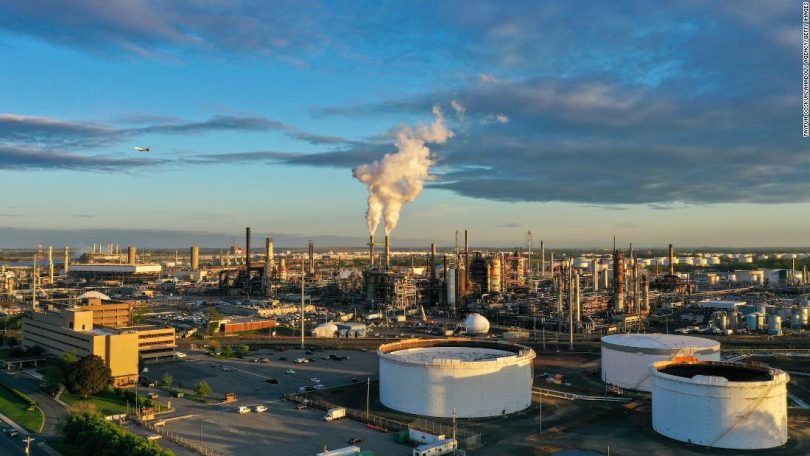 The price of crude has taken a drastic plunge amid worries about slowing demand for fuel and the prospect of further tightening by the Federal Reserve leading to recession. But at the same time, shares of energy companies have continued to climb.

The S&P 500 is down more than 17% this year while shares of Exxon, Halliburton and Chevron are all up more than 45%.

Oil prices and energy stocks are closely interlinked — so this discrepancy is an odd one and could mean that lower gas prices may not be here to stay.

What’s happening: The price of West Texas Intermediate crude oil, the US benchmark, which is a large driver of gas prices, has fallen to its lowest level of the year this week — under $72 a barrel. It was trading above $120 a barrel in the summer.

The average price for gas was $3.33 a gallon on Thursday, down from its mid-June peak of more than $5 per gallon, according to AAA. That’s just under what it cost a year ago, when the national average was $3.34.
But even though gas prices are falling, they’re still higher than they have been over the past few years. That’s contributed to record-breaking profits at major energy companies like Chevron and Exxon. The net income of global oil and gas producers is expected to double in 2022 to a record $4 trillion, according to the International Energy Agency.

In the third quarter, 81% of all energy companies in the S&P 500 reported earnings above estimates, the highest of any sector, according to Factset data. The energy sector reported the highest year-over-year earnings growth of all 11 sectors, at 137.3%.

While crude prices are dropping, equities traders appear to be taking on a different bet: They’re hoping that OPEC’s recent decision to stick with supply cuts and Europe’s agreement to cap the price of Russian oil at $60 a barrel will keep the global supply of oil very tight, even if demand drops.
And demand may not drop. Recession isn’t a given just yet, and the reopening of China from restrictive Covid-zero shutdowns could increase demand for fuel.

Exxon and Chevron are also speculating that crude prices will remain elevated and that demand will grow.

Exxon announced Thursday that it will lift capital spending next year by 10% to between $23 billion and $25 billion, with the goal of raising oil and gas production to a record 4.2 million barrels of oil equivalent per day by the end of 2027. Chevron said Wednesday that it expects to spend $14 billion in 2023, adding $2 billion, or 14%, to this year’s budget.

What’s next: In the end, the divergence may be temporary: In four of the five major splits between oil and energy stock prices since 1990, oil returned to a rally in the year that followed, according to Bespoke Investment Group.

Mortgage rates fall for the fourth week in a row

Mortgage rates dipped again this week, dropping for the fourth week in a row, reports my colleague Anna Bahney.

Mortgage rates have risen throughout most of 2022, spurred by the Federal Reserve’s unprecedented campaign of hiking interest rates to tame soaring inflation. But mortgage rates have tumbled in the last couple of weeks, following reports suggesting inflation may have finally reached its peak.

“Over the last four weeks, mortgage rates have declined three quarters of a point, the largest decline since 2008,” said Khater. “While the decline in rates has been large, homebuyer sentiment remains low with no major positive reaction in purchase demand to these lower rates.”

Sam Bankman-Fried appears to have changed his mind about testifying before Congress.

A group of prominent US lawmakers are demanding that the founder of the failed crypto exchange FTX, appear before the Senate Banking Committee next week to answer “significant” questions around the collapse of his crypto empire, reports my colleague Allison Morrow.
The committee’s Democratic chairman, Sen. Sherrod Brown of Ohio, and Republican Sen. Pat Toomey of Pennsylvania delivered a letter to SBF and his lawyer on Wednesday demanding answers on behalf of the American people about alleged “misconduct” that led to the collapse of FTX and its sister hedge fund, Alameda.

“You must answer for the failure of both entities that was caused, at least in part, by the clear misuse of client funds and wiped out billions of dollars owed to over a million creditors,” the senators wrote.

Brown and Toomey said in their letter that the committee would “consider further action if he does not comply.”

Will he or won’t he: A representative for his attorney referred Allison to Bankman-Fried’s tweet on Sunday in which he told Rep. Maxine Waters, a California Democrat, that he couldn’t commit to testifying at a hearing scheduled for December 13, one day before the Senate committee’s hearing.

“Once I have finished learning and reviewing what happened, I would feel like it was my duty to appear before the committee and explain,” Bankman-Fried wrote. “I’m not sure that will happen by the 13th.”

But in another tweet early on Friday, Bankman-Fried said he was willing to testify on December 13. “I still do not have access to much of my data — professional or personal. So there is a limit to what I will be able to say, and I won’t be as helpful as I’d like,” he added.