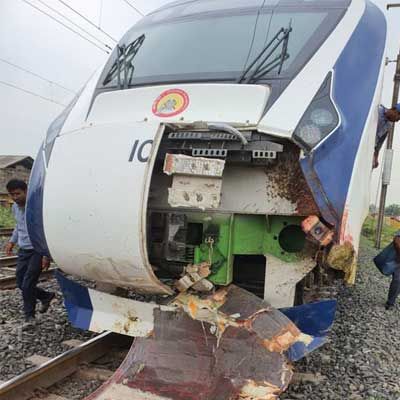 The Indian Railways will be erecting a boundary along over 1,000 kilometres of track to prevent cattle accidents. Railway Minister Ashwini Vaishnaw said that a new design of fencing will be adopted which can be installed very quickly to prevent cattle being run over by trains.


“A new design of boundary wall has been approved to prevent cattle run-overs. This fence will be installed over the coming 5-6 months,” Vaishnaw said.


Run-over of cattle on the Indian Railways network was recently in the news after a series of accidents involving Vande Bharat trains. These accidents resulted in minor damage to the front portion of the brand-new trains. Railway officials maintained that the impact of cattle run-overs was only cosmetic and that operations are in no way affected.


But unlike conventional trains that have cattle catchers or cow guards, the Vande Bharat trains have a replaceable nose cone. While there is no damage to the operational part of the trains during cattle run-over incidents, the optics are concerning.


Vaishnaw was speaking to journalists while announcing career upgrade opportunities for Supervisory cadre. “This decision will benefit 40,000 supervisors who will get an average monthly wage increase of Rs 2,500 to Rs 4,000 per month,” he said.