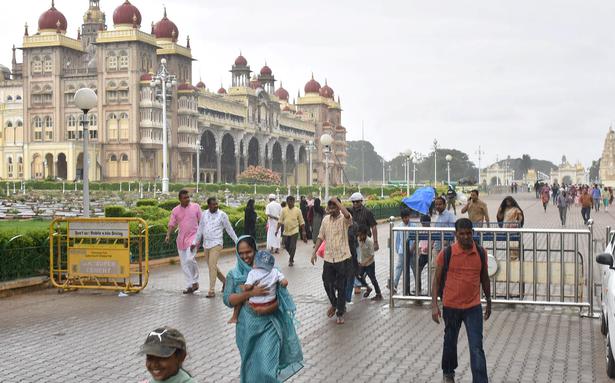 The tourism sector — which is one of the key economic drivers of Mysuru – and had pinned hopes on an early recovery after the downturn due to the pandemic, is in doldrums again.

Incessant rains since the second week of August washed away any gains made since early this year when the pandemic came under semblance of control.

The hospitality sector is among the worst affected though the stakeholders are keeping their fingers crossed and hoping that the prolonged rains will end soon and bring the tourists back to the city again.

From a peak of 100% occupancy in hotels in the run up to the Independence Day in August, the bookings are down to 30% or less across most hotels, said C. Narayana Gowda, president, Hotel Owners’ Association.

There are nearly 10,000 hotel rooms in Mysuru catering to tourists all of which were booked in the second week of August kindling hopes of a buoyancy in the tourism sector.

‘’The beginning of September and lasting through the Dasara is one of the major tourism seasons for Mysuru. But continuous rains through greater part of July, August and now into the second week of September has affected travel and tourism,” said Mr. Gowda.

It is not just that people are not coming to Mysuru, even the locals are confined to their homes given the incessant rains and hence the restaurants are also reporting negative returns.

A significant tourist traffic originates from Kerala and Tamil Nadu but their arrivals have depleted due to rains. Though it is the domestic tourists from rest of India who keep the wheels of the tourism sector oiled and moving, the inflow of local tourists from other parts of the State too has slowed down due to widespread rains across Karnataka.

Statistics from the Palace Board indicate that the tourist footfalls during August in the pre-pandemic times used to hover above 2.5 lakh. Though there was semblance of recovery in the first two weeks of August this year, incessant rains since then put paid to any hopes of further recovery and the footfall was restricted to 1.95 lakh. The palace had received 3.69 lakh tourists in May this year soaring hopes that one was witnessing a turnaround in the sector. But footfall plummeted to 1.95 lakh in August.

The 13th century Keshava temple at Somanathapur in Mysuru district which draws a good number of tourists from Bengaluru in normal times, is also witnessing a drought in terms of footfall. ‘’A majority of the tourists visiting Somanathapur tend to be from Bengaluru and surrounging regions but the footfall is down for 10 days now given the road conditions in Bengaluru, Ramanagaram and Channapatana,” said Devaraj, a licensed guide at the historic temple.

Similar trends have been reported from other places of tourist interest as well in the region and are expected to last till the withdrawal of monsoon.