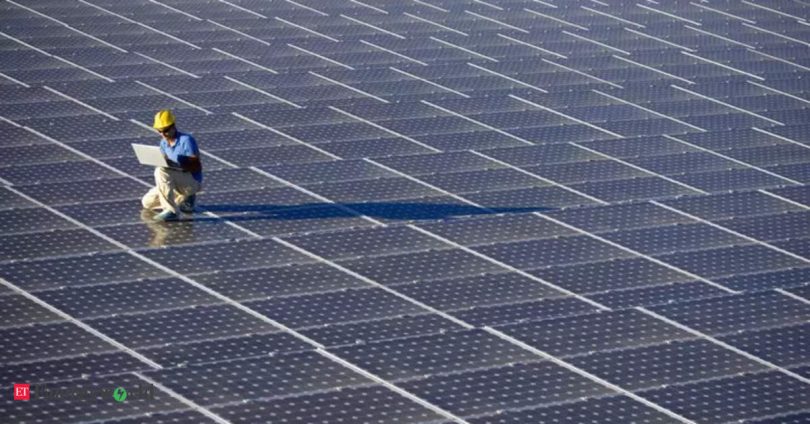 New Delhi: India needs strategic investments of over $300 billion to achieve its clean energy capacity target of 500 GW by 2030, according to a new study. With 165 GW generation capacity already in place, India is on the right trajectory to meet its goal of having 50% of energy needs through the renewable portfolio, says the new Arthur D. Little study titled ‘Powering India’s Energy Vision 2030.’

According to the study, in order to accelerate India’s power sector growth, private players and governments must synchronise with each other in implementing a holistic transformation. Increased adoption of green energy—particularly green hydrogen with efficient storage solutions, leveraging technologies such as carbon capture, smart meters, smart grids with robust data management systems, and enabling efficient price discovery via power exchanges will shape the future of India’s power sector.

To achieve surplus generation, the research proposes a multifaceted approach involving financial support from the government, policy reforms, judicial reforms and technology integration at the Central, State, and Local levels while targeting the entire value chain.

“India is at the cusp of attaining self-sufficiency in electricity generation and establishing itself as a reliable energy exporter at the global level. Since the power sector is at the heart of India’s economic, political and technological growth, every small step towards improving it would propel the country’s leap towards the US$ 10 trillion economy goal,” says Barnik Chitran Maitra, Managing Partner, Arthur D. Little, India & South Asia.

The impetus to indigenous PV cell production, transition to smart grid and increased private participation in distribution are key to unravelling India’s true potential in the power sector.

As per the study, India’s electricity consumption is expected to grow at an annual rate of 5.4% over the next decade, with annual demand touching 2300 BUs by 2030. However, at the current pace, generation will just reach only 2024 BUs by 2030, highlighting the need for reforms in capacity addition.

To further accelerate adoption, according to the ADL perspective, India should focus on developing solar and wind generation capacities. As the big conglomerates foray into green hydrogen and other renewable energy generation, associated industries such as transmission and distribution also need significant transformation.

While government initiatives such as Rooftop Solar Program, National Hydrogen Mission and PM KUSUM have laid a strong foundation for transitioning towards renewables, India is still a long way from realizing the targeted benefits of these schemes. The involvement of consumers with planned awareness campaigns along with leveraging global alliances to boost FDI and technology collaboration could be key focus areas.

India is all set to be a big player in Green Energy generation and aspires to not only attain its energy security but to also start supplying power to neighbouring nations.