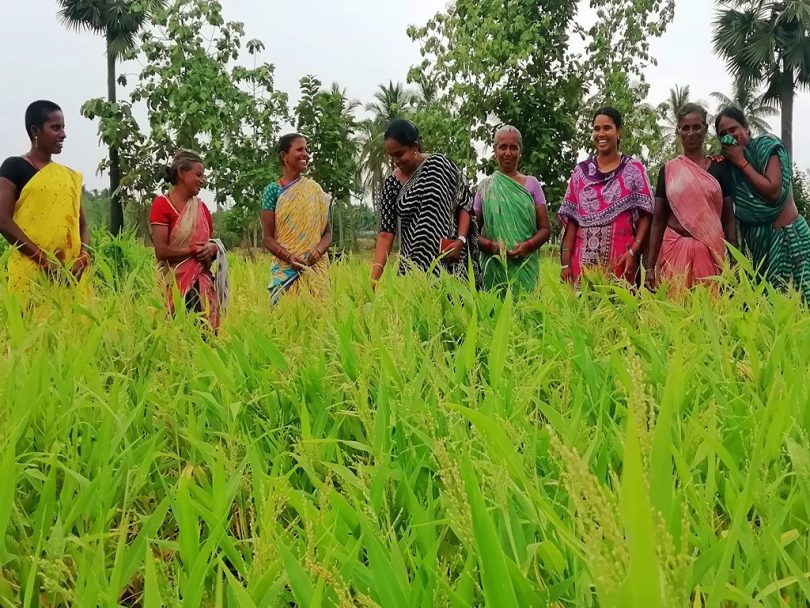 India is the largest agriculture-dependent country, where the culturally diverse population still relies on agriculture and it is not just a business for them but the ‘true culture of India’. Agriculture is the main economic sector demographically and plays a major role in the entire socio-economic system of India. The position and contribution of women are no longer a matter of contention because the percentage of women who rely on agriculture for their livelihood is more than 80.00 per cent in rural India. In Indian agriculture, women play an important role. Women are involved in 70% of significant farm work and constitute 60% of the agriculture population (NSWF, 2014) (6).  In India, out of 30 million women in the workforce, 20 million live in rural areas. Rural women’s daily schedule of work is very demanding and arduous. It is estimated that during the peak time, women work in agriculture for around 8-9 hours a day and in household activities for 4 hours, and there are certain farming practices in which women are perceived to be better than male workers according to Suma et al., (2005) (10).

Historians consider that it is women who first domesticated the crop and initiated the art and science of farming. Prehistoric women shouldered the responsibility of hoeing, digging, and hauling in early agriculture. In recent times it has been seen that men are moving out of villages to cities to get better work opportunities and to earn money. While women are left in villages to manage their homes and take care of their small farms. Eventually, women are taking the responsibility for most of the farm activities. This has been termed as ‘Feminization of Agriculture.

Role of women in agricultural activities

In Indian agriculture, women play multiple roles right from sowing to harvesting. Patil and Nagnur (2015)(7) reported that farm women participation is seen as high in harvesting and post-harvesting operations (72.49%), pre-sowing and sowing operations (61.63%) and inter-culture operations (62.96%). They work as paid & unpaid labourers, cultivators, and managers of certain aspects of agricultural production by way of labour supervision and participation in post-harvest operations. In agricultural growth and related fields, women play an important role, including main crop production, livestock production, horticulture, post-harvesting operations, forestry agro/social etc according to Banerjee et al., (2016) (3). The rural women’s participation in the agriculture field includes land preparation, sowing activities, cleaning the seeds (85.00%), removal of weeds (71.67%), broadcasting the seeds (67.50%), and selection and treatment of seeds (40.83%). Whereas, cent per cent were often involved in transplanting, hand weeding 60.00%), watching the standing crop (56.67%), thinning and gap filling (53.33%) were done by the farm women and plant protection measures i.e. (50.83%) according to Soumya et al. (2009) (9).  It is also evident that majority 88.57 per cent women participate in both manurings of fields as well as transplanting of seedlings, followed by threshing (85.71%), harvesting (78.57%), transportation and storage of produce (64.28%), weeding, winnowing and cleaning (57.14%). More than half 51.42 per cent of women actively participate in field preparation as reported by Baba et al. (2009) (2).

There is a high degree of heterogeneity in the involvement of women in rural labor markers, but women are over-represented in unpaid, seasonal, and part-time work. Women are often paid less than men, for the same work. Women play multiple roles right from sowing to harvesting. Women are therefore key contributors to agricultural production and they are expected to perform household work but their contribution is always ignored in agriculture. Aggarwal et al. (2013) (1) reported that while performing agricultural operations, farm women are facing health, management, financial and social constraints and therefore the role of women in performing agricultural operations is comparatively low than men.

Role of NGOs to overcome constraints faced by women

A Non-Governmental Organization is an association that functions for the benefit of civil society. These groups belong to the civic or community sector. Unlike commercial organizations, NGOs work on a charity-like, non-profit basis.

The majority of NGOs are funded by grants offered by a specific foundation or agency. This implies that any funds generated by the organization are re-absorbed to advance the goals of the initiative. Non-profit organizations, independent sectors, and civil society organizations are other common names used to refer to NGOs.

Transfer of technologies through Self Help Groups could exert more decision-making authority, the autonomy of their income and household expenses, freedom of choice and mobility.

Female farmer-focused NGO initiatives in the agricultural sector will help to overcome constraints and strengthen their access to new knowledge and innovation of modern agriculture cultivation, retain better quality and quantity of yield, negotiate with the market and sell or preserve quality goods through interventions that consequently increase their overall income.

By creating awareness/promotion of to use of drudgery reduction technologies will reduce constraints faced by farm women and improve their participation.

Women participate in almost all agricultural and allied activities, still they are not getting equal access to capital, and institutional credit.  Delivery of legal awareness and property rights to farm women will enhance to improve decision-making power.


Women who are participating in agriculture and allied activities are being affected by so many health problems and they are not even in a position to afford medical treatment. So, NGOs have to take a proactive role in conducting awareness camps, and health camps, so that farm women can get benefited.

Women play multiple roles right from sowing to harvesting. Women are more actively involved in agricultural and post-harvest activities and make an essential contribution to the agricultural and rural economies. Women are expected to perform household work but their contribution is always ignored in agriculture. Their roles differ greatly between and within regions and are increasingly evolving in many parts of the world. While performing agricultural and post-harvest activities farm women face constraints and health problems, which further reduces their participation. Organizing female farmer-focused NGO initiatives in the agricultural sector will help to overcome constraints and strengthen their access to new knowledge and innovation of modern agriculture cultivation, retain better quality and quantity of yield, negotiate with the market and sell or preserve quality goods through interventions that consequently increase their overall income.

Banerjee T, Mishra A, Singh P, Tahiliani GA. 2016, Study on the role played by women in the agricultural sector in India. International Journal of Recent Trends in Engineering & Research., 2(11): 2455-1457.