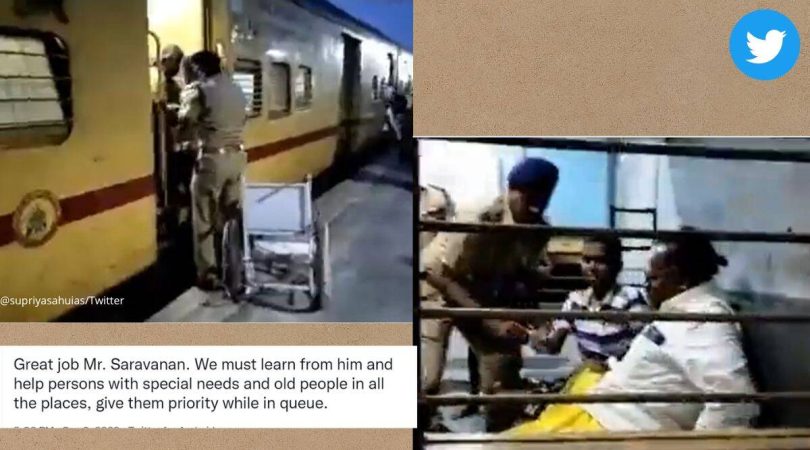 Travelling on a train in India is quite laborious for people with special needs. Trains in India are not accessible for specially-abled and boarding and deboarding becomes difficult. A video of a Railway Police Force(RPF) personnel helping a specially-abled man board a train was posted on Twitter. While the official is being praised for his kind gesture, many netizens also questioned the need for making trains for user-friendly for people with special needs.

IAS officer Supriya Sahu posted the video on Twitter Friday and it has received more than 31,000 views. The clip shows RPF SI, who has been identified as Saravanan, carrying a specially-abled man so he could board the train in Tamil Nadu’s Virudhachalam station. The official carried the man all the way to his berth.

“Wonderful gesture by Mr. Saravanan, SI,RPF. He carried a passenger with special needs and helped him to board a train at Virudhachalam station. We need more people like him,” Sahu wrote in the tweet alongside the video.

Watch the video below:

Wonderful gesture by Mr. Saravanan, SI,RPF. He carried a passenger with special needs and helped him to board a train at Virudhachalam station. We need more people like him. Video- by @RailMinIndia pic.twitter.com/mYSjRVfFdh

Netizens appreciated the gesture of the SI but also demanded better infrastructure from the Railways.
“But shouldn’t the railway compartments have hydraulic lifts to take in wheel chairs and specially a led persons? Should the RPF personnel be doing this? Isn’t security their primary duty? Why is the platform and bogey entrance not at the same plane so that chairs can be wheeled?” commented a Twitter user.

“That’s great. Being an IAS officer, I am asking you to think, do the person feels dignified ? Why can’t we in INDIA fail to provide accessibility? Look in our own area of operations, can you make real change? Will you?” another wrote.

“While I appreciate the thoughtfulness, from what I understand, persons with disabilities would rather do things for themselves. But the infrastructure & system does not support inspite of policies in place. Pls do push for universal accessibility,” said a third.