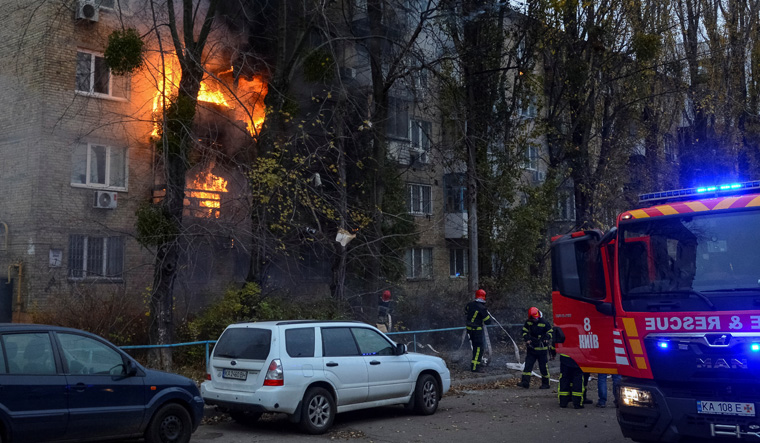 Russian airstrikes inflicted more damage on Ukraine on Thursday, with the latest barrage smashing into energy infrastructure, apartment buildings and an industrial site.

At least four people were killed and five others wounded in drone and missile strikes around the country, authorities said.

With the Kremlin’s forces on the ground being pushed back, Russia has increasingly resorted in recent weeks to aerial onslaughts aimed at energy infrastructure in parts of Ukraine it doesn’t hold.

Ukrainian air defences this week appear to have had far higher rates of successful shoot-downs than during previous barrages last month, analysts say. The improvement results in part from Western-supplied air defence systems.

But some missiles and drones still get through.

Russian strikes hit Ukraine’s southern Odesa region and the city of Dnipro for the first time in weeks on Thursday morning, and air raid sirens sounded all across the country amid fears that Moscow unleashed another large-scale missile attack.

“An infrastructure target was hit on the Odesa region,” Governor Maksym Marchenko said on Telegram, warning about the threat of a massive missile barrage on the entire territory of Ukraine.

Multiple explosions were also reported in Dnipro, where two infrastructure objects were damaged and at least one person was wounded, according to the deputy head of Ukraine’s presidential office, Kyrylo Tymoshenko.

Officials in the Poltava, Kharkiv, Khmelnytskyi and Rivne regions urged residents to stay in bomb shelters amid the persisting threat of missile strikes.

Thursday’s blast follows the huge barrage of Russian strikes on Tuesday, the biggest attack to date on Ukraine’s energy infrastructure that also resulted in a missile hitting Poland.

Russia has increasingly resorted to targeting Ukraine’s power grid as winter approaches as its battlefield losses mount. The most recent barrage followed days of euphoria in Ukraine sparked by one of its biggest military successes the retaking last week of the southern city of Kherson.

The head of Ukraine’s presidential office, Andriy Yermak, called the strikes on energy targets a naive tactics of cowardly losers in a Telegram post on Thursday.

“Ukraine has already withstood extremely difficult strikes by the enemy, which did not lead to results the Russian cowards hoped for,” Yermak wrote, urging Ukrainians not to ignore air raid sirens.

Russia’s invasion of Ukraine, which began on February 24, saw growing food shortages and skyrocketing prices that left millions of people, especially in developing countries, unable to buy enough to eat.

Russia’s UN ambassadors had complained last month that more needed to be done to facilitate its exports of grain and fertilisers.

Under the separate agreements with Russia and Ukraine brokered by the United Nations and Turkey, the deal will be extended for another 120 days when it expires on November 19 unless either Moscow or Kyiv objects.