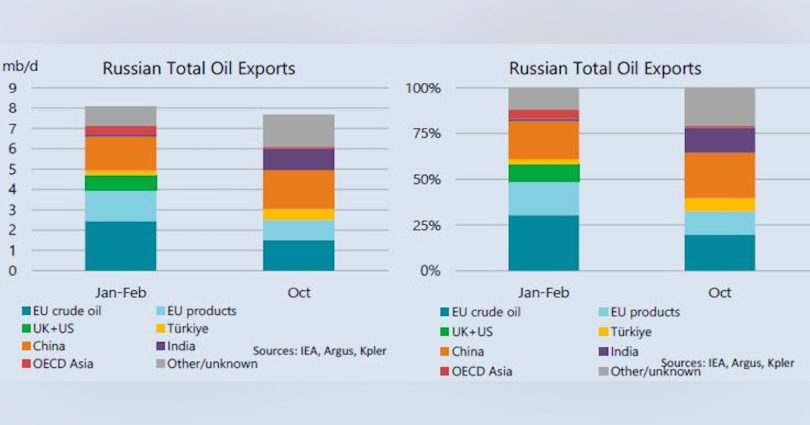 Russian oil exports rose by 165,000 b/d in October to 7.7 million b/d as shipments to the European Union (EU), China, and India were largely unchanged month-over-month (m-o-m), according to the International Energy Agency (IEA)’s November oil market report. Lower shipments to Turkey were more than offset by increased flows to yet to be identified destinations. Export revenues were up by $1.7 billion to $17.3 billion on higher volumes and gains in crude oil and product prices.

Both crude oil and product flows increased m-o-m. For the EU, crude oil shipments fell to just 1.5 million b/d as a 140,000 b/d decline in Druzhba pipeline flows was partly offset by a small increase in seaborne flows. This brought the cumulative drop in crude oil exports to the EU to 1 million b/d compared with the January-February average. By Dec. 5, Russia will need to redirect another 1.1 million b/d of crude oil exports elsewhere, as the EU import ban begins.

India, China, and Turkey relatively quickly made up for more than the EU foregone volumes, ramping up their crude oil imports from Russia by about 1.2 million b/d by this summer. Their purchases have stabilized somewhat over the last 2 months. Whether they will receive another boost from December onwards remains to be seen. The EU import embargo is accompanied by a ban on maritime services and insurance by EU-domiciled companies, with the UK also having enacted similar legislation. The price cap mechanism provides exemptions to these bans, but Russia has opposed it.

“If China, India, and Turkey do not increase their imports of Russian oil, the rest of the world (excluding sanctioned destinations) would need to triple their Russian oil imports (to 3.3 million b/d from 1.2 million b/d) by February 2023. We do not think this is feasible, therefore our crude oil and refinery throughputs forecasts for Russia incorporate sanctions-related losses,” IEA said.

Products trade is facing uncertainties, IEA noted. On one hand, the dynamics of EU’s imports of Russian crude oil and products are quite similar. The EU’s share in Russian crude oil exports fell to just 31% in October from 50% before the war, while the product market share fell to 35% versus 50% pre-war levels. On the other hand, Russia has been able to redirect all the crude oil volumes, while it has had to cut refined product exports by 400,000 b/d since the start of the year.

“The so-called shadow trade, including high-sea transshipments using ‘dark’ tankers (with unclear ownership and record), is also likely to expand and could obstruct Russian trade analysis. At the time of writing, some 100,000 b/d of September loadings and 450,000 b/d of October loadings (or about 6%) were missing destination information. It is highly likely that most of these volumes will eventually materialize in flows to Russia’s main markets, namely, the EU, China, India, and Turkey. From next month, however, shippers of Russian oil outside the price cap may be incentivized to hide actual destinations,” IEA said.

On the EU import side, losses in Russian crude oil volumes have been offset by increased supplies predominantly from the Middle East, but also Africa, Norway, Brazil, and Guyana.

Diesel imports into the EU in October increased by almost 50% compared to pre-war levels due to French refinery strikes and seasonal maintenance. European buyers are also eager to rebuild stocks before the Feb. 5 deadline for Russian product imports. Russian diesel imports into the EU have only marginally fallen from Jan-February averages. But in October, with high inflows from other suppliers, the share of Russian diesel in the EU imports dropped to an unprecedented low 40% from the 60% pre-war level.