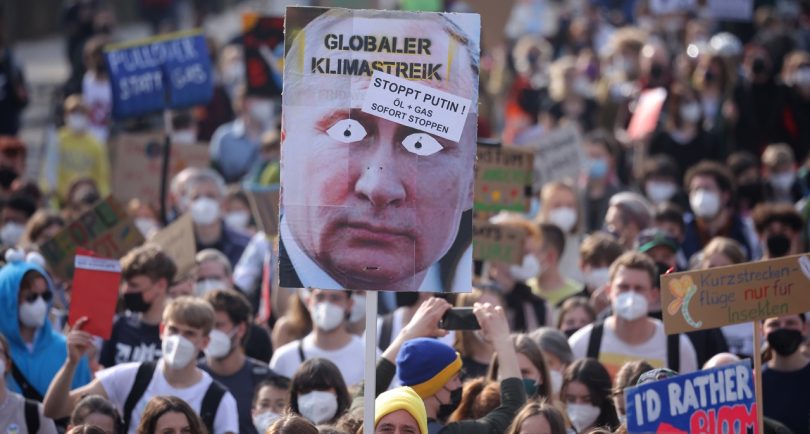 The war in Ukraine will in the longer term accelerate Europe’s shift to renewable energy from fossil fuel, Britain’s climate envoy said in South Africa on Thursday, even as it prompted nations to burn more coal over the coming months to offset reduced Russian gas supplies.

UK Climate Envoy John Murton was addressing journalists in South Africa alongside delegates from the US and European Union countries France and Germany.

They are visiting South Africa to discuss the details of an $8.5-billion package to help it fund a transition from coal.

South Africa gets 80% of its power from coal and has committed to swapping it for cleaner energy, but for that, it needs billions of dollars.

No new agreement or details emerged from the visit, although the head of South Africa’s Presidential Climate Finance Task Team, Daniel Mminele, said the country planned to have an investment plan in place by October.

There are political hurdles to abandoning coal, an industry with close links to high-ranking ruling party politicians and in which tens of thousands of jobs are at stake.

Some accuse the West of hypocrisy in telling Africans to stop using coal while firing up its own coal burners after interruptions to gas supplies from Russia, the world’s biggest gas exporter.

“It’s true that, as a result of pressures arising from Russia’s illegal invasion of Ukraine, some of us anticipate using a little more coal over the next few months than we previously planned,” Murton said.

“[But] there is not a dash back to coal in the UK or in Europe.”

Britain, which in the past 12 months used coal for only 1.7% of its power supply, he said, was still on track to phase it out for electricity generation entirely by October 2024.

If anything, the disruption linked to Russia’s invasion of Ukraine, which Moscow calls a “special military operation”, had made the transition to renewable energy more urgent, Murton said.

As a result, Britain raised its target for offshore wind energy production to 50 gigawatts, from 40 gigawatts previously.

Pope Francis on Thursday called on world leaders to heed the Earth’s “chorus of cries of anguish” stemming from climate change, extreme weather and loss of biodiversity.

In a message for the World Day of Prayer for the Care of Creation, he urged nations to confront climate change with the same attention as global challenges like wars and health crises, saying global warming hurts poor and indigenous populations the most.

Francis said rich countries have an “ecological debt” because it is they who have caused the most environmental pollution over the past two centuries, marring nature’s song.

“Tragically, that sweet song is accompanied by a cry of anguish. Or even better: a chorus of cries of anguish. In the first place, it is our sister, mother earth, who cries out. Prey to our consumerist excesses, she weeps and implores us to put an end to our abuses and to her destruction,” he wrote.

Emergency services have battled wildfires across swathes of southern Europe amid brutal heatwaves this week, prompting warnings that the fight against climate change needed to be stepped up.

The appeal came a few days before the Pope was due to leave for a trip to Canada, where he will meet with indigenous people in Iqaluit in the Canadian Arctic, one of the fastest-warming parts of North America.

“Exposed to the climate crisis, the poor feel even more gravely the impact of the drought, flooding, hurricanes and heat waves that are becoming ever more intense and frequent,” Pope Francis said.

“Likewise, our brothers and sisters of the native peoples are crying out. As a result of predatory economic interests, their ancestral lands are being invaded and devastated on all sides, provoking a cry that rises up to heaven.”

Francis repeated an appeal “in the name of God” that he first made last year to the mining, oil, forestry, real estate and agribusiness industries to “stop destroying forests, wetlands and mountains, to stop polluting rivers and seas, to stop poisoning food and people”.

The pope, who in 2015 wrote a major encyclical on environmental protection, said the UN COP15 summit on biodiversity, to be held in Canada in December, would be a big opportunity for an agreement to halt the destruction of ecosystems and the extinction of species.

He said COP15 could construct a clear ethical basis for the changes needed to save biodiversity, support conservation and give priority to vulnerable populations, including indigenous peoples.

He called for the “effective implementation” of the 2016 Paris climate change agreement, whose goal is to limit the increase in average global temperature to 1.5°C.

At a news conference presenting the message, Cardinal Michael Czerny, the head of the Vatican’s development office, said “enough is enough”, and called for an immediate end to new exploration and production of coal, oil, and gas and the phasing out of the production of fossil fuels.

He also backed the Fossil Fuel Nonproliferation Treaty initiative, a movement to end the new development of such fuels.

‘The US is not prepared’: Hot temperatures stress transit systems

With temperatures soaring beyond 40°C  in the United Kingdom and in the US, civil engineers and transit authorities say the heat is threatening rail networks across both countries.

Officials with London’s subway mandated temporary speed limits and preemptively cancelled services on parts of the city’s tube system earlier this week over fears that the rails could bend or buckle. Across the Atlantic, Amtrak imposed “heat-related” speed restrictions within its Northeast Corridor service between New York and Philadelphia earlier this month.

Heat restrictions on railways are not unusual, and the US Department of Transportation maintains that the country’s railroads are well equipped to address the ways that extreme heat affects their overall operations. But researchers say that climate change will make service disruptions more commonplace with more scalding heat waves to come.

“The US is not prepared,” said Paul Chinowsky, a professor of civil engineering at the University of Colorado Boulder. “While the rail system is incrementally being improved, there is significant work to do and what is being done is not being done fast enough.”

In Concord, California last month, high temperatures were the culprit behind a curve that emerged in a railway line that ultimately derailed a train, according to the Bay Area Rapid Transit Authority. And in Portland, Oregon, last year, temperatures that reached over 37°C wreaked havoc on the city’s public transport, MAX Light Rail, melting the overhead cables that power its trains. City officials had to suspend all train services for almost two days.

“Extreme heat will continue to present challenges for Bart and all transit agencies,” according to Alicia Trost, a spokesperson for the Bay Area Rapid Transit Authority.

The weight and speed of passenger or freight trains are a deadly combination for railroads baking in sweltering heat. The United States’ railways are mostly made of steel, and with higher temperatures, steel expands and softens. That’s especially true in the northeast and southwest, where tracks were not built to withstand or adjust to triple-digit temperatures, given the more mild climates, said Chinowsky.

“When it gets significantly hotter, like it is now, it gets soft, and you run a rail car over that, you get what are called sun kinks,” he said. “It’s essentially a deformation [and] the rails just buckle.

“You can even think of it as a person standing on sand,” Chinowsky said. “When you run on sand, or you put something really heavy on sand, it pushes that sand away from you; the same thing is happening to the rail.”

For US passenger and freight rail, heat-induced delays could incur costs anywhere between $25- and $60-billion, according to a 2017 report from the Transport Policy Journal.

The US needs to come up with an adaptation plan, said Fernando Moreu, a professor of civil engineering at the University of New Mexico. “We need to keep what we have, look at what we’ve been using, and retrofit,” he said.

Determining the point at which rail systems might succumb to heat is a big topic of current research, said Francesco Lanza di Scalea, a professor of structural engineering at the University of California San Diego.

“What I’m calling a blood pressure monitor for the rail is actually a big challenge,” he said. “I’ve worked on it for about 10 years, and it’s still known as the holy grail of railroad maintenance.”

Cheetahs to be reintroduced in India to boost population

Cheetahs, the world’s fastest mammals, will be reintroduced to India through an agreement with South Africa to help boost the population of the big cats.

Twelve of the predators, which once roamed across much of Asia and Africa and are now extinct in India, will be flown to the state of Madhya Pradesh where they will be introduced to the Kuno National Park, the University of Pretoria, which is assisting with the programme, said in a statement on Thursday.

The step is part of a plan to reintroduce the animals across their original range and to boost their global population, which currently stands at less than 7,000.

“The cheetahs earmarked for the India reintroduction come from various small private reserves in South Africa,” Adrian Tordiffe, a professor at the university’s Centre for Veterinary Wildlife Studies, said in the statement. “They are currently in large quarantine camps at two facilities in South Africa and are being prepared for relocation.”

While the cheetahs that went extinct in India are a different subspecies from those found in southern Africa, their function of top predators within the ecosystems in which they live is identical. Cheetahs will probably be sent from South Africa to India every year for the next five to 10 years, he said.

The Indian Tiger Conservation Authority, which oversaw the doubling of the tiger population in the Asian country over the past decade, will manage the Indian arm of the project. DM/OBP