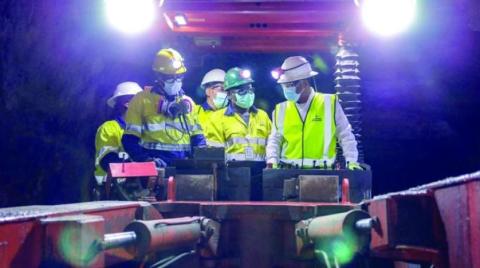 Saudi Arabia’s Ministry of Industry and Mineral Resources (MIM) has announced preparations for the second Future Minerals Forum (FMF), which will take place from January 10-12, 2023 at the King Abdulaziz International Conference Center in Riyadh.

The FMF will gather global mining industry leaders, including governments and business executives from around the world, under the theme of creating responsible and resilient minerals and metals supply and value chains in Africa, Western and Central Asia.

The 2023 edition is expected to welcome more than 13,000 participants, including government ministers, mining investment leaders and heads of major mining companies from more than 100 countries.

Saudi Deputy Minister for Mining Affairs Khalid Al-Mudaifer asserted that the mining sector can only be developed through international cooperation.

“That’s why we are gathering mining leaders to convene, discuss and explore the new metals and minerals hub emerging from Africa to Western and Central Asia,” he noted.

“The immense mineral resources in these regions are critical to supporting the socio-economic development of the region’s communities and the global circular carbon economy,” Al-Mudaifer added.

“The forum will provide investors and other international mining industry stakeholders with in-depth insights into the value propositions these regions hold.”

In other news, the MIM announced that the number of valid exploration licenses in the mining sector reached 550, distributed among 11 administrative regions across the Kingdom.

In a statement, the ministry said category (A) licenses came on top with 473 licenses, then category (B) with 58, and category (C) with 19.

The national companies that obtained licenses ranked first, accounting for 97% of the total, while the licenses granted to joint ventures between foreign and local companies dominated 3%.

The ministry received 1,039 exploration license applications until the end of August 2022, it added.