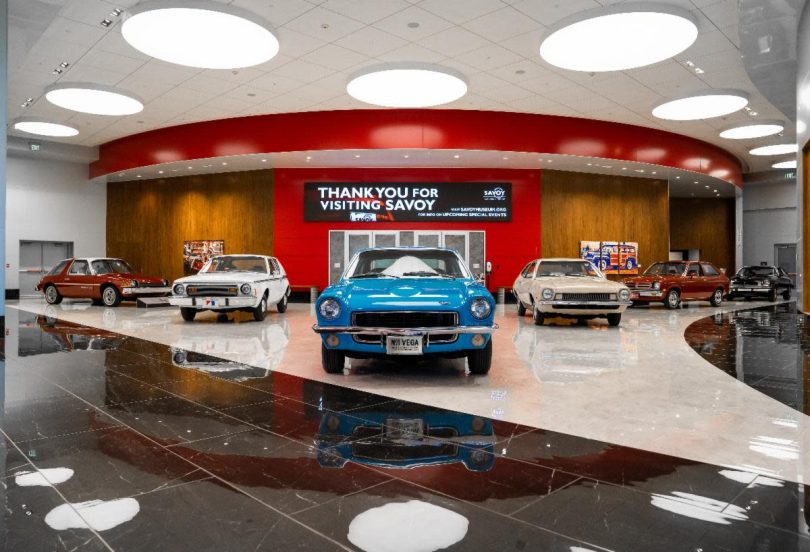 CARTERSVILLE, GEORGIA – The Savoy Automobile Museum  announced the opening on of its latest temporary exhibit, Built for a Crisis. In the 1950s and 1960s, it seemed like America couldn’t build its cars big enough. Even mainstream models were generally big and thirsty. Many drivers were getting tired of gassing up these enormous land yachts, but the market was slow to respond. The domestic manufacturers had produced some downsized models, but only a few, and Japanese automakers were just putting a foot in the door with their tiny cars. And then, essentially one day in 1973, everything changed when America’s oil supplier turned off the tap. The U.S. had become increasingly dependent on foreign oil. The United States used about 17 million barrels of oil each day, but only produced some 11 million of that itself. This exhibit displays some of the domestic models produced to compete with the smaller imported cars.

The exhibit will feature six iconic cars including a 1972 Ford Pinto, a 1974 AMC Gremlin, a 1975 AMC Pacer, and a 1975 Chevrolet Cosworth Vega, all part of the Savoy Collection. In addition, two special cars brought in specifically for the exhibit include a 1971 Chevrolet Vega and a 1976 Chevrolet Chevette, both from the General Motors Heritage Collection in Sterling Heights, MI. Visitors may find the Vega particularly interesting as it holds the prominence of the first Vega to be produced at the GM Lordstown Assembly Plant on June 26, 1970, at 3:05 pm. The Chevette was never sold and has its original sales sticker still on the window and only 64 miles on the odometer. This exhibit represents a significant part of our automotive history.

These cars will be on exhibit until April 30, 2023. The museum is open for visitors

Savoy Automobile Museum connects people to the cultural diversity of the automobile. Whether you are a serious car collector, a weekend enthusiast, or simply a traveling motorist from Detroit to Daytona, Savoy aims to educate and entertain through changing exhibits, educational programs, and engaging experiences. The world-class museum campus sits on 37 acres in Cartersville, GA and provides access to a variety of automobiles and specially curated collection of original automotive art. As the newest program of Georgia Museums, Inc., Savoy Automobile Museum joins a prestigious group of museums including Booth Western Art Museum, Tellus Science Museum, and Bartow History Museum.

Want a taste of Old Cars magazine first? Sign up for our weekly e-newsletter and get a FREE complimentary digital issue download of our print magazine.

*As an Amazon Associate, Old Cars earns from qualifying purchases.