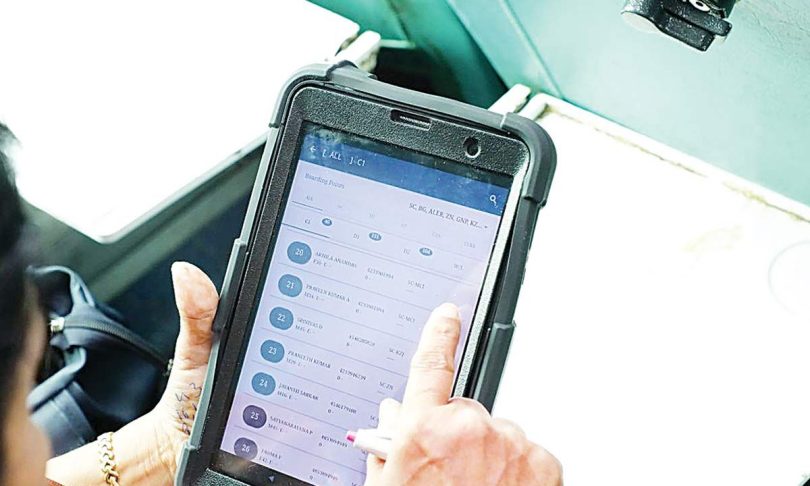 Hyderabad: Taking forward the initiative of Digital India Mission, the South Central Railway (SCR) has put one more step ahead by providing Hand Held Terminals with advanced features to its ticket checking staff which dispenses the need of carrying physical charts and making manual entries.

From now passengers will now not have to trace and request the onboard train ticket examiner (TTE) to allot a vacant berth against waiting for the ticket (purchased from the window counter) or Reservation Against Cancellation (RAC ) as the SCR has introduced Hand Held Terminals in 16 trains. (HHTs) – is a tablet which allows TTE to download the passenger’s manifest and subsequently update the system in case a confirmed berth passenger did not turn up for the journey.

According to SCR officials, HHT comes with advanced features that dispense the need of carrying physical charts and making manual entries. It enables the on-board ticket checking staff to verify the status of reserved passengers list and get to know the live status of vacant berths and allot the vacant berths to passengers in a wholly transparent manner. This is an eco-friendly move which has replaced paper charts presently used by TCs o¬n-board.

“HHTs were initially introduced on Indian Railways in Rajdhani and Shatabdi Express trains in 2019 and was implemented under SCR in Secunderabad-Pune Shatabdi Express. This system has now being introduced in 16 other trains which serice in the SCR Zone. The trains include three pairs of Duronto Express between Secunderabad-Nizamuddin, Secunderabad-Visakhpatnam and Secunderabad-Lokamanya Tilak Terminus, five pairs of superfast trains viz., Satavahana Express, Pinakini Express, Ratnachal Express, Sirpur Kagaznagar Express, Vijayawada Intercity express,” said a SCR senior officer.

Ticket-checking staff have been trained on the working of HHTs. The transformative measure of introducing HHTs is to enable checking and monitoring of the live vacancy status aboard the train which is expected to bring in a revolutionary change in the standards of customer services. This system is very flexible, as TCs can easily check the tickets of passengers and mark their occupation of the allotted accommodation.

Accordingly, any vacancies that arise during the journey can immediately come to the notice of the TCs who will be able to allot the same to needy passengers on the train. Passengers will benefit from prompt allotment of vacant berths in the course of the journey and will get real-time information about vacant berths at stations en route. Berths can be allotted for the needy passengers in the next remote location in case of vacant accommodation, even when the train is running. Information about cancelation done after the preparation of the chart is sent o¬n an hourly basis to the HHT, thereby easily detecting fraudulent travel. Refunds, if any, can be processed quickly as real-time data of vacancy position and occupancy is connected with PRS software, added the officer.

Arun Kumar Jain, General Manager (Incharge) stated that implementation of HHTs will be very useful for travelling passengers as it brings more effective, transparent and real-time working in the ticket checking system.