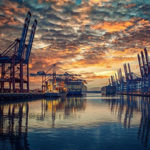 While much attention has been focused on European and North American disputes, the wave of port strikes has been spreading to the southern hemisphere, South Africa, Chile and Australia in particular.

A three-year pay deal was finally agreed after a two-week port shutdown which reduced container handling across South African ports by 59% in October 2022.

A nationwide strike that impacted all ports dragged down the country’s economy in October 2022. The South African Association of Freight Forwarders’ (SAAFF) assessed that port closures were blocking more than ZAR 8 billion ($0.5 billion) of trade each day.

Drewry analysed the three main container ports – Durban, Cape Town and Coega – and found that the average number of vessel calls were down by almost 60% in the first three weeks of October (3-23 October 2022) compared to the preceding 10-week period (see below). The latest data from Transnet shows that container handling plummeted 59% MoM in October 2022.

The strike, which started on 6 October 2022, finally ended after almost two weeks when the United National Transport Union (UNTU), which represents the majority of workers at state-owned port and rail operator Transnet, signed a three-year pay deal providing a 6% wage increase together with enhanced medical and housing allowances. The smaller South African Transport and Allied Workers Union (SAWATU) also agreed to the deal, despite initially condemning the offer as insufficient.

Meanwhile, the lack of alternative routes for export cargo saw pressure applied to government-owned Transnet to settle due to the spiralling economic cost of the port shutdown. With South Africa’s inflation rate at 7.8% in July 2022, it appears that both sides have had to compromise.

In Drewry’s view rising inflation increases the likelihood of strike action in other markets as dock labour push for higher wages to address the increasing cost of living. In addition to the unresolved US West Coast longshore workers agreement, a looming national rail strike could heap yet more disruption to North American ports. Meanwhile, dock worker strikes are affecting Chilean ports and a dispute involving towage operators threatened to close Australia’s ports until the courts intervened.

The Ports and Terminal Insight is a quarterly report (PDF) covering the latest developments in the container ports and terminals market, accompanied by a new monthly report (PDF) providing regular port congestion and performance monitoring (powered by Drewry AIS analytics). It looks behind the data and topical issues to answer both the ‘cause’ and ‘effect’ questions that matter most to senior industry stakeholders.
Source: Drewry