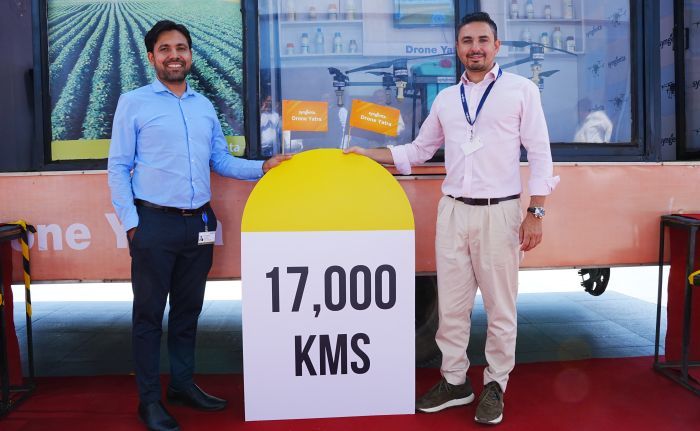 The Drone Yatra travelled to 13 Indian states, making over 15,000 farmers aware of best practices in spraying agrochemicals with the use of drones, which will save their time and cost

Pune – In order to create awareness of drone spraying among the farmers, Syngenta India, Friday, completed a Drone Yatra in 13 states completing a milestone of 17,000 Km.

Underlining the benefits of Syngenta Drone Yatra, Susheel Kumar, MD, Syngenta India said, “Our service charges are in line with what farmers invest in spraying through other mediums, but with many additional benefits like water saving of up to 90 per cent as compared to manual sprays, uniform coverage and reach for the entire field crops, better residual control and reduction in the human exposure, assuring farmer and operator safety.”

Speaking on the Drone Yatra, Sachin Kamra, Head, Farmer Centric Ecosystem, Syngenta India said, “Use of the latest technology to make agriculture profitable for farmers has been Syngenta’s priority. Syngenta has extensively worked with various state governments on the demonstration of use of drones in agriculture, especially for spraying which can help farmers save time and money. Syngenta has already received Drone-use label claims for some of the products, while other products are in the pipeline. Drone services are being expanded across India in a DAAS (Drone-as-a-Service) model. Currently, our commercial spray operations are live in five states – Punjab, Haryana, Madhya Pradesh, Andhra Pradesh and Telangana.”

You may also like to read: Syngenta introduces ‘Crop Doctor’ feature in its app to provide instant solutions for pest and disease attacks

The Drone Yatra, which was flagged off from Syngenta India headquarters on July 15 this year, travelled to 13 Indian states, making over 15,000 farmers aware of best practices in spraying agrochemicals with the use of drones, which will save their time and cost – thus increasing income in the long run. Arjun Ram Meghwal, Minister of State for Parliamentary Affairs and Culture, Government of India along with Kamal Patel, Madhya Pradesh Agriculture Minister and Surya Pratap Shahi, Agriculture Minister of Uttar Pradesh joined the Drone Yatra in their respective states.

“During Syngenta Drone Yatra, over 130 demonstrations were made to farmers, with the focus on highlighting the value of drone spraying in agriculture. The Drone Yatra covered over 17,000 kms across India, passing through Maharashtra, Madhya Pradesh, Gujarat, Rajasthan, Punjab, Haryana, Uttar Pradesh, West Bengal, Telangana, Andhra Pradesh, and Karnataka and has returned to Pune today to complete the journey,” said, Dr KC Ravi, Chief Sustainability Officer, Syngenta India. As many as 10 mega events were conducted during the Yatra with support from the state governments and local administrations.

“The Drone Yatra is a part of our efforts to make farming profitable and sustainable so that farmers are motivated to pursue agriculture as it is not only becoming more complex but also the return on investment is not attractive,” added Ravi.