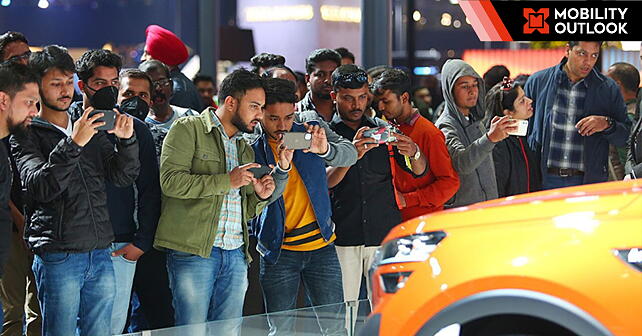 In all fairness, the Auto Expo at Greater Noida near Delhi was not a complete washout as a whole lot of people thought it would be.

Sure, there were some big names missing in the car segment but the ones present quite made up for that void. Top two-wheeler brands were prominent by their absence and that was something the organisers of the Auto Expo committee should ponder over considering that India is the largest market for motorcycles and scooters in the world. A show without Hero, Bajaj, TVS, Honda, Yamaha and Suzuki was, to put it mildly, a massive mood crusher.

The good news from Greater Noida, however, was that leading car/SUV players right from Maruti-Suzuki, Hyundai Motor and Tata Motors to Kia, Toyota and Lexus were present along with the Chinese duo of the SAIC-owned MG Motor India and BYD Auto. The message of electrification and clean fuel options came through loud and clear both at the passenger car pavilions as well as in the truck arena where Ashok Leyland, Tata Motors and VE Commercial Vehicles were present.

Other players like Greaves Electric and a handful of startups pretty much completed the picture which gave the media enough to write about. Clearly, the 2023 event was not a big bang affair like the ones of 1998 or 2008 when there were big ticket brands to look forward to like the Tata Indica, Hyundai Santro, Daewoo Matiz, Fiat Palio, Nano etc.

It has also been quite evident that interest in the Expo has been tapering off over the years largely due to the fact that it is an expensive affair for companies coupled with the fact that the shift to Greater Noida has been a dampener given the distance involved in travelling from Delhi.

In sharp contrast, the components event at the more comfortably located Pragati Maidan ticked all the right boxes and companies were delighted with the response. Footfalls were impressive for what was strictly a B2B affair and this was precisely what the participants were looking for.

“This is not like the vehicle show at Greater Noida which is more glamorous and gets huge crowds. In our case, we get visitors from the automotive ecosystem which means the target audience is way more precise,” said a top executive of a Tier-1 supplier.

Pragati Maidan was a complete sellout and there were many companies which could not make it as a result. Things did not look so promising on the opening day, January 12, when parts of the venue looked like a war zone. Rubble and debris greeted visitors and halls looked hollow and empty.

Miraculously, less than 24 hours later, the whole place had undergone a transformation and even while it was not quite a Shangri-La, this was thanks to the efforts of a whole lot of workers who toiled to get things in place. It was yet another case of the Indian jugaad at work even while this chaotic state of affairs begged the question: why was all the work happening at the last minute?

Speculation was rife that this was owing to poor coordination among the organising committee along with the fear of costs going through the roof which simply meant that the script was delayed and the mending process was carried out at breakneck speed even while it left those involved worried to death.

Fortunately, most visitors were coming in only in the second half of the 12th and the following days by which time Pragati Maidan was pretty much up and ready. The biggest crib was the poor connectivity within but the high energy levels all around more than made up for this setback.

Going forward, it is now quite apparent that vehicle manufacturers are sick and tired of Greater Noida as a venue. Their participation in the future will largely hinge on getting back to Pragati Maidan in 2025 when the next edition of the Auto Expo gets underway. This would mean getting back with the component makers as was the case in the past.

If reports are to be believed, this is something that the supplier fraternity is not too enthusiastic about even while they have no real quibbles with their OEM counterparts. “It is simply impossible to mix two entirely different shows where one is a distinct B2C while the other is a B2B,” said the same executive quoted earlier in this story.

While the location at Pragati Maidan is a huge plus compared to the more remote Greater Noida, clubbing the two events is not being seen as exactly the best recipe for the future given the limitations of space. There have been talks of Dwarka, another suburb near Delhi, emerging as yet another venue for the Auto Expo. It is well connected by the metro, not too far from the airport and clearly a better bet than Greater Noida even while not being as centrally located as Pragati Maidan.

It remains to be seen what the final solution will be over the next couple of years. Will Dwarka and Pragati Maidan be separate venues for the vehicle and component show respectively? Or will either of these locations club both the shows? Greater Noida is clearly not one anyone’s favourite list even though it has done its bit during the years Pragati Maidan was being renovated.

Old-timers will recall with a shudder the poor levels of housekeeping at Pragati when it was home to the Auto Expo since the mid-1990s and its infrastructure was virtually crumbling with every successive edition. All credit to the organising committee for offering Greater Noida as an alternative over the last few years. Even while the distance here is a sore point, nobody can possibly complain about its higher levels of cleanliness in contrast to the shoddy era of Pragati Maidan.

Has the time also come to look beyond Delhi as a venue for the Auto Expo? Given the fact that the industry is now in an all-new phase of electrification and connectivity, it may seem appropriate to consider other centres like Bengaluru, Chennai, Hyderabad or Mumbai/Pune. Delhi makes sense when it comes to VIP participation in the form of Ministers and the bureaucracy but surely they can manage this in another city too.

Another interesting fact pertains to the rapidly growing presence of youth power at ACMA (Automotive Component Manufacturers Association of India) compared to SIAM (Society of Indian Automobile Manufacturers). Even within the suppliers’ pavilions at Pragati Maidan, it was this age demographic that was quite evident and clearly in sync with the new era of technology and innovation.

More reason, perhaps, why many of them said they were keen on taking the Auto Expo to the level of a CES (Consumer Electronics Show) at Las Vegas. After all, if it is about showcasing India and its strengths in IT, the present model is in dire need of a makeover.

After Heady 2022, Carmakers Gear Up For Delhi Auto Expo