Last week, there were a number of developments in these four subjects or sectors: taxes, cement, electricity and land transportation.

DINNER TALK
Last Monday, June 13, I organized a dinner with incoming Finance Secretary Benjamin Diokno and Budget Secretary Amenah Pangandaman, and I gathered a few fellow columnists in BusinessWorld plus the newspaper’s editor-in-chief, Willy Reyes. I could have brought more columnists from the paper but Sir Ben wanted a small group.

Ben Diokno was my teacher twice at the UP School of Economics (UPSE): when I was an undergrad in 1984 and again when I took my graduate studies Program in Development Economics (PDE) in 1997. Mina was my classmate in PDE batch 33 so maybe they found it difficult to decline my request.

Among the topics we talked about that evening were the tax reforms done by the Duterte administration, infrastructure spending, agriculture modernization, reducing the debt stock, and the deficit/GDP ratio.

I checked some key fiscal ratios: there is truth to Sir Ben’s assessment that the recent tax reform legislation (TRAIN, CREATE, others) have indeed improved the government’s revenue mobilization, but public spending has significantly gone up resulting in a huge jump in the budget deficit/GDP ratio in the last two years (Table 1).

Among the things that Sir Ben and incoming Sec. Mina plan to do that I like are: avoid tax hikes and focus on improved tax administration via digital processes; the equal application of VAT on more sectors; no additional fuel tax hikes; restraining some subsidies and “elephant in the room” budget items that bloat expenditures; cut the deficit/GDP ratio back to -3% by 2028; and, more Public-Private Partnership (PPP) projects, especially with the Public Service Act (PSA) liberalization where foreign investors plus local partners can invest more in seaports, airports, airlines and so on.

I say “Amen” to these plans. And this means that some populist plans announced by President-elect Ferdinand Marcos, Jr. during the campaign period may have to be restrained as there are clear numerical targets of reducing the deficit and public debt burden.

Until last week, many Departments did not have secretaries yet, but the economic team — composed of the departments of Finance, Budget and Management, Trade and Industry, the National Economic and Development Authority (NEDA), and Bangko Sentral ng Pilipinas — was filled up some three weeks ago. It was a good move by Mr. Marcos Jr., telling the business communities here and abroad that the selection of the economic team is based on expertise and not political patronage.

Last Saturday, another “red alert” in the Luzon grid was issued by the National Grid Corp. of the Philippines (NGCP) “due to generation deficiency.” Every year, yellow- and red-alerts over thin power reserves are experienced in the Luzon grid, partly because several generating plants are restrained from expanding the supply due to NGCP’s failure to complete certain transmission lines. The ERC is silent whenever the NGCP failures adversely affect the power supply situation in the country, but the ERC is outspoken in penalizing generation and distribution players for their failures.

The ERC should leave the PEMC-IEMOP dynamics alone and respect the DoE circular that recognizes both entities.

FREE TRADE IN CEMENT NEEDED
Until last week, the “Cement Anti Dumping” group kept sending their materials to columnists of BusinessWorld, and perhaps other newspapers, arguing that expensive imported cement via higher tariffs is good and beautiful.

Among the important policies of modern East Asia is lowering tariff rates — although non-tariff measures have been rising worldwide, tariff rates on goods have been declining. Which drastically helped their local manufacturing in need of more materials from more countries at more competitive prices. And East Asian economies are able to sustain their fast growth (Table 2). 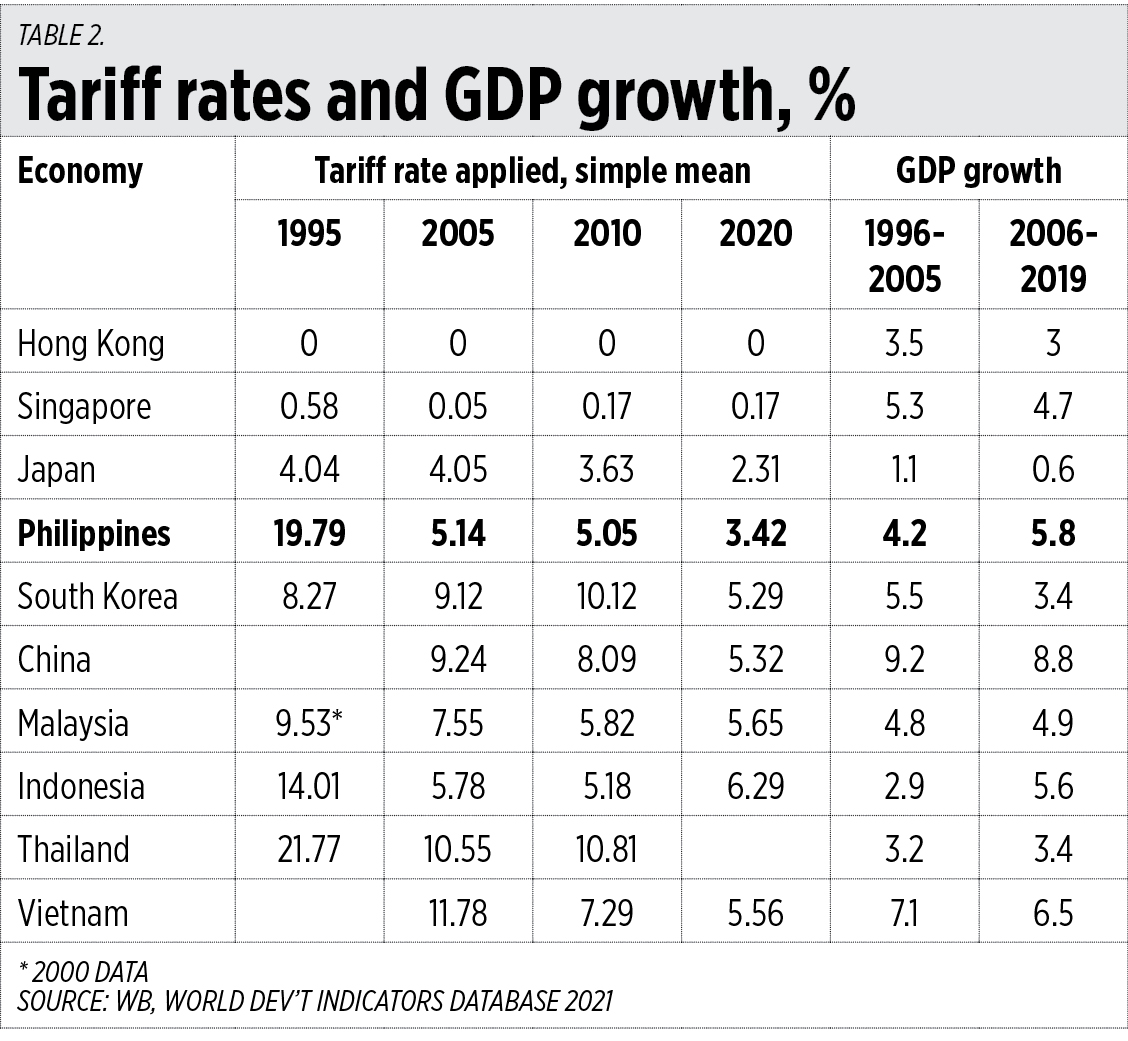 So, the rationale to impose, even institutionalize, higher tariffs on imported cement from Vietnam or other neighbors in the region is weak. Free trade is pro-consumer and pro-construction industry.

TRANSPORT CONTROL AND LTFRB
As the economy further opens up, the mobility of people and goods becomes busier. But oil prices have been rising high so people look for alternative transportation and minimize driving their cars.

When transport competition and choices are limited and restricted, commuters are penalized. And existing players — those accredited and authorized by government — are favored at the expense of the public.

One result of reduced competition in land transportation is higher inflation in the sector relative to overall inflation. This is shown by data from 2018 to 2022 except in 2019 (Table 3).

Like the need for free trade in cement, rice, appliances and gadgets, we need more competition in land transportation. Government should step back from cap and control, and open up the sector to more players, more competition, and give more choices, more options to more commuters.