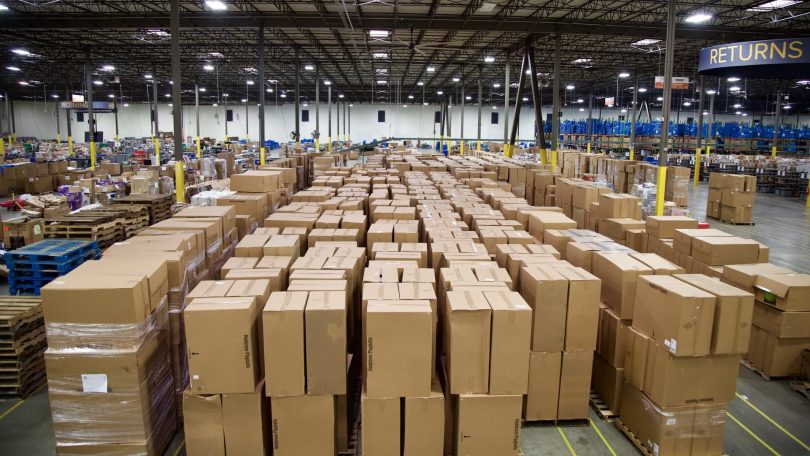 As major retailers Walmart and Target deal with waning demand from the consumer, warehouse capacity remains tight across the U.S. and inventories continue to pile up.

Walmart’s announcement this week that it was cutting its quarterly and full-year profit guidance is the latest retail casualty, showing inflation’s impact on the consumer and a shift in spending patterns that can whipsaw even the largest retailers. The company said it had to cut prices at its stores to reduce excess inventory.

That followed Target’s slashed forecast for the second quarter last month, which it attributed to having too much merchandise, and particular categories, such as small appliances, that saw a drop in demand.

The tight warehouse situation is not likely to change, according to In Warehouse Quote’s latest Warehouse Pricing Index (WPI). U.S. national vacancy rates are around 3%, and in port markets, the availability of space is around sub-1%.

“It’s really incredible,” said Ben Hagedorn, CEO of Warehouse Quote in an interview that took place before Walmart’s announcement this week. “We’ve also seen a 20% year-over-year rate increase for warehouse space, so we are seeing significant inflation there. We are also reporting seven consecutive quarters of positive net absorption. Warehouse capacity for imports remains to be an issue across the U.S.”

Items being stored in warehouses, according to Hagedorn, are the typical seasonal items and durable goods like appliances.

Hagedorn said the broader trends his firm is seeing inside the warehouse are a transition from the “just in time” to the “just in case” mentality among buyers, and inventory-to-sales ratios “continuing to go up across the industry.”

Workers move boxes in the warehouse at a Wal-Mart Stores.

“Durable goods are sitting a little longer than initially anticipated,” Hagedorn said. A second factor, which he said is seasonal and is always the case this time of year, is the early buildup of Q4 inventory for holiday sales.

“If the last two years taught us anything, it’s you have to make sure products are on the shelves and can be delivered through e-commerce and parcel delivery,” he said.

Other major retailers who have reported high inventory levels have said they are comfortable with the buildups and won’t face markdowns. In late May, Dick’s Sporting Goods reported inventory levels as of April 30 up 40.4% from a year earlier, but said it was “closely controlling inventory levels,” and wouldn’t end up with excess merchandise and markdowns.

The WPI showed the Southwest and Northeast lead the U.S. in the increase in warehouse prices. Freight historically stored in California was transported to alternative locations including Arizona, Texas, and New Jersey, creating a surge in rates in these regions.

One WPI participant on the West Coast said the biggest struggle they were facing was finding additional industrial warehousing space to support and process the volume of containers they were seeing coming in.

Hagedorn told CNBC that labor, in addition to consumer demand, is influencing the national vacancy rate of warehousing.

A Midwestern warehouse WPI network partner cited a 23% increase in labor rates year-over-year (Q1 2021- Q12022). In Michigan, labor shortages resulted in an average of 5% unfilled open positions per month over that time period. “We expect to continue experiencing labor/staffing and warehouse capacity issues through the 2022 calendar year,” the WPI network partner said.

Hagedorn told CNBC that the current state of the warehouse market has led to a workforce issue never before reported by the Bureau of Labor Statistics: warehouse and storage jobs have eclipsed trucking jobs.

“That has never happened before. … Part of that is being driven by e-commerce demand. It takes more people to execute commerce than traditional retail fulfillment,” he said.