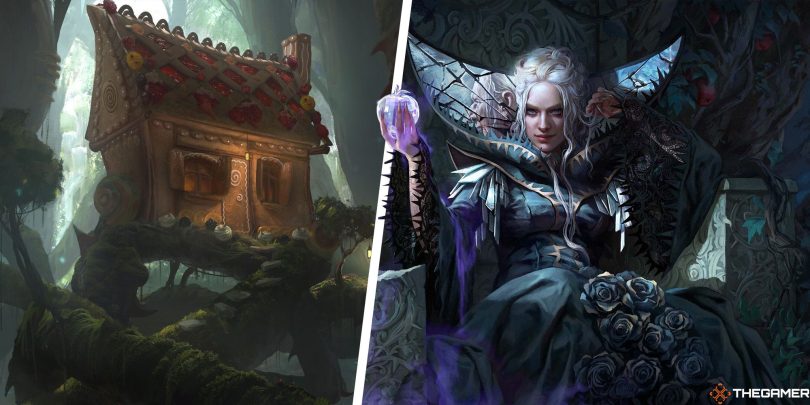 While Wizards Presents gave us plenty of surprises for Magic: The Gathering in 2023, one of the biggest shocks was that Wizards has seemingly catered to me, and me alone, by producing a set I’d predicted almost two years ago, in one of my favourite settings the game has ever produced. With Wilds of Eldraine, we’re heading back to Magic’s fairy tale-inspired world, and I couldn’t be happier.

More than just being one of my favourite settings, Wilds of Eldraine helps solidify Eldraine as one of Magic’s most unexpectedly vital settings. More so than even big names like Ravnica, Zendikar, Dominaria, or Innistrad, Eldraine is becoming the glue that holds Magic together.

RELATED: Magic: The Gathering Is Channeling The MCU For Its 2023 Line-Up

To understand the importance of Wilds of Eldraine, it’s important to understand the history of Eldraine. While it’s colloquially known as “the fairy tale world”, Eldraine actually started life as two different sets: one based on Arthurian legend, and the other on more Hans Christian Anderson-style fairy tales. Before long, it was decided that the Arthurian themes of the original Throne of Eldraine weren’t enough to carry a whole set, and so Eldraine’s two halves – the Arthurian keeps and castles, and the fantastical, fairy tale wilds – were merged into a single set that became the Throne of Eldraine we saw hit print.

While Throne of Eldraine was a home run in terms of flavour, many of us have long wondered about what we missed out on. The set was heavily focused on the Arthurian half of the mashup, with the ‘Wilds’ relegated to a place only really mentioned in the supporting story instead of in the cards itself.

With Wilds of Eldraine, Wizards has the chance to unleash that held-back fairy tale imagery and really push it to its limits. Instead of competing with Arthurian knights, castles, and courts, we’re venturing into the world of fae and fable. Witches in their huts, woodland critters having adventures, and centuries of folk tales and stories, unshackled from an entire second mythology on top of it.

It’s not just the aesthetic possibilities of Eldraine that make Wilds of Eldraine so important, though. Whether Wizards has intended it or not, Eldraine has become a ‘palate-cleanser plane’. By having a world so rich in easily-recognisable imagery, it has become the perfect way for Magic to cool off after massive, lore-heavy events.

Throne of Eldraine was the first set to launch after the War of the Spark brought the Nicol Bolas arc to an end. We’d just seen the death of Gideon Jura, Ugin all but vanished from the Multiverse, Amonkhet and Ravnica were both completely in ruins. We had years of super heavy story beats, and needed a break. A nice breather before we headed off into whatever big baddie was on its way to threaten everything next.

What we needed was a world that we’d never seen before, where there was little risk of any of the major players of the War bumbling in and bringing their problems with them. But we also didn’t want the mental load of having to process another new Ixalan, Amonkhet, or Kaladesh. We needed somewhere immediately recognisable, and those familiar hooks of fairy tales and the most stereotypical fantasy knights possible helped make Eldraine a comfort right from the get-go. We’d never been there, and yet it effortlessly felt like home.

That big bad turned out to be the Phyrexians, who, by the time of Wilds of Eldraine’s launch next year, will have spent over two years waging war on the entire multiverse. The first half of 2023 is likely going to be particularly intense, with a return to the literal ‘machine hell’ of Phyrexia being followed by two different sets focusing on the large-scale conflict of the March of the Machine. We’ve already seen the corruption of two of the game’s most beloved planeswalkers in Tamiyo and Ajani, and the likelihood of them being the only ones is incredibly slim.

What better way to recover from the March of the Machine and two years of following an ever-complicating conflict spread across half a dozen worlds than returning to the plane that helped us breathe after the War of the Spark? This is Wizards’ idea of aftercare after some of the most violent, intense scenes Magic has had in decades.

Eldraine is a buffer. Eldraine doesn’t have to worry itself with the same Magic lore considerations as, say, Phyrexia or Dominaria have to, because it’s built on a stable foundation of comforting fairy tale references and cheesy swords-and-sorcery fantasy. It’s Magic at its purest, free of Phyrexians, Eldrazi, or Nicol Bolas. And with so much potential unexplored, maybe it can distract us from the inevitable heartbreak of March of the Machine with some goofy woodland critters.

NEXT: MTG’s Lost Caverns Of Ixalan Could Make Or Break Magic’s Dinosaur World