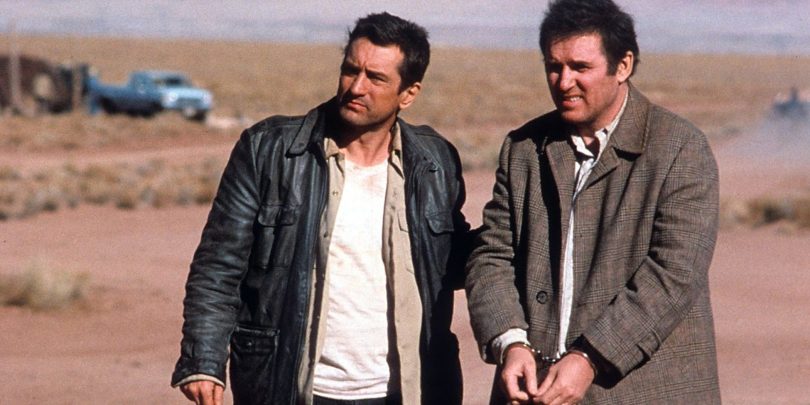 In theory, action comedy should be one of the most wildly entertaining movie genres. Audiences get the nail-biting excitement of car chases and the rib-tickling fun of inter-character banter all at once. But it’s rare that an action comedy has both the visceral thrills of an action movie and the laugh-out-loud hilarity of a comedy movie. They usually err more on one side than the other. Martin Brest’s 1988 masterpiece Midnight Run is a rare example of an action comedy that’s both exhilarating and hilarious. The movie could aptly be described as Lethal Weapon meets Planes, Trains & Automobiles.

Like John Hughes’ comedy classic Planes, Trains & Automobiles, released a year earlier, Midnight Run centers on a pair of mismatched travel companions taking a nightmarish trip across the country. The only difference is that one of them is a bounty hunter and the other is a mafia accountant on the run. On their cross-country journey, while they constantly bicker with each other and face endless obstacles, gunmen on both sides of the law are trying to kill them.

Robert De Niro stars as bounty hunter Jack Walsh opposite Charles Grodin as Jonathan “The Duke” Mardukas, the mild-mannered fugitive he’s determined to bring in. The Duke has embezzled $15 million from the mob boss who ran Jack out of Chicago, and Jack is promised $100,000 if he can get him to Los Angeles alive. Jack quickly tracks down the Duke and gets him on a flight back to L.A., but the Duke claims to have a fear of flying and his ensuing panic attack gets them kicked off the plane. So, with the feds, the mob, and other bounty hunters on their tail, Jack and the Duke embark on a treacherous road trip across the United States via trains and automobiles.

Despite the fact that neither of the characters is a cop, Midnight Run exhibits all the hallmarks of a traditional “buddy cop” movie. Jack and the Duke have polar-opposite personalities – the former is a tough-as-nails hothead while the latter is a timid nerd – who have to overcome their differences when they’re stuck together for an indeterminate amount of time. The pressure of life-threatening danger forces them both to confront their innermost emotions, which brings them closer together.

Much like Steve Martin’s Neal Page and John Candy’s Del Griffith in Planes, Trains & Automobiles, Jack and the Duke can’t stand each other at the beginning of Midnight Run. But by the end of it, they’re the best of friends. In Planes, Trains & Automobiles, Neal realizes that Del’s annoying friendliness is a result of feeling lonely following the death of his wife, and Del realizes that Neal is hiding a soft heart underneath his cranky, tightly wound personality. In Midnight Run, Jack realizes that the Duke is a lovable goofball who got mixed in with a bad crowd, and the Duke realizes Jack just uses anger and hostility to mask a deep well of emotional pain. In the opening act, Jack is only letting the Duke live because he’s worth more alive. But in the climactic showdown with gangster Jimmy Serrano, Jack is willing to put his own life on the line to protect him.

De Niro and Grodin share spectacular odd-couple chemistry in the lead roles. A lot of action comedies pair up a comedic actor in a wacky role and a dramatic actor in a “straight man” role: Eddie Murphy and Nick Nolte in 48 Hrs., Will Ferrell and Mark Wahlberg in The Other Guys, Jonah Hill and Channing Tatum in 21 Jump Street, Melissa McCarthy and Sandra Bullock in The Heat – the list goes on. But in the case of Midnight Run, the serious actor (De Niro) is the comedic personality and the comic (Grodin) is the “straight man.” Grodin’s dry portrayal of the Duke provides a deadpan foil for Jack’s short fuse.

There’s plenty of fun to be had in Midnight Run, from De Niro and Grodin bickering through an intense helicopter chase to Joe Pantoliano’s turn as an exasperated double-crossing bail bondsman, but there’s also a moving emotional throughline. The Duke talks Jack into confronting the feelings he denies and reconnecting with his estranged wife and daughter. Jack becomes endeared to the Duke and opens his mind from blindly labeling him as a criminal to seeing his sympathetic side of things. Without giving away the ending, the final interaction between Jack and the Duke – after they’ve both stuck up for each other over the course of their incredible adventure together – really tugs on the heartstrings, and the emotions are truly earned.

For fans of action movies, fans of comedies, and especially fans of action comedies, Midnight Run is a must-see. De Niro and Grodin give two of the funniest (and most touching) performances of either of their careers and Brest, much like he did with fellow ‘80s gem Beverly Hills Cop, finds the perfect intersection between plot-driven action and character-driven comedy.

MORE: This Underrated Gem Is A Cross Between Coming-Of-Age Movie And Action Thriller