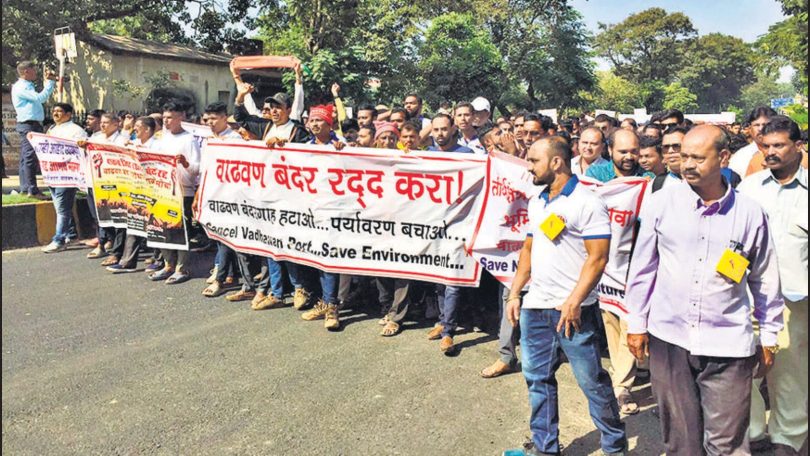 Mumbai: Thousands of fishermen, adivasis, farmers and other residents from Palghar, Thane and Mumbai gathered at Azad Maidan between 11 am and 5 pm on Monday to demand a complete rollback of the proposed Vadhavan Port project in Dahanu taluka. According to the police, the crowd ranged somewhere between 8 to 12,000 people.

The protest – planned under the banner of ‘Chalo Mumbai!’ – by seven organisations representing the interests of indigenous peoples in the region, was held on World Fisheries Day.

Resistance to the project from local communities has been gaining steam in light of recent developments and statements by deputy chief minister Devendra Fadnavis, who has vowed to pursue the port’s development aggressively.

“We are not standing behind you in this fight. We are right beside you,” Samant said, addressing the gathering.

Estimated to cost ₹65,545 crore, the Vadhavan port is proposed to be the largest port in Asia and is part of the Centre’s Sagarmala programme. It had earlier been called off by the Dahanu Taluka Environmental Protection Authority considering the potential damage it could cause in the region which has been declared ‘ecologically fragile’ since 1991.

However, the proposal for the Vadhavan port has been revived once again with a recent MoEFCC directive declassifying ports, harbours and jetties as “industrial activities” to allow them the Dahanu eco-sensitive zone (ESZ).

Several communities are strongly opposing the proposed port for many reasons, including fears of pollution, loss of common lands, natural biodiversity, loss of traditional livelihoods and risk of flooding and inundation of coastal villages.

“The proposed port will thus lead to the collapse of an entire self-sustaining economy in the region, thereby displacing a huge number of fishermen, small-scale industries, farmers and adivasis,” the Vadhavan Bunder Virodhi Sangarsh Samiti – who is spearheading local resistance – said in a statement.

Representatives from these organisations also met with chief minister Eknath Shinde on Monday evening to officially present him with their demand. Though Shinde did not speak with them at length, he posed with them for a photo-op and promised them more time to discuss their concerns in detail later this week.