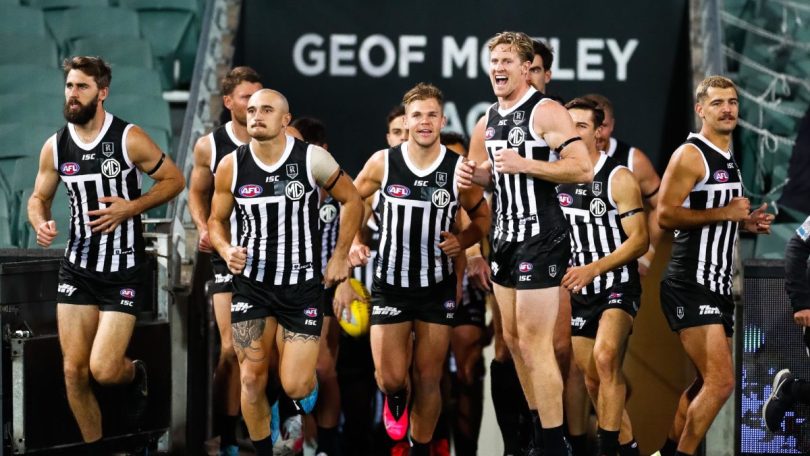 In recent seasons, the jumper debate between Collingwood and Port Adelaide has been a hot topic for AFL fans and journalists.

Recently, the Power put forward another request to wear their ‘prison bar’ guernsey for the upcoming Showdown against Adelaide in Round 23.

It seems the conversation has been heavily simplified to a biased argument between the two fanbases of each club, with others effectively weighing in based on which of the two teams they hate less.

Admittedly, you probably couldn’t pick two worse fanbases to have this debate with, with both clubs possessing some of the most fiercely loyal fans in the sport.

This might seem like a simple argument, but is far from it. In order to address the roots of the topic, some facts need to be addressed which are often forgotten by both fanbases and the media, whether to twist the narrative or simply because most people cannot be bothered to research things before voicing an opinion.

From the beginning of the club’s history in 1892 and continuing into the inception of the VFL five years later, Collingwood wore black and white stripes, virtually identical to the current design.

The home game jumper of the club has varied in minor details over the course of its history, but has always been based around the black and white stripes, never introducing a third colour.

In contrast, between 1870 and 1901, the club wore several different guernseys which ranged from blue and white hooped jumpers to a completely pink outfit, but these designs never included any black and white stripes or any black in general. It wasn’t until 1902 when the club adopted the Magpie emblem, and their first black and white striped guernsey… 10 years after Collingwood was established with this identity.

Their new black and white striped look became known as the ‘prison bar’ uniform due to the use of around half a dozen skinny stripes in comparison to between two and four wider stripes from Collingwood. With the occasional change, that was the jumper they used up until joining the AFL in 1997.

One point that must be mentioned is that the South Australian representative team between 1881-1906 were the first known football club in Australia to wear black and white. Whether Collingwood ‘stole’ this design upon establishment in 1892, as current Port Adelaide chief Brian Cunningham believes, is unlikely and cannot be known.

Black and white stripes are hardly a revolutionary design, though – almost every sporting league in the world has a team with them. This idea is completely separate to Port Adelaide and the SANFL and holds no weight in this conversation like some suggest.

When Port Adelaide entered the competition, a binding agreement was signed between the club and Collingwood, giving up the black and white colours and Magpie emblem within the national competition.

In 2003 the AFL introduced an annual Heritage Round where teams were permitted to wear any style of guernsey from their history. For the initial season, Port Adelaide wore a black and white prison bar guernsey from 1914 which was perhaps the furthest from the Collingwood jumper than any other black and white style outfit in the history of the club.

Still, it was met with contention; so in 2004, the Power donned one of the earlier mentioned magenta and blue jumpers seen in the 1800s. In 2005 the Power wore a white guernsey with blue hoops, which was their first guernsey ever worn in the SANFL in the 1870s.

In 2006, the AFL Heritage Round adopted the ‘electrifying eighties’ theme, which meant the Power were forced to sit out because their only guernseys in the 1980s were black and white ones too similar to Collingwood.

To ensure the successful and peaceful continuation of the heritage round – already a popular one amongst AFL fans – an agreement was signed by several parties which read:

“The Port Adelaide Football Club has the option to wear a black and white striped Heritage Guernsey for all AFL Heritage Round games allocated as Port Adelaide games only. The exception is a home game against Collingwood.”

The AFL Heritage Round fizzled out and its last official season was in 2008. Several teams have continued to wear throwback guernseys intermittently since then, but not in relation to any official league-wide Heritage Round.

Fast forward to 2020 and the AFL, with support given from Collingwood, allowed Port Adelaide to wear the prison bar guernsey during a Showdown, given that the club was celebrating its 150th anniversary. This sparked debate whether or not the Power should be able to wear the guernsey in future Showdowns and potentially other games, with Power president David Koch suggesting that part of the 2020 agreement was to continue discussions around allowing Port to wear the prison bar guernsey more frequently.

Koch has gone on to suggest that the 2007 agreement be effectively invalidated due to the discontinuation of the Heritage Round, even implying that McGuire knew this would eventually happen and tricked Port Adelaide into signing the agreement. Koch elaborated to suggest this is an example of Victorian bias within the AFL.

Since then, the debate has evolved into a war between Collingwood and Port Adelaide fans as well as past and present club officials rather than who it really is between – Port Adelaide and the AFL.

McGuire, Koch and outspoken former Power player Kane Cornes have spearheaded the debate in the media for their respective sides – hardly people you want representing you when rationality must be maintained. The three have aided in turning the conversation into a childish, insult-laden fight and as a result the topic has twisted into something it isn’t. 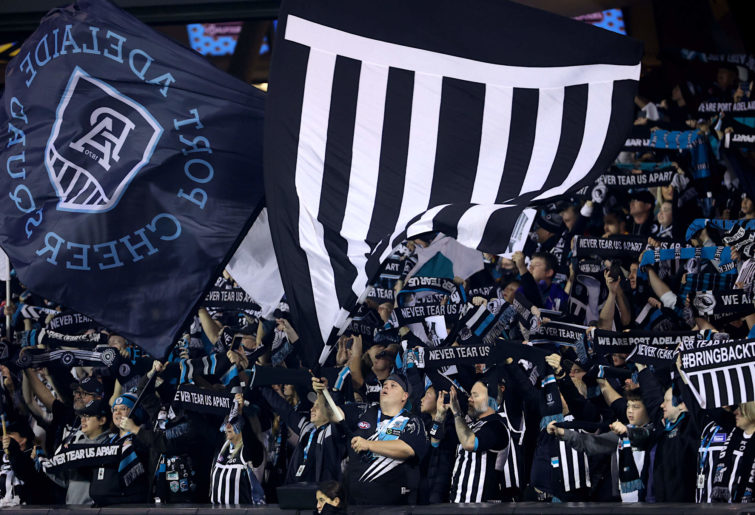 The fact of the matter is Port Adelaide signed agreements and accepted lucrative deals in the 1990s to introduce the teal colour into their uniform and adopt the Power emblem. In doing so, they established that the Magpies and the Power were separate, split entities which were tied only by the history of the club and the fact that the SANFL team acts as the reserves team for the AFL side.

Admittedly, however, the 2007 agreement was a step toward allowing Port Adelaide to recognize their origins as an organization and one that should be revisited due to the fact that the Heritage Round no longer exists.

Personally, I think it’s both plausible and a great idea for Port to wear their prison bar guernsey in Showdowns twice a year. This is what most fans want – it is logical and allows the team to honour the history of the club from which they derived.

It’s probably only a matter of time before the AFL approves the prison bar guernseys for Showdowns, and this has my full support.

Most logical Collingwood fans (yes, we exist) that I’ve spoken to think the same way.