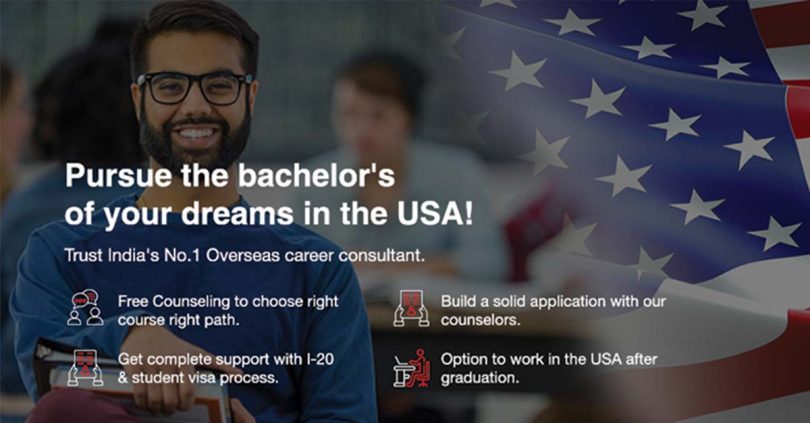 Why study in the USA?

The American undergraduate education system is based on the idea of liberal arts and sciences. You have the option of studying any of the numerous subjects along with your field of study. After you have completed a certain number of credits in your chosen field of study, you will be awarded a Bachelor’s degree.

You should know something more about study in USA. The credit hours are equivalent to the number of hours spent each week in the classroom. Every study program has a specific number of credits, and each university has its own criteria for the number of credits required to graduate. The degree for Bachelor’s in USA takes four years to complete.

The first step to pursuing undergraduate studies in the United States is researching your choices and finding a university that is suitable for you.

Top 10 Universities for a Bachelor’s in USA

Here are the top 10 universities for a degree of Bachelor’s in the USA:

Universities for Bachelor’s Degree in the USA

The detailed information on the top 10 universities offering Bachelor’s degree in the USA is given below.

Each year, over a thousand bright students join the California Institute of Technology, or as it is fondly known, Caltech. The university is known for its research work. Approximately 90% of Caltech’s students pursuing undergraduate studies participate in research projects that last from 3 to 4 months.

With 300 faculty members and approximately 600 research scholars, the academic staff at Caltech give their complete attention and resources to discoveries and new challenges. Teachers collaborate with students to create an interdisciplinary learning environment.

The requirements for Bachelor’s at Caltech are given below:

Stanford University has the largest campus in the USA. It has more than 700 buildings. Close to 97% of the undergraduate students live on campus. There are more than 2,000 faculty members, with 22 Nobel laureates among them.

Here are the requirements for Bachelor’s degree at Stanford University:

MIT or Massachusetts Institute of Technology is one of the best institutions to pursue a Bachelor’s degree in science and technology and also cultivate creative thinking.

Some of the significant results due to research at MIT include the chemical synthesis of penicillin, high-speed photography, inertial guidance systems for space programs, the first biomedical prosthetic device, and the magnetic core memory for digital computers.

The alumni of MIT have established companies like Intel, Texas Instruments, McDonnell Douglas, Bose, Qualcomm, Dropbox, Genentech, and others.

Here are the eligibility requirements for a Bachelor’s degree at MIT:

Princeton University offers research facilities with liberal arts courses. The study courses combine study, with seminars or lectures initiated by students on a broad range of subjects. The University has more than 1,100 faculty members in 34 academic departments, and 75 centers and institutes.

The requirements for Bachelor’s degree at Princeton University are given below:

Harvard University is one of the popular Ivy League schools in the USA. It was established in 1636, making it one of the oldest universities in the US. The university has a large academic library with 80 libraries. It includes a division of Continuing Education, that is, Harvard Extension School and Harvard Summer School.

It boasts of 48 Pulitzer Prize winners and 47 Nobel laureates. The alumni also include 32 heads of state, who have graduated from Harvard. The famous personalities who studied at Harvard are Theodore Roosevelt, John F. Kennedy, Bill Gates, Barack Obama, Mark Zuckerberg, and many more.

Here are the requirements for a Bachelor’s degree at Harvard University:

The research at Yale University has led to significant contributions to the medical and health sector. Some of the achievements include antibiotics and the use of chemotherapy to treat cancer. The scientists at the university have identified Lyme disease and the genes causing high blood pressure, dyslexia, osteoporosis, and Tourette’s syndrome. The creation of the insulin pump for the first time and work on the artificial heart took place at Yale.

The requirements for Bachelor’s at Yale University are given below:

The faculty of the University of Chicago has an interdisciplinary approach towards research. It spans a wide range of studies from arts to education, medicine, and engineering. UChicago or as the university is fondly known is famous for its research. It has led to breakthroughs such as the discovery of the link between cancer and genetics, revolutionary theories of economics, and so on.

The University was co-founded by John D. Rockefeller, a famous American businessman. It combines an American-style undergraduate liberal arts college with a German-style graduate research university. Its success is evident in an undergraduate alumni population of more than 5,500 students.

The requirements for a Bachelor’s degree at the University of Chicago are given below:

The University of Pennsylvania has an investment of more than 700 million USD every year in R&D or research & development. It makes it one of the best research universities in the US.

The focus of research is on the fields of medicine, business, technology, science, and more. Penn was established on 1740 and was focused on the liberal arts and sciences, having 4 undergraduate schools.

Here are the requirements for a Bachelor’s degree at the University of Pennsylvania:

Johns Hopkins University is one of the oldest research universities established in 1876. It has approximately 20,000 students on its three campuses in Baltimore, Washington, D.C., and Montgomery County, Md., and institutions in the Baltimore-Washington area, Italy, and China. The main campus in Homewood has over 4,700 undergraduate students.

The requirements for a Bachelor’s degree at the John Hopkins University are given below:

The University of California, Berkeley Lab is reputed for its chemical research. It has discovered sixteen chemical elements, which gives it the fame of most discoveries in any of the universities in the world. The Manhattan Project was developed for the first atomic bomb with physicist J. Robert Oppenheimer as the scientific director at this university. Alumni, Faculty, and researchers have won 72 Nobel Prizes collectively and other prestigious awards.

The university has 14 colleges and schools, more than 120 departments, and over 80 interdisciplinary research units which are attended by a significant population of international students.

The requirements for a Bachelor’s degree at the University of California are given below:

*Wish to study in USA? Y-Axis is here to help you.

Why study in the US?

Here are a few reasons why you should study in the US.

The universities in the US like Stanford, MIT, Harvard, or Yale are crème de la crème, the best among the universities. There are more than 150 American universities and colleges that have earned their place in the global rankings according to the Times Higher Education, QS Rankings, TopUniversities, and others.

For those interested in quality education, an undergraduate degree from the US should be high on the preference list. There is something for everyone and you can enroll in any field or major you can think of.

The higher education system in America is inexpensive. You will discover a substantial number of affordable study programs. The annual tuition fees would be approximately 5,000 USD or less. On the other hand, you can find multiple study programs at Ivy League universities that easily go more than 50,000 USD per year.

The flexibility enjoyed by students in America is not common in most other countries. In many cases, you do not need to choose a major until the 2nd year of your study program. It is an advantage since many undergraduate degrees take four years to complete.

It implies that you can try out multiple subjects and classes, and go for what interests you.

Campus life in the universities can be described anywhere from vibrant to exciting or even over-the-top. Much similar to how it is shown in American movies or shows.

If parties do not interest you, don’t worry. You have the option to take up sports, join a club, be it, drama, music, or anything else. You can also support and volunteer for a cause that interests you.

While you study in USA, you will have the chance to see some of the most aesthetic and picturesque natural and man-made structures in the world.

From the Grand Canyon to the Yellowstone National Park, from the Golden Gate Bridge to the Statue of Liberty, from Alcatraz Island to the Mount Rushmore National Memorial. These and many other unique sights and structures are ready to leave you speechless.

Hopefully, the information given above provided you with the clarity to choose the best university for yourself.

How can Y-Axis assist you to Study in USA?

Y-Axis is the right mentor to advise you on Study in USA. It helps you with