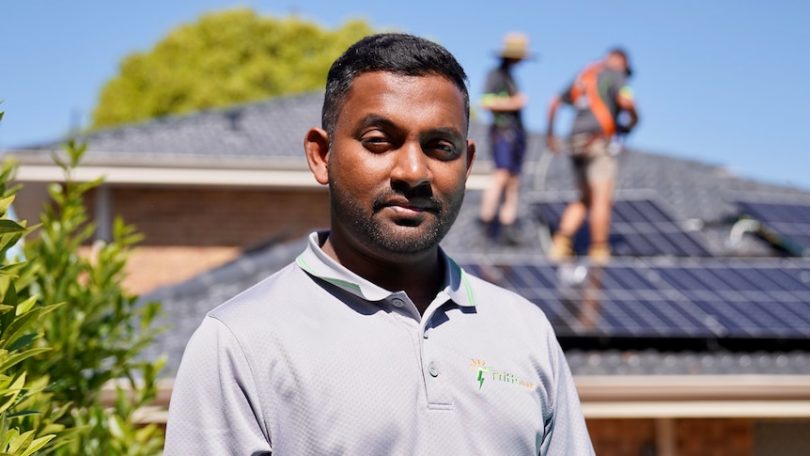 It might not feel like a ‘green’ job, but electricians are emerging one of the most crucial professions in Australia’s transition to renewable energy.

But researchers are warning crippling workforce gaps may prevent the Federal Government from meeting its emissions reduction targets in time.

In just eight years, it wants the vast majority of Australia’s energy to come from renewables.

This would require a huge workforce to construct and install the necessary infrastructure.

According to Infrastructure Australia, the biggest group of workers will be electricians, engineers and construction managers.

But it’s a workforce already facing shortages – not just because of the renewables boom, but because of the huge pipeline of other infrastructure projects currently underway in Australia.

In Western Australia, electrical engineer Abhinu Raghavan said demand in his business had increased by 250 per cent in two years, and he was expecting it to double again in coming years.

At the same time, he said it was becoming increasingly challenging to find electricians.

“So everyone needs more electricians, so there are shortages and to find electricians from the market will take a longer time,” he said.

He said his job advertisements, which used to yield applications straight away, were now having to be put up months in advance.

“I used to plan things two weeks ahead, but now I have to plan a month or two ahead to get enough workforce,” he said.

Researchers say a rapid up-scaling of the workforce would be needed for the government to meet its target of 43 per cent emissions reduced by 2030.

Chris Briggs, who is the research director for the University of Sydney’s Institute for Sustainable Futures, said he estimated the renewables industry would need around 15,000 new workers within five years.

He said growing the workforce would not be easy.

“It’s a very serious situation in terms of skill shortages and labour market,” he said.

“We’ve got a lot of training gaps when it comes to renewable energy, we’re trying to build new infrastructure in regional areas where there isn’t really any energy infrastructure at the moment.

“So there’s a range of challenges, which make it particularly difficult to try and scale up the workforce.”

Dr Briggs said the figures were also likely to underestimate the jobs required, as it did not factor in workers in WA or the Northern Territory outside the National Electricity Market (NEM), or energy market specialists.

He added, if Australia was to become the “energy super power” that governments were touting, this number would be five to 10 times higher.

The race against time

“I guess it’s a question about whether they can do it fast enough, because it needs to happen quite quickly.”

Minister for Skills and Training Brendan O’Connor said the government was taking steps to address the shortages by providing funding to support 10,000 new energy apprenticeships.

He said it was also commissioning a workforce capacity study, blaming current shortages on the previous government.

“Building a clean energy workforce will require working with State and Territory Governments to invest in the skills sector to tackling the skills shortage crisis and boost economic growth, sustainability, and resilience,” he said.

In a statement, Infrastructure Australia said with adequate coordination the renewable workforce infrastructure and jobs could be prioritised.

Dr Briggs said he too was hopeful it could be pulled off.

But he said while the current measures were welcome, more would need to be done.

“For example, increasing the labour supply within these regional areas, so programs and schools to tap into the excitement and awareness of school students and create pathways for them into the renewable energy sector,” he said.

“There are also some best practice projects that are making really good use of First Nations communities, again, you need to build the pathways for that to happen.

“There’s just a range of other infrastructure re-training that needs to happen in the existing workforce to give them the skills and currency to come across a move between sectors.”