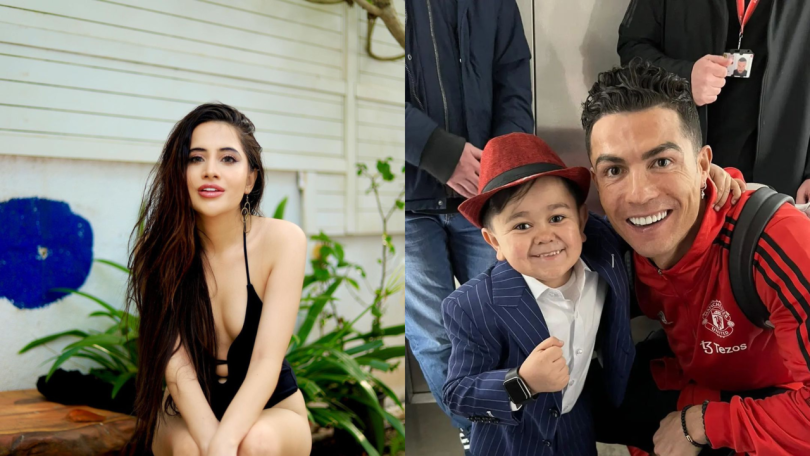 Uorfi Javed is a social media sensation currently. The TV serial actress who shot to fame with her stint in Bigg Boss OTT, has become the talk of the town due to her bizzare sense of style. While she tries to experiment with her outfits she has earned praises from a number of fans including Ranveer Singh. Her funny banter with the paparazzo often goes viral on the internet.
In a recent video shared by a paparazzi account, we could see her flaunting her bold black saree as she meets yet another social media sensation Abdurozik. Take a look!

The 18 yr old Abdurozik shot to fame with his funny memes and videos on social media which went viral, the most famous one being the ‘Bugir’ video in which the young influencer was eating a large burger as he called it a ‘burgir’.

Uorfi has appeared in a number of TV series after her Bigg Boss OTT stint. She is well-known for playing Avni in the film Bade Bhaiyya Ki Dulhania. In addition, she played the roles of Aarti in Meri Durga, Bella in Bepannaah, and Mira in Puncch Beat Season 2, all of which were shown on ALT Balaji. Uorfi portrayed Chhaya in Star Plus’s Chandra Nandini from 2016 to 2017. In Saat Phero Ki Hera Pherie on SAB TV in 2018, the actress portrayed Kamini Joshi. Uorfi Javed debuted in Yeh Rishta Kya Kehlata Hai as Shivani Bhatia in 2020. She subsequently appeared in Kasautii Zindagii Kay as Tanisha Chakraborty.