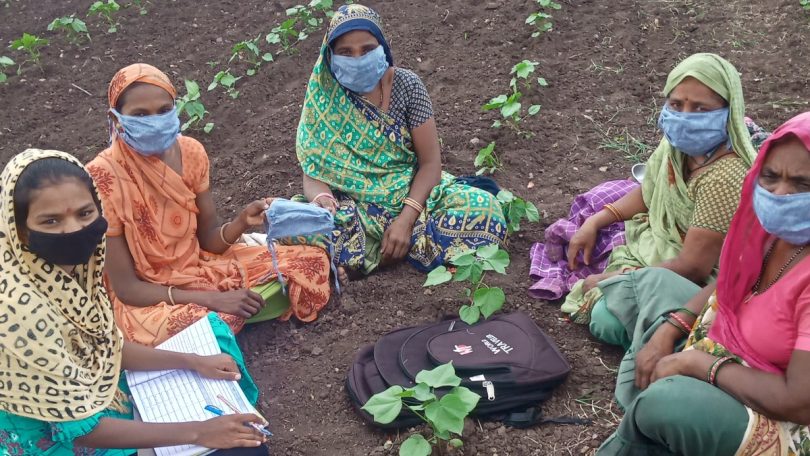 Editor’s note: This story is one in a series of articles detailing the work of Direct Relief-supported organizations and their response to the health impacts of climate change.

SEWA, the Self-Employed Women’s Association, is a pan-Indian trade union empowering women workers across numerous fields through organizing, education, capacity building, and health and basic needs provision. With a membership of over 2.1 million women, SEWA swung into action when widespread flooding and heat waves hit India this summer. Direct Relief supported the organization with funding to alleviate the effects of these climate change-related disasters.

From coordinating evacuations in flood-affected areas in the middle of the night to placing young women workers in new jobs to setting up a telemedicine network, SEWA and Direct Relief responded to extreme weather events that impacted self-employed women and their families across each of the 18 states where the SEWA operates.

Direct Relief has provided SEWA India with a $250,000 grant for Covid-19 response and $75,000 for heat wave and flooding relief. An additional $500,000 grant is currently helping SEWA develop a team of around 120 healthcare master trainers across India who will assist with livelihood rehabilitation and non-communicable disease care.

Working Across India for Health

In the state of Assam and Anand, Gujarat, SEWA focused this summer on disease prevention, water treatment, and food, medication and hygiene distribution after the flooding. SEWA also worked to furnish 100,000 street vendors, salt pan, construction, recycling, and waste workers who suffered from burns and heat-related illness with solar water coolers and oral rehydration salts.

SEWA worked individually to provide care both during and after catastrophic conditions hit. The organization strives to remain well-connected with the needs of its members. Local coordinators manage grassroots organizers who canvass wide areas, carrying out door-to-door outreach. Much of the organization’s vision and planning comes directly from the people it serves. This means SEWA can distribute aid according to community needs.

Understanding the needs and questions of diverse members enables SEWA to assess what situations can be addressed locally and which need to escalate to leadership. In every village, SEWA has a grassroots leader called an aagewan who is in touch with local constituents by phone and in person. The organization also works in close collaboration with the sarpanch, or village leader, to meet villagers’ needs.

Purnima Ben, Local Coordinator in Chhota Udaipur, spoke about urgent needs in the area after it was badly affected by floods in June and July. During the floods, members had trouble finding potable water, obtaining food, and getting clothing. Farmers’ crops were destroyed, and those engaged in animal husbandry found fodder and supplies washed away. There was no income to purchase feed, seed, and fertilizer. Many individuals suffered from health concerns; for instance, there was a spike in the number of fungal infections.

Local Coordinator Lalita Vasava Ben described how the floodwater came in at its highest levels at night. This made evacuation especially difficult. Farmers moving children, animals, and necessities in the darkness was challenging in her district.

In inundated areas, SEWA stepped in as soon as possible to help members access basic needs and purchased supplies for farmers. Chlorine tablets were distributed to reduce the chances of waterborne illnesses. To ensure that members benefited from existing government programs, grassroots organizers linked households with registration. Aagewans were trained on water- and mosquito-borne diseases and their prevention to ensure people started boiling water and using mosquito nets to protect themselves.

During the first wave of Covid in 2020, SEWA started a telemedicine system. When members have a primary care issue, they call the SEWA number, and a physician responds by voice or text. The system grew in demand in response to the floods and extreme heat. Going door to door, organizers called SEWA telemedicine and connected people with the care they needed.

Text groups also kept people in touch. With more than 400 million active users in India, WhatsApp is the communication platform of choice for many. Reactivating chat groups created during Covid, members connected to identify problems in their communities. These interventions directly assisted in numerous families’ survival.

Floods magnified challenges from Covid, which had taken a widespread toll on laborers’ economic status. Members’ livelihoods were just normalizing as workers finally achieved parity with what they had earned before the pandemic. But “many households had to be evacuated,” Lalita Ben said through her translator. “For 15 days, they were provided shelter, grains, and food items to sustain them,” but work was disrupted across the area.

Purnima Ben recounted how SEWA worked to create alternate sources of income and employment opportunities for younger members with livelihoods hindered by the floods. Hundreds joined healthcare efforts. Receiving training on how to use medical devices, for example, these young workers then went from household to household in impacted villages assessing the burden of diseases, linking people with treatment, and providing educational information. To ease physicians’ caseloads, workers distributed over-the-counter medications, like paracetamol and decongestants.

Alka Shah, a Local Coordinator from Anand, detailed how during temperature spikes that followed the deluge, SEWA opened camps in rural areas where people could access care. Fifty to 150 people came each day the clinics were open. In these pop-ups, volunteers would assess health complaints. Members suffered from waterborne diseases, fungal infections, non-communicable diseases (NCDs) like diabetes or hypertension, and heat-related illnesses. All were connected with a healthcare provider and given access to water and basic care.

Lalita Ben and her team completed several surveys to assess the flood’s impact on healthcare, damage done to housing, loss of crops, and destruction of farms. Using this data, they appealed to the local government for compensation. Meeting with success, close to 1,500 households were offered varying amounts from â¹5,000 to â¹9,500 INR (roughly $60-$115 USD), even those in debt, depending on the damage to their homes.

Another unique challenge in Anand was snakes. At least four snakebite cases were documented when members used outdoor bathrooms after dark. SEWA took stricken individuals to the hospital and then distributed close to 500 solar lights so when members went out at night, they could see if there was a risk of being bitten. Solar lights work particularly well in areas with low to no access to grid-based power, providing sustainable, carbon-neutral illumination.

The floods were devastating, and the heatwaves that followed also wreaked havoc.

Heena Dave Ben, District Coordinator in Srinagar, Kashmir, talked about the saltpan workers whom SEWA unionizes. These workers labor in the desert with temperatures as high as 51 degrees Celsius (124 degrees Fahrenheit). In this extreme heat, their health suffers and options for cooling even drinking water are limited. “People avoided drinking water because it was so hot,” Heena Ben said.

Heena Ben and her team conducted participatory rural assessments so members could discuss the reasons why they think heat waves are happening more frequently, as well as what possible solutions might be. After surveying multiple members in desert areas, results show that people know heatwaves will be more frequent in the future. “What we learned from these areas is that in addition to global warming, there are several local reasons at the village level contributing to a rise in temperature. There are more tarred roads instead of mud. People are using tractors instead of tilling by hand. While these are signs of progress and development and SEWA is in support, we are trying to think about alternatives so that progress, climate change, and development can be considered together,” Heena Ben said.

In addition to conducting evaluations, the team is raising awareness about the long-term benefits of sustainable solutions. Some alternatives include using solar tractors instead of diesel, cooking with biogas, and implementing vermicomposting (using earthworms to decompose food waste) to create lower-impact fertilizers. More than 50% of SEWA members are directly or indirectly linked to agriculture. So, organizers are looking to stop the use of chemicals and fertilizers that contribute to global warming and instead switch to organic. In many villages, Dr. Hebbar describes, there are centers for women to connect with livelihood opportunities to assist with this, like distributing organic fertilizers to farms at a local level. Productivity on these farms has already increased, leading to a growth in revenue and a surge in interest.

While focusing on being better prepared for future heat waves, SEWA organizers do encounter a limited understanding of global warming and climate change in rural areas. People are aware that temperatures have risen, and that there are changes in the climate. They can name factors contributing to these changes, but may not think about a global phenomenon in which things done locally create problems on a massive scale. That said, aagewans are raising awareness about climate change, carbon credits, clean water, air, and skies.

Aagewans and SEWA-supported master trainers attend to a key problem in India: there is little linkage between government and private healthcare facilities and the communities they serve, according to Prutha Ben, who works in urban education, training, and health activity for SEWA. Facilities often lack knowledge of how to best assist local populations. Direct Relief funding has been invaluable in creating cadres of leaders who can connect health knowledge with the villages they serve.

“In addition to being able to respond effectively to natural disasters and climate change, what we have been able to do is to ensure that care is delivered at the doorstep,” due to Direct Relief’s aid, said Prunima Ben. Linking physicians with pop-up clinics, point-of-care testing, and trainers, key medical services can reach the household level in a systematic, holistic way.

Direct Relief’s funding also supports the SEWA team as first responders. SEWA aagewans who distributed water, food, and supplies helped immediately address multiple needs. “When the government takes their time, it’s not as useful as when first responders get there. This has set into motion a long-term thinking process, and a plan is being created in conjunction with the community. We are learning their needs, with a system in place to brainstorm solutions together. This is vital,” said Heena Ben.