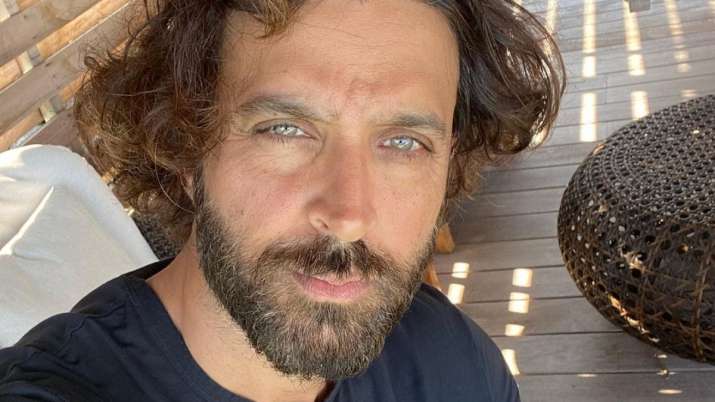 Vikram Vedha star Hrithik Roshan was at an event recently where he bowed down to touch the feet of his fan. The Bollywood actor’s heartfelt gesture has created waves on social media. Many are calling him a ‘humble superstar’ as the video continues to go viral on social media. Hrithik has recently launched the teaser of his upcoming film Vikram Vedha and with this video catching the attention of the netizens, the actor is once again trending. Vikram Vedha is one of the most-awaited films of 2022 and features Saif Ali Khan and Radhika Apte opposite Hrithik.

Hrithik Roshan is often referred to as the Greek god. He attended a private event recently looking extremely fit in athleisure. One of the fans came forward from the crowd and touched Hrithik’s feet when the actor was delivering the speech. this took him by surprise. Hrithik touched back that fan’s feet and shocked everyone present over there. As more and more people are coming across the video on social media, it has started to trend. On the work front, Hrithik will be next seen in the action drama Vikram Vedha alongside Saif Ali Khan which releases on September 30.

Reacting to Hrithik’s sweet gesture, a fan wrote in the comment section, “So sweet of you @hrithikroshan.” Complimenting the actor, fans called him a “very good superstar,” and the “most humble superstar (sic).”

Hrithik’s last release was War (2019), where he appeared alongside Tiger Shroff. It was a blockbuster. The actor is returning to the big screen three years after his last outing with Vikram Vedha, which is a remake of Vijay Sethupathi and R Madhavan’s neo-noir action thriller film of the same name. Director duo Pushkar-Gayathri, who helmed the original Tamil film, directed the Hindi remake of the film. The film’s teaser clocked well over 22.4 million views across all platforms in 24 hours after release. In addition, it has secured the top spot on YouTube and micro-blogging site Twitter’s trending list.

The upcoming Hindi film Vikram Vedha presents an intriguing story of a righteous cop Vikram (Saif Ali Khan) and menacing gangster Vedha (played by Hrithik Roshan). The look sported by Hrithik, consisting of stylish long hair and a heavy beard has also been appreciated by the fans. Many are speculating that it will set the box office on fire upon release. On the personal front, Hrithik has been in a romantic relationship with actress and singer Saba Azad.