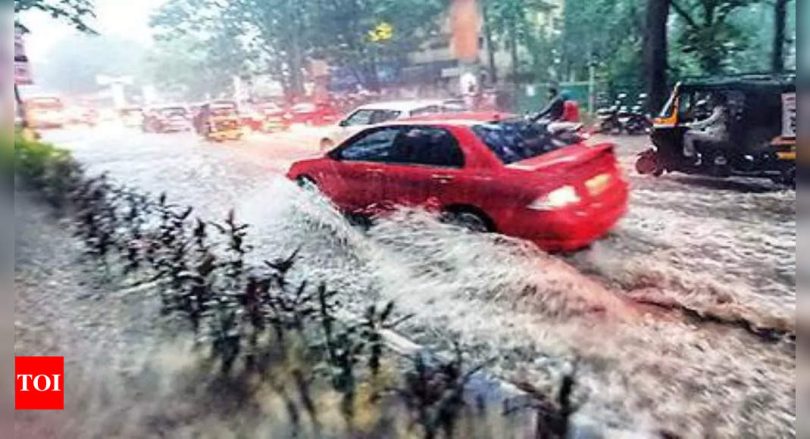 PUNE: Sunday’s one-and-a-half-hour deluge flooded roads across Pune, constructed using crores of rupees under the Smart City initiative, with so much water that it took hours to recede. At fault were the drainage systems across the civic limits that could not handle the volume. In many areas, garbage and plastic had choked the lids, preventing any flow into the channels.
Senior PMC officials said the storm water drains on the Smart City roads have been augmented. Dinkar Gojare from the PMC’s road department said, “Spots where chronic flooding used to occur have been repaired, the old drainage systems have been replaced and connectivity between small and large drains has been improved when these roads were redone.”
Other civic officials blamed the heavy showers in a short period for the knee-deep accumulation of water on Fergusson College Road, Jangli Maharaj Road, Shivaji Road, Karve Road and other arterial roads. They also said that the concrete drain lids, instead of the wrought iron grates, blocked rainwater from flowing into the storm water drains.
Activists said design flaws, poor implementation, zero maintenance of the roads and encroachments singularly caused Sunday’s waterlogging. They said the civic administration should tell citizens the parameters it uses for designing roads.
Officials must share whether heavy showers were taken into account when these roads are designed. If yes, then the implementation has failed,” Vivek Velankar of Sajag Nagrik Manch said.
Poor quality pre-monsoon works have caused waterlogging in the city, civic activist Qaneez Sukhrani said. “Chronic spots are not addressed properly, which is leading to repeated waterlogging. Audits should be carried out by senior PMC officials to fix the responsibility. The PMC administration is not responding to problems in a scientific manner,” she added.
Arterial roads across the city from Kothrud to Kalyaninagar and Aundh to Kondhwa, redone over the last decade, are based on the Urban Street Design guidelines. The norms lay out a “complete streets” system for transportation choices where every user group is a priority.
Angry citizens quoted the Pune Municipal Corporation’s Rs 8,592 crore draft budget for 2022-23 with a 25-year plan for a detailed project report for road network and the road department’s Rs 856 crore share when they sought answers to the flooding in their areas.
Model Colony resident Sayali Datar said, “Waterlogging has not been addressed fully even after designing of footpaths and parking lots on Fergusson College Road and Jangli Maharaj Road. Both arterial roads have been witnessing water accumulation following heavy spells of rain. A detailed audit should be conducted of all the roads that witness frequent waterlogging. Citizens suffer all the time when roads are not fit to use.”
Bank employee Shekhar Jadhav said Sunday’s deluge and inundation of almost all roads in the city points to the shoddy construction work of drains and storm water channels. “Many smaller roads lack the storm water channels which increase run-off and water stagnates on the road or in low-lying areas. The PMC must increase the capacity of these channels considering that intense spells are going to happen,” he said.