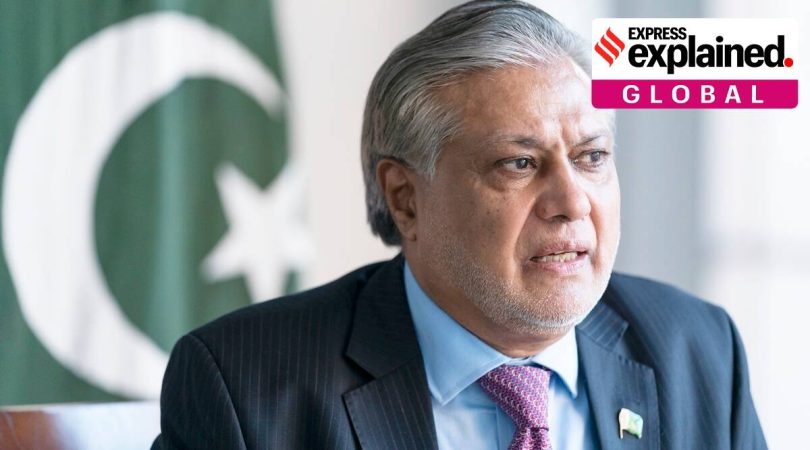 Pakistan’s Finance Minister Ishaq Dar announced on Wednesday (November 9) that the government would introduce interest-free banking in the country, marking a significant departure from its earlier opposition to the policy.

In a pre-recorded statement, Dar said that State Bank of Pakistan (SBP) and the National Bank of Pakistan (NBP) would withdraw the appeals it had earlier filed in the Supreme Court against the Federal Shariat Court’s (FSC) order to replace the conventional banking system with an interest-free one that would fulfil the injunctions of Islam within five years.

While the government had made significant progress towards developing an Islamic financial system between 2013 and 2018, Dar claimed, however it was unable to sustain the speed of transformation over the last few years. He added that it was the government’s priority to make decisions according to the teachings of the Quran and Sunnah, Dawn reported.

What is interest-free banking?

Islamic banking refers to banking activity that conforms to laws and values laid down by Islamic law or Sharia. The basis of Islamic finance is the rejection of usury (the levying of unreasonable high interest rates) while lending money, along with the requirement that there must not be any engagement with immoral businesses.

Interest free banking is a narrow concept within this system, that denotes a number of banking operations which avoid interest. Riba is the Islamic term for interest charges on loans, and according to the current interpretation, covers all interest — not just excessive interest. Under Islamic law, a Muslim is prohibited from paying and accepting interest on a predetermined rate.

As per Islamic banking, money can only be parked in a bank without interest and cannot be used for speculative trading, gambling, or trading in prohibited commodities such as alcohol or pork.

But, how can a bank work without levying interest?

While banking is premised on charging interest while lending, and paying interest on deposits, there are a number of financial institutions even in the West, that also structure their accounts in Sharia compliant ways. In 2015, Germany opened its first Sharia compliant bank in Frankfurt, BBC had earlier reported.

Various instruments are available for those who want to take credit from a Sharia compliant bank. In an Ijarah contract, a bank purchases the asset on behalf of the client and allows its usage for a fixed rental rate. After a mutually agreed time, the ownership of the asset is transferred to the client.

Another instrument is Murabaha, which means a sale on mutually agreed profits. In this financing technique, an asset is purchased by the bank at a market price and sold to the customer at a mutually-decided marked-up cost. The client is allowed to repay in instalments.

Musharaka refers to a joint investment by the bank and the client. Under the agreement, an Islamic bank provides funds, which are mixed with the funds of the business enterprise and others. The bank and the client both contribute to the funding of an investment of purchase, and agree to share the profit or loss in agreed-upon proportions.

What was the Federal Shariat Court’s (FSC) ruling

In April this year, a three-judge bench of the FSC said that Riba in all its forms was prohibited by Islam, and asked the government to to replace the conventional banking system by an interest-free one by December 31, 2027.

Established in 1980 during the government of General Muhammad Zia-ul-Haq, the FSC has the authority to determine whether Pakistan’s laws comply with the Sharia. The FSC gave the verdict this April, after the Supreme Court had referred the case back to religious court for its reconsideration in 2002, after the FSC in 1922 held Riba to be repugnant to Islam, Dawn reported.

While directing the government to establish an interest-free banking system and facilitate all loans accordingly, the FSC also stated that all forms of interest, either in banking or private transactions, are considered Riba, and thus against the teachings of Islam. According to The Express Tribune, with the FSC decision, Pakistan became the first Muslim country to officially declare modern bank interest as Riba.

Calling the prohibition of Riba the “cornerstone of the Islamic economic system, the FSC verdict said, “Therefore, we have decided that every loan which extracts any additional amount upon the principal from the debtor is Riba, hence, any transaction that contains Riba even at a slightest level, falls within the category of Riba thus prohibited”, PTI earlier reported.

Pakistan’s state-owned banks — SBP and NBP, along with three commercial banks had challenged FSC’s ruling in the Supreme Court, but have now withdrawn their appeals.

In a report submitted to the government in 2008, a committee headed by Raghuram Rajan had, without naming Sharia banking, suggested the need to have interest-free banking in India. “The non-availability of interest-free banking products (where the return to the investor is tied to the bearing of risk, in accordance with the principles of that faith) results in some Indians, including those in the economically disadvantaged strata of society, not being able to access banking products and services due to reasons of faith. This non-availability also denies India access to substantial sources of savings from other countries in the region,” the report said

The Reserve Bank of India (RBI) in 2016 had suggested that given the complexities of Islamic finance and various regulatory challenges involved, Islamic banking could be gradually introduced through the opening of an “Islamic window” in conventional banks.

While replying to a RTI query in 2017, the RBI however said that it had decided to not pursue the proposal for introducing Islamic banking in the country.