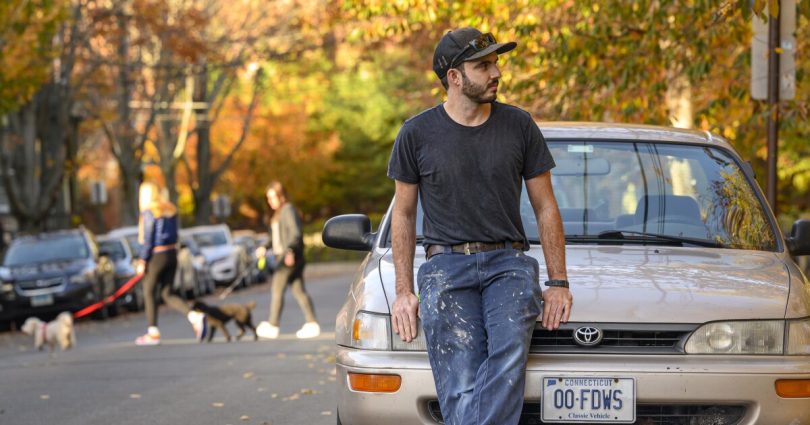 Ryan Zitnay’s car doesn’t have a lot of frills.

The 1995 Toyota Corolla is a drab, beige color, with plastic hub caps and windows that crank up and down. It’s the kind of car you’d expect, maybe, outside a grocery store. Not on a race track.

But over the years, it’s been Zitnay’s trusted companion. The 30-year-old inherited the car from a distant relative in 2015. He has logged more than 100,000 miles with the vehicle since then, traveling to California and back, down to Florida and up to New Hampshire and New York for camping and skiing trips.

“I’ve slept in it multiple nights,” said Zitnay, a carpenter originally from Newtown. “Not the most comfortable thing to do, but you know … I love this thing.”

And there is one feature that stands out. The Toyota has stark white vanity plates, signifying that, as far as the state of Connecticut is concerned, it’s a genuine classic.

“This thing seems to just keep on keeping on,” Zitnay said.

Nearly 80,000 vehicles in Connecticut have classic plates, ranging from antique Fords to motorcycles and camper vans.

That number is growing, according to records provided by the Connecticut Department of Motor Vehicles. It’s up more than 10% from five years ago, rising from 70,566 vehicles with classic plates as of the beginning of 2018 to 79,961 at the start of last year.

And alongside Chevys and Fords, there are plenty of 90s-era Toyotas and Hondas on the list — cars some might not think of as classics.

One explanation for the increase is that cars generally last longer today. Connecticut also has looser rules than some other states. Cars registered here can have classic plates once they reach 20 years old.

That means vehicles produced as recently as 2003 are eligible. Some other states, including Massachusetts and Rhode Island, set the bar a little higher, at 25 years old.

Steve Moskowitz is CEO of the Antique Automobile Club of America, which is thought to be the country’s oldest historical automotive organization.

He said as the hobby matures, it’s also evolving, making space for younger generations of car collectors. And that means welcoming a wider variety of automobiles: Toyotas alongside T-Birds.

“History changes your perspective,” Moskowitz said. “At one time, cars in the 40s and 50s were considered nothing but used cars. And now today, they’re the opposite.”

Moskowitz said his organization adheres to definitions set by another group, the Classic Car Club of America, which defines a “full classic” as a “fine” or “distinctive” automobile, made between 1915 and 1948, that was produced in limited quantities and generally high-priced or top end in its time.

Moskowitz said to make things easier, a few years ago, members of his club transitioned to using the term “collectible” to describe older vehicles in the hobby. It’s generally reserved for those 25 years old or older.

“Our club doesn’t get really too hung up on terms,” Moskowitz said.

Under Connecticut law, vehicles with classic plates are intended to be maintained in their original condition, but in practice, those guidelines aren’t strictly enforced. Most cars that are old enough qualify, even if they’re not being preserved for posterity.

Classic plates don’t actually provide special benefits. It’s mostly about bragging rights. But there is one perk: Connecticut caps the taxable value of classic cars at $500.

That translates into a tax break for collectors with more expensive automobiles. It also changes the potential tax base for cities and towns, which collect taxes on automobiles. However, the total amount is relatively small, said Mary Gardner, assessor in Groton.

There are 785 vehicles with classic plates in Groton. Gardner estimated their owners collectively save in the range of tens of thousands of dollars in taxes. By contrast, Groton collects close to $100 million in annual tax revenue, she said.

Among some longtime car enthusiasts, opinions are mixed about which vehicles should qualify.

Rick Stevenson, a 69-year-old Air Force veteran from Colchester, said he admires the flair car makers brought to designing vehicles in the 1960s.

At a meeting last year of the No Rules Corvette Club in Rocky Hill, Stevenson was seated beside one of five vintage cars in his collection, a 1967 Corvette with side pipes and a tri-power carburetor system. Stevenson received the car as a gift from a close friend and fellow car collector, Frank Semkow, who left it to him before he died in 2013.

Stevenson said he owns two street rods and three Corvettes, which have been a favorite since he was a kid.

“Some of the cars that are running around now with classic plates on them, to me, I said you’ve taken the meaning of classic plates away now,” Stevenson said. “They should up that 20 years [for classic vehicle license plate eligibility] to 30 years.”

Others said it comes down to a simple principle: What was cool when you were growing up?

For 70-year-old Dave Vallas, the Corvette was the quintessential American sports car. Vallas, a retiree from Branford, and his wife, Deborah, purchased their first Corvette last year, after thinking about it for decades.

“I always just thought they were a beautiful car,” Dave Vallas said.