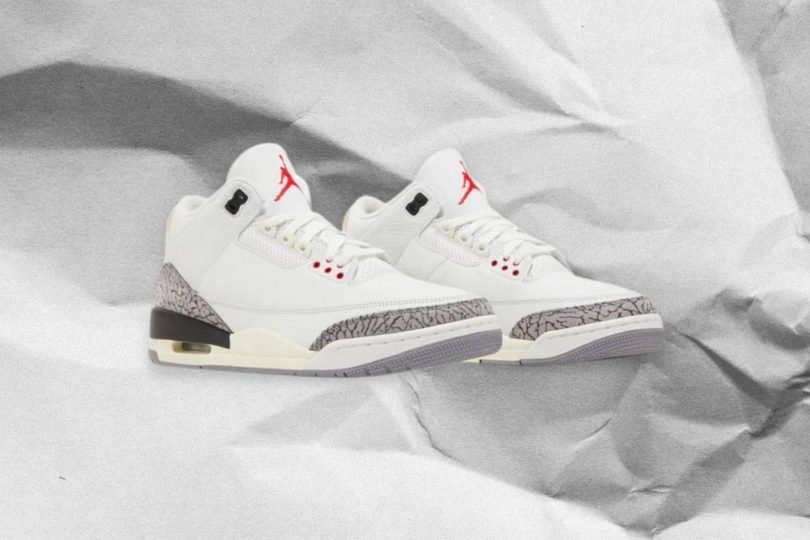 The NBA icon’s shoe company is gearing up for the highly anticipated Air Jordan 3 “White Cement Reimagined” shoes. The retro-inspired colorway is wrapped in an eponymous white ensemble with red accents all over.

The new “White Cement Reimagined” iteration of the classic Air Jordan 3 model is all set to make its debut on March 11, 2023. These footwear pieces will be dropped in a full-family size run. While the adult and grade school variants will be available for $210 and $160, respectively, the preschool and toddler sizes will be offered for $90 and $75 per pair.

Jordan Brand admirers and other sneaker enthusiasts will be able to buy them online as well as offline, through the Nike SNKRS app and other Jordan Brand retail shops.

Undoubtedly, one of the greatest and most well-known Air Jordan silhouettes ever is the AJ 3. It was the first pair of Michael Jordan sneakers created by the great Tinker Hatfield, and was first made available in 1988. The Air Jordan 3 is a cult favorite among sneakerheads as well as non-sneakerheads alike thanks to its exposed “Air” unit, simple appearance, and elephant pattern details.

The series will come to a close in August 2023, when the original “Fire Red” colorway launches with “Nike Air” branding for the first time. By then, all four original AJ 3 colorways will have endured at least one recent retro drop with the vintage marking.

The Air Jordan 3 Retro 88 was introduced in 2013. Since the release of the “Black Cement” model in 2001, the “Nike Air” insignia has not been seen on this particular model until then. Resale is extremely rare and in high demand now.

In 2018, Jordan Brand gave us not one but two variations of the iconic “White Cement” colorblocking with the “Nike Air” logo design. The first of these was the Justin Timberlake “JTH” Super Bowl adaptation, which featured the shoe in the original prototype style with the Nike Swoosh on the sides.

The “Free Throw Line” variant was released a month later, paying tribute to the 1988 Slam Dunk Contest with an icy blue transparent outer sole unit. Jordan Brand is preparing to bring back an all-time favorite for a much-needed comeback as the Air Jordan 3 hits its 35th anniversary in 2023.

The Air Jordan 3 “White Cement Reimagined” will feature a style based on the original 1988 release and exhibit a timeless combination of “Summit White/Fire Red/Cement Gray” elephant pattern toppings that are placed at the toe as well as heel areas of top quality white leather uppers with perforated portions.

The new AJ 3 “White Cement Reimagined” edition will be available from March 2023 onward. One can also register on the Swoosh’s e-commerce stores or get the SNKRS app for quick updates on the shoe.