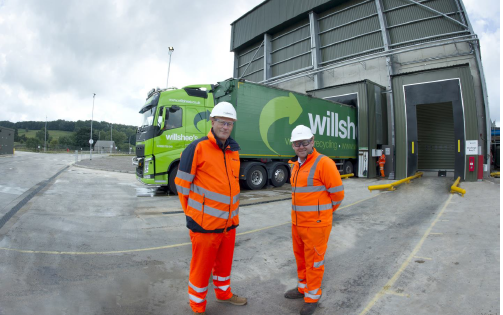 Lafarge is part of the Holcim Group and has invested in an alternative fuel platform, operated by its waste division Geocycle.

Willshee’s will supply an estimated 15,000 tonnes a year of solid recovered fuel (SRF) from its MRF in Swadlincote and transported by Willshee’s vehicles.

The cement kiln recovers thermal energy from the SRF to power the manufacturing process, while recycling any mineral content within the SRF into the final product. The kiln’s output is used in the construction sector.

Wilshee’s said it has seen a large increase in demand for SRF as businesses purpose circular economy goals.

Commercial manager Simon Lowe (pictured left with Geocycle’s head Andrew Whyatt) said: “Having worked very closely with Geocycle to get this project up and running, and to meet its very high standards of specification, it is exciting to see this contract now live.

“We can now see the real benefits of our investment in the Swadlincote facility, both in terms of our capacity to deliver a sustainable fuel for a global organisation like Geocycle as well as in terms of the scope for future expansion.”

Whyatt said that Wilshees’ close proximity to Geocycle’s plant “not only reduces the carbon footprint of the fuel that is manufactured at their advanced sorting facility in Swadlincote, but also provides us with excellent levels of service from their dedicated vehicle fleet”.