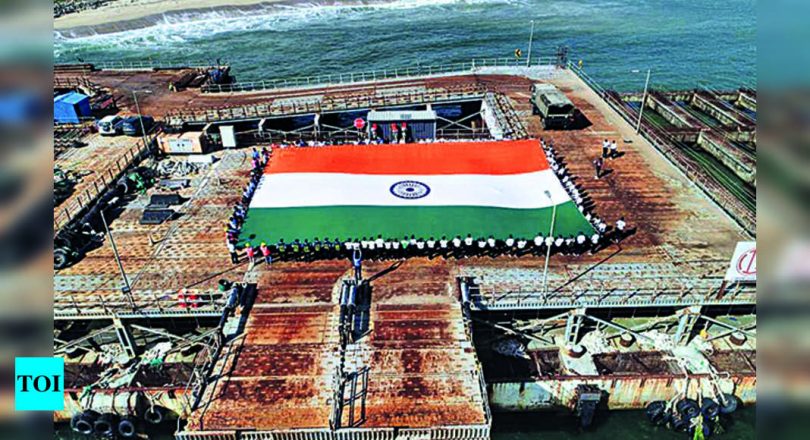 Thiruvananthapuram: As part of the Azadi Ka Amrit Mahotsav celebrations, the Adani Vizhinjam Port Pvt Ltd had hosted the Indian Army team of 75 personnel from the 91 Infantry Division of Pangode Military Station enroute their Tiranga Yatra from Kanyakumari to Trivandrum on Friday.
The team, each carrying a Tiranga, were received at the main gate complex by the Adani security team, employees and workers. The joint delegation then marched from the main gate complex till the port operations building where the team leaders were felicitated by Ethirajan, PD HOWE, and Lt Cdr Rohit S Nair (retd), head security.
A massive Tiranga of 75ft x 50ft was unfurled on the load-out jetty at the port construction site by the personnel of Indian Army Pangode Military Station and Adani Vizhinjam Port Pvt Ltd.
Meanwhile, as part of the 75th Independence Day celebrations, Pangode Military Station conducted various events at Colachel Stadium, Pangode, on Sunday. Governor Arif Mohammed Khan was the chief guest of the event. Speaking on the occasion, he said the Indian Army has lived up to its tradition of valour, heroism, sacrifice and fortitude. The governor flagged in the Tiranga Yatra, which was flagged off at Kanyakumari on Aug 11. As part of Amrit Mahotsav, Pangode Colachel Stadium witnessed the creation of two insignia – Azadi Ka Amrit Mahotsav insignia and Indian Army insignia in 10 minutes, in which 1,750 soldiers, schoolchildren and NCC cadets participated.