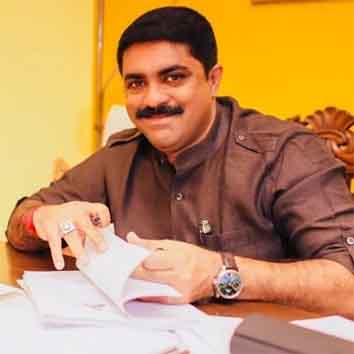 Panaji, Aug 14:  Goa Forward Party President and MLA Vijai Sardesai has alleged that BJP in Goa is ‘manufacturing majority’ and hijacking mandate, and has questioned whether they can erase the fact that 67 per cent people had voted against them in the assembly election.

Reacting to the claim of Chief Minister Pramod Sawant that BJP has won more than 150 Panchayats in the state, Sardesai said that they are lifting panch members and making them stand for photos to show the majority.

“There is competition going on between Pramod Sawant and (Health Minister) Vishwajit Rane to show how many seats have been won by them in their respective constituencies. Has the Chief Minister become popular in just the last three months? Who had won with few votes. How did all his panchs win? People stay with power for development, but this doesn’t mean it is a yardstick of your popularity,” he said.

“If tomorrow election takes place, then everyone will know (the fact). It is a fact, that only 33 per cent people had voted BJP, and the rest 67 per cent were against them. Can he erase it? Can he?,” Sardesai questioned.

“They are lifting panchs, now they try to lift Congress MLAs. They were forcing them to betray voters on the same day they got elected. This is not democracy. It is hijacking of mandate,” Sardesai said. (IANS)