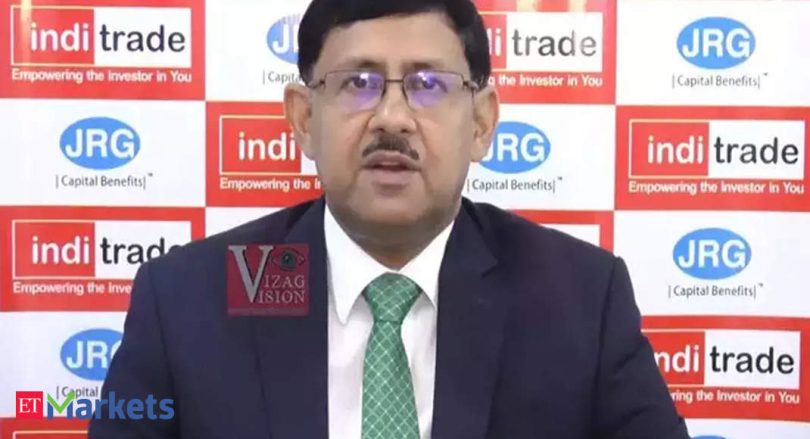 “If somebody has to take a bet on new age tech stocks, I would say go and buy Delhivery, go and buy some such businesses which have a real leg on ground. They are very clear about their business models. There are no wishy-washy statements regarding business models,” says Sudip Bandyopadhyay, Group Chairman, Inditrade Capital.

It has been a good patch, 15% up from the recent low. Do you think this is as good as it gets?
To an extent, I agree with this view that it is as good as it gets. There were a lot of apprehensions regarding US inflation numbers and when the numbers came much below what was being projected, the market cheered. The expectation generally is that the US Fed will be less hawkish and similarly, other central banks also will be less hawkish.

Of course, there is a risk-on move back in the market that is leading to FIIs buying in India in a big way. Also when we are speaking to fund managers abroad, we are finding that people are moving away from allocations in China and probably part of that allocation will come to India. Now the question is the valuation of India. Are the Indian companies really worth buying at current valuations?

But having said that, to an extent this euphoria probably is not going to be continuing. The US Fed and some of the Fed members’ statements are very clear. They still believe that the US benchmark rates need to move around 4% and if that has to happen, the US Fed will continue hiking for some more time and everybody is of that opinion as far as the Fed members are concerned.

Even the dovish members are talking about that. So when that reality hits the market, probably there will be some amount of course correction, some amount of profit taking, exits and all, but by and large, if the question is whether Indian markets will crash and come back to that 15% lower levels from current levels, I do not think that will be the case. Markets will be volatile for some time and may correct a bit. But the trajectory will be upwards in the medium to long term.

What should one do if they have missed the 15% up move in the market?
Well, FOMO (Fear of Missing Out) is always a dangerous feeling and I think people should avoid it. But the reality is that no bus has been missed. If somebody is an investor and has a one-year plus time horizon in mind, you know what bus has been missed. India will see a lot of growth. Look at BFSI, look at construction, look at infrastructure, real estate. We strongly believe that there is the significant growth in all these sectors and significant upward movement in the stocks and at least the leaders in these sectors.

So whether you take SBI,

, L&T or an or , , Oberoi in in the real estate pack, we strongly believe even if you are acquiring at current levels, all the leaders cannot do anything wrong unless you are a person who is looking at one month or two month horizon. Have a one-year horizon and buy these stocks even at current levels. There’s absolutely no problem.

I am curious about your take on new age tech. A lot of these companies like say are talking about how they will be guaranteed survivors and be it with time, with an understanding of what exactly is needed from the financial standpoint, will emerge triumphant in the end. What is your view on not just Zomato but some of the other new age stocks as well?
I have no questions or doubt in my mind that they will survive. They have raised a lot of money, they have strong investors behind them but that was never the question. The question was the valuation. Based on the current business activities, I think that question still remains.

I listened to the promoters and the management recently as well. There is no clear road to profitability yet as far as

is concerned. Zomato recently did an acquisition at an elevated valuations and that is one business which there are a lot of question marks the world over on instant delivery. So I am definitely not going to recommend somebody to buy Zomato. Yes, it will be a survivor but at what levels one does not know.

But there are other companies which are different. Delhivery, for example, is not like Zomato or Paytm. Logistics is a 1,000-year-old business. Now what Delhivery is trying to do is to bring a lot of technology and efficiency in logistics. That is one business which already has raced ahead of most of the logistic players if not leaders in most of the spaces they are operating in.

Yes, the price levels at some point of time may be elevated, but the reality is this is a strong business model which is very well grounded and they will start making money sooner than later. If somebody has to take a bet, I would say go and buy Delhivery, go and buy some such businesses which have a real leg on ground. They are very clear about their business models. There are no wishy-washy statements regarding business models.

What about IT? Is it something that you would remain circumspect on or stick to just the bellwethers within the space?
I am not circumspect, but short to medium term, there are definite headwinds with Europe getting into definite recession; US may or may not go into recession, but there can be some demand destruction for some time. When this kind of thing happens, it is always better to stick to the leaders and that is what I believe.

Amongst the leaders, I believe one can look at

because on a peer comparison, it is really available at attractive valuations. The platforms and product business had challenges but ITES is growing and the margins in ITES have been industry beating. I am reasonably confident in HCL Tech in the long term. All the frontline IT should continue to do well. The pace of growth may slow down a bit but yes, they will have growth.

HCL Tech has one of the highest exposures to Europe. They have one company which has the IMS business which has the lowest margin in the industry. They may have high growth but growth will get compromised because of Europe and margins in IMS are not likely to move higher. Isn’t one better off buying a higher margin franchise like ?
That is the point that I am trying to make. When there is a major challenge in economies which is not necessarily a labour surplus market, people look at more and more technology to kind of get work done at a lower cost. So I am betting on exactly the same logic that because they are in Europe, because there are challenges in European markets, they will continue to win and gain more and more share.

The products and platform business had been under pressure and I am just making that statement that that business is becoming to an extent less relevant in overall HCL Tech context. That is exactly what my hypothesis is.