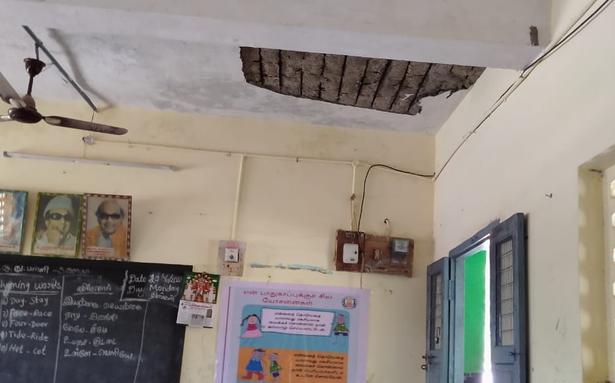 A Class IV student of a panchayat union elementary school at S. Kalabam village near Karambakudi in Pudukottai district was injured after cement plaster from a portion of the roof of a classroom fell over him on Monday.

The classes were being conducted outside the classroom on the school premises when the boy, Bharath, had gone inside the classroom to pick up a pen. The plaster from the roof collapsed all of a sudden and a piece fell over the boy’s head causing injury to the minor.

School teachers rushed in and provided first aid to him and subsequently informed his parents, said police sources. The boy was thereafter taken to Alangudi Government Hospital for treatment.  As a precautionary measure, the boy was later taken by his parents to the Pudukottai Government Medical College Hospital.

The school functioning with three buildings has a strength of 38 students, including 10 girls.