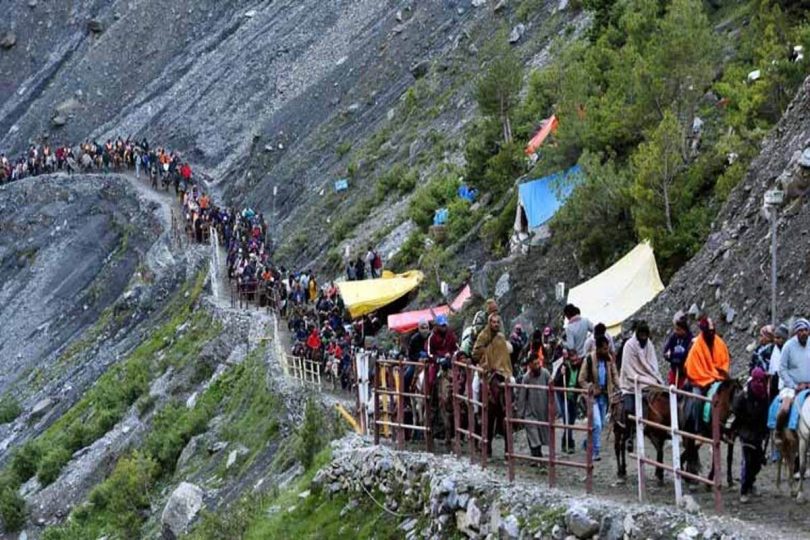 The Union government has put in motion its plan to construct an all-weather, 22-km road between Chandanwadi and Sangam Top, including a 11-kilometer Sheshnag Tunnel under the Ganesh top, to ease the journey of Amarnath pilgrims.

Additionally, this new road will allow commuters going from Jammu towards Ladakh to by-pass Srinagar town.

The consultant will prepare Detailed Project Report (DPR), Pre-construction activity and supervise the project during construction as well as maintenance period.

According to the bid documents also, the consultant will be given 10 months for the preparation of Detailed Project Report and pre-construction activity will take about another two months. A period of 60 months – five years- has been earmarked for the construction of the road.

The 22.3-km-long Chandanwadi- Sangam Top greenfield highway lies on Khanabal-Baltal section of NH-501 in Jammu & Kashmir. The new stretch will connect the South and North yatra routes via the highway tunnel.

Amarnath cave shrine in South Kashmir is considered to be one of the major Hindu Dhams and is the abode of Lord Shiva.

Inside the main Amarnath Cave is found the Amarnath Ice Lingam of Lord Shiva.  This naturally formed Ice Linga grows in size during the months of May through August. During this time, pious people come from around the world for the annual pilgrimage and festival of the Amarnath Linga. The Amarnath Lingam is said to grow and shrink with the phases of the moon, reaching its height during the summer festival.

Situated in a narrow gorge at the farther end of Lidder Valley, Amarnath Shrine stands at 3,888 metres above sea level, and can be reached only on foot or by pony.

There are two routes by which pilgrims can visit the holy site – through Pahalgam in South Kashmir’s Anantnag and Baltal in Central Kashmir’s Ganderbal district.

The Baltal route is 14-km trek from Baltal to the shrine along a steep, winding mountain trail and can be covered in a day. Most people take the Baltal route because of its shorter distance.