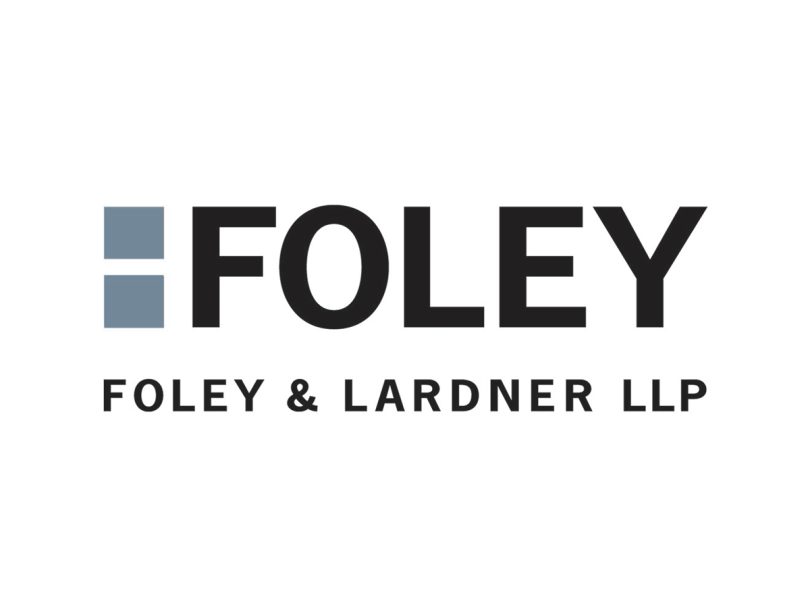 Design patents for component parts are an appealing option for many automotive manufacturers.  A design patent is a form of intellectual property right that protects “any new, original and ornamental design for an article of manufacture.”  Whereas utility patents are intended to protect the structure and/or functionality of “any new and useful process, machine, manufacture, or composition of matter, or any new and useful improvement thereof,” design patents are only intended to protect the ornamental aspects of an article of manufacture.  In fact, a design that is “primarily functional” in nature is excluded from design patent protection.  Given the complexity of automotive vehicles, design patents may cover a variety of component parts, such as the ornamental look of hoods, fenders, side mirrors, headlights, taillights, and so on.  Recent efforts have sought to reduce design patent protection over these component parts with the purposes of expanding consumer choice, making repair and/or replacement of these parts less costly for drivers and insurers, and enhancing competition in the automobile repair parts market.

In the 2019 Federal Circuit case, Auto. Body Parts Ass’n v. Ford Glob. Techs., LLC, the Automotive Body Parts Association (ABPA) asked the court to hold that design patents protecting the hood and headlamps of certain Ford F-150 models were invalid or unenforceable.  First, ABPA alleged that these design patents were invalid because they were “primarily functional.”  Borrowing from the concept of “aesthetic functionality” in trademark law, which may preclude trademark protection for design features that make a product more aesthetically pleasing rather than identifying its source, ABPA argued that restoring the original appearance of a damaged vehicle made the design feature (e.g., hood) primarily functional (there is functionality in making the aesthetic of the component part match the remainder of the vehicle).  Second, ABPA argued that Ford’s patent rights were exhausted when the vehicles were initially purchased, and that customers have a right to repair their purchased goods.  In patent law, the exhaustion or first sale doctrine refers to a situation where an authorized sale “exhausts” the patent holder’s right to control further sale and use of that item. In other words, ABPA’s argument was that by selling the F-150 truck, any of Ford’s design patent rights embodied in that truck were exhausted.  The court rejected both of these arguments, thereby reinforcing the viability, validity, and enforceability of design patents on component automotive parts.

While the Federal Circuit validated the value of automotive component part design patents, a bipartisan group led by Congressman Darrel Issa (R. CA) reintroduced a bill in 2021, originally introduced in 2013, that would limit the enforceability of design patents for certain automotive component parts.  House Bill 3664, titled the Save Money on Auto Repair Transportation Act or “SMART Act,” would exclude from infringement the (a) making, importing, or offering for sale of any part intended to restore a motor vehicle to its originally manufactured appearance and the (b) using or selling of those parts more than thirty months after any such part was offered for sale as part of a motor vehicle.  Thus, design-patented component parts could be sold by aftermarket suppliers as soon as thirty months after a vehicle including the component part is offered for sale.  The SMART Act applies only to exterior component parts, “such as a hood, fender, tail light, side mirror, or quarter panel” and “does not include an inflatable restraint system or other component part located in the interior of a motor vehicle.” As of December 6, 2022, there has not been any notable activity with respect to the SMART Act.

The efforts from the ABPA and Congressman Issa to limit design patent protection for automotive component parts are part of a broader “right to repair” movement, which seeks to allow consumers and service providers unaffiliated with the original equipment manufacturer (OEM) to repair purchased goods.

In sum and with reference to the following chart, the data shows that the number of granted U.S. automotive component part design patents steadily increased from 2013 to 2019.  While the number of design patents trended slightly downward in 2020 and 2021, the raw numbers still exceed any year prior to 2019 – it is likely too early to determine if this trend will continue.

One potential reason for this increase is the rise of electric vehicles (EV), which has yielded new OEMs. To investigate this hypothesis, we filtered the compiled dataset to focus on EV OEMs.  The following chart shows the number of automotive component part design patents by year issued to a subset of top EV manufacturers. 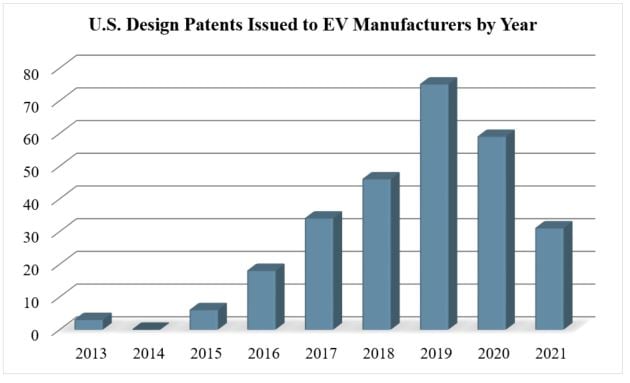 Generally speaking, EV manufacturers also steadily increased their U.S. design patent filings through 2019 and, as such, have not noticeably been deterred by the right to repair movement.  The recent downward trend in granted EV design patents matches that of the overall industry discussed above.  Again, it may be too soon to tell if this trend will continue, especially given the higher statistical variance due to the small number of manufacturers and vehicle models in this category.