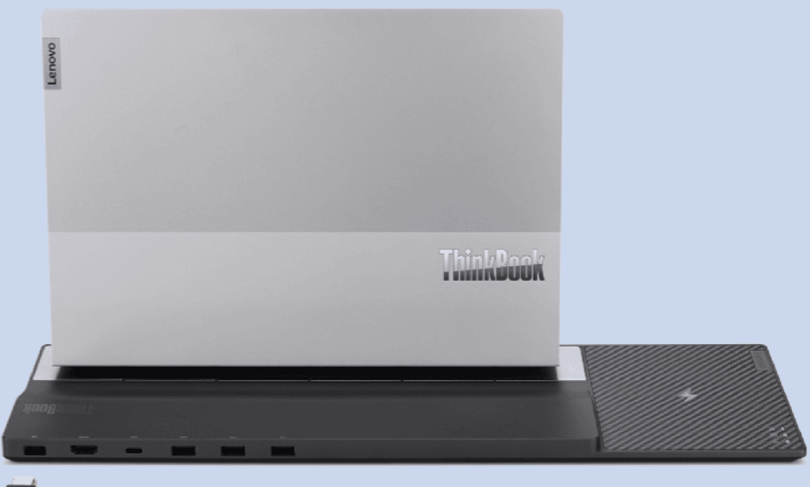 With the Lenovo ThinkBook Wireless Dock, the manufacturer presented an exciting docking station for the compact Thinkbook 13x Gen 2 at CES 2023. Not only can the notebook be charged wirelessly, but the ports can also be used wirelessly and directly on the dock.

With the Lenovo ThinkBook Wireless Dock, the manufacturer once again proves a knack for innovative ideas. Because what is actually a rather boring docking station for the compact Thinkbook 13x Gen 2 notebook – which, as an ultrabook, naturally lacks ports – becomes a real stroke of genius thanks to clever ideas.

The notebook is simply placed vertically on the docking station. Thereupon, all ports on the notebook can remain free. The connection to a display is wireless via HDMI or USB-C including DisplayPort, the notebook is charged with 45 watts without cables, and all peripherals can be used wirelessly with the Thinkbook. Even a wireless charging pad for smartphones is available, albeit only with a charging speed of 10 watts.

The data transfer from dock to notebook is done via Wi-Fi 6 or Wi-Fi 6E. This naturally opens up many practical possibilities. For example, to quickly switch from the desk to the sofa to work or similar. It is also conceivable that the manufacturer will also offer the Lenovo ThinkBook Wireless Dock for other notebooks in the future.

The Thinkbook 13x Gen 2, which is also required, will be launched first and should be ready for delivery within two to three weeks according to the manufacturer’s website. It is optionally equipped with an Intel Core i5-1235U processor or the Core i7-1255U, 8 GB or 16 GB LPDDR5 RAM with 4,800 MHz and a 512 GB SSD.

The battery of the compact 13.3-inch notebook, whose display has a resolution of 2,560 x 1,600 pixels, has a capacity of 65 watt hours and is normally charged via USB Type-C. As a compact ultrabook, the selection of ports is naturally limited: Only two USB-C ports with Thunderbolt 4 and a 3.5 mm jack are offered. How good that the Lenovo ThinkBook Wireless Dock expands the connectivity considerably.

The Lenovo ThinkBook Wireless Dock is expected to make its way to retailers in June 2023. The manufacturer has not yet named any prices. The ThinkBook 13x Gen 2 on the other hand starts at 1,649.00 Euros.