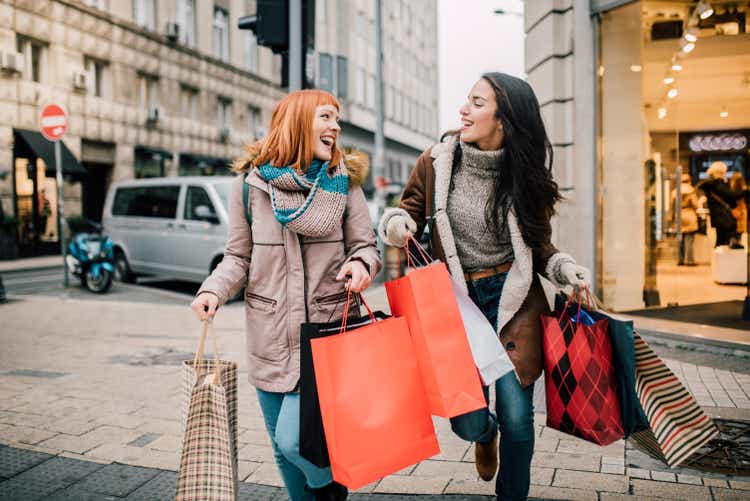 Retail earnings results in the past week have been scattershot, clouding investor expectations for the busy holiday-shortened week for apparel retailers.

A slate of earnings from retail titans including Walmart (WMT), Target (TGT), The Gap (GPS), Kohl’s (KSS), Ross Stores (ROST), Macy’s (M), TJX Companies (TJX), and Foot Locker (FL) issued in the past week offered a mixed picture of the overall retail sector (XRT). Aside from a cooler than expected PPI report and a hotter than expected retail sales print in the past week, a few key factors in execution and expectations were the key factors in portending either poor or positive post-earnings performance.

However, the level of inventory is not evenly distributed.

For example, Walmart (WMT) saw inventory rise 13% from the prior year quarter, indicating improvement in the quarter after its August report indicated management would take significant measures to cut down on the metric. By contrast, Target’s (TGT) inventory remained bloated despite CEO Brian Cornell’s highlighting of “decisive action in the second quarter to right-size” ordering. Further, holiday sales events kickstarted earlier than ever were not able to cut the metric.

“We owned $17.1B of inventory at the end of the third quarter, which is $5.7B higher than the end of Q3 2019. In percentage terms, this year’s number represents an approximate 50% increase from three years ago, a deceleration from three-year growth of 68% as of the end of the second quarter,” Cornell told analysts last week.

Gross margins for the first 9 months of 2022 came in 550 basis points for the retailer amid the actions, adding concern as Cornell warned of slower holiday sales from prior years.

Similar inventory level dichotomy was visible for Ross Stores (ROST) and TJX Companies (TJX) in the two companies’ respective earnings reports. Total inventories for TJX rose to $8.3B by the close of October 2022, as compared with $6.6B at the end of the third quarter of fiscal 2022. By contrast, a modest jump to $2.49B from a prior $2.23B was recorded by Ross Stores.

Finally, Macy’s (M) was able to mark a significant post-earnings pop after reporting strong inventory management, rising only 4% from 2021, that should buoy the company against markdown pressures. As such, the New York-based retailer was able to raise its full-year forecasts.

“We know the consumer is under increasing pressure and has choices on where to spend,” CEO Jeff Gennette commented. “As a leading gifting destination with fresh inventory across the value spectrum, we are ready to meet our customers’ needs this holiday season.”

Yet, not every retailer seeing their stock rise after earnings as of late was a model of execution.

Certainly Kohl’s (KSS) did not navigate supply chain issues quite as effectively as its peers, rising 33% from the prior year quarter. Additionally, a CEO transition clouds the path ahead as far as execution, adding uncertainty as the company pulled its Q4 guidance altogether. Nonetheless, shares rose sharply on the day of the print.

Similarly, the story remained somewhat uncertain for The Gap (GPS) which continues to grapple with fallout from its terminated Kanye West relationship and slowing sales. While its inventory management was indeed strong, rising only 12% from 2021, it was more so the depressed consensus estimates that helped lift the stock. Indeed, for both Kohl’s and The Gap, Q3 reports appeared to be readily applauded by a market that expected little from each company.

For example, Gap’s comparable sales rose just 1%. However, against a 3.44% decline expected by analysts, that figure represented a blowout of expectations. A flat report for comparable sales from the Athleta brand cruised past the expectation of a 5.59% drop as well.

Baird analyst Mark Altschwager noted that while the report exceeded some expectations, which were reeled in significantly prior to the print, the earnings failed to impress in absolute terms. For Kohl’s (KSS), the overwhelmingly poor sentiment on the stock was seen as a driver of investors seeing some potential opportunity in the name ahead of the executive transition, in Altschwager’s view.

“The sales/margin/earnings recovery picture remains very cloudy,” he said. “We’re holding our $0.75 EPS estimate for F2023 and we see a path to better over time, but near $14, we have a hard time making a compelling valuation argument for shares near-term.”

Finally, Foot Locker (FL) posted a surprising Q3 earnings beat and raise after far more bearish reports from apparel manufacturing partners Adidas (OTCQX:ADDYY) and Nike (NKE) in the week’s prior to its earnings release. This strong guidance took some sting out of a similarly elevated inventory position, about 29.5% higher than the prior year quarter. The execution under new CEO Mary Dillon amid the lowered expectations sent shares nearly 20% higher after the earnings print.

Beginning on Monday after the close, a full docket of apparel retail earnings are due in during the short week.

Urban Outfitters (NASDAQ:URBN), Nordstrom (JWN), Abercrombie & Fitch (NYSE:ANF), and American Eagle Outfitters (NYSE:AEO) are all set to offer anticipated reports, while Burlington Stores (NYSE:BURL) will post results in an attempt to follow the performance of key peers TJX and Ross Stores in the week prior. In each case, the inventory, execution, and expectation issues are likely to loom large.

For Urban Outfitters (URBN), inventory surged 44.4% higher in the second quarter from the prior year, raising markdown risk. As such, control of this metric and a sign that the company has been able to work through existing inventories will be pivotal for its report on Monday evening. Similar rises in inventory levels were recorded by both American Eagle Outfitters (AEO) and Abercrombie & Fitch (ANF) in Q2, increasing scrutiny into Q3 reports due on Tuesday.

“The company continues to make progress adjusting inventories lower to be in line with demand trends,” American Eagle management said in its Q2 report. “Third quarter ending inventory is projected to be up in the mid-single digits with fourth quarter inventory expected to be down year-on-year.”

It is worth noting that EPS and revenue expectations for all three apparel retailers have been revised downward numerous times in the 90 days ahead of the expected reports as well.

Finally, Burlington Stores (BURL) saw inventory levels mark the largest year over year increase by quite some margin in both the first and second quarter. In Q2, merchandise inventories jumped to $1.27B from $828M in Q2 2021, a 53% rise.

“A massive overhang of inventory across the retail industry has driven a huge surge in promotional activity at other retailers,” CEO Michael O’Sullivan explained in commentary following the Q2 result. “We believe that the external factors – economic pressure on lower-to-moderate income shoppers, and very high levels of promotional activity – will continue well into the second half of the year.”

Earnings estimates have been cut most significantly for Burlington amid this expected promotional activity, with EPS expectations being trimmed 20 times in the past 90 days. Still, aided by strong reports within its sector, shares will have marked about a 25% gain in the month ahead of its pre-market report on Tuesday.

Read more on the short week’s slate of earnings reports.