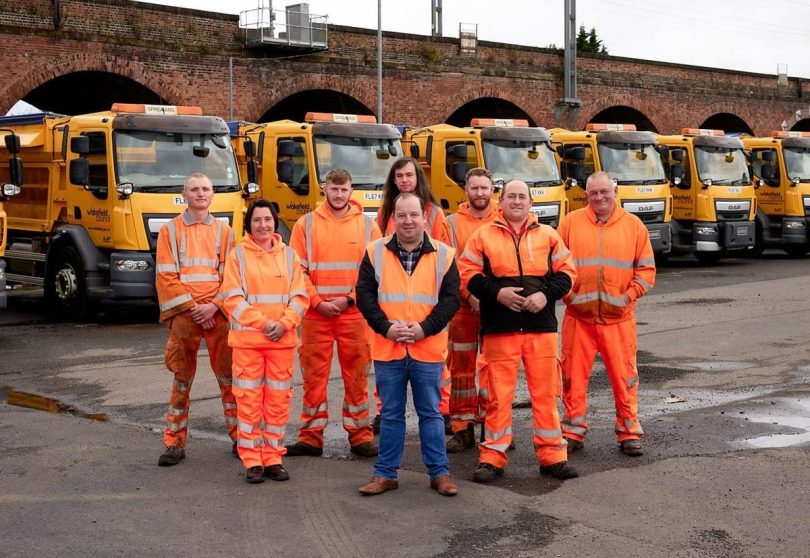 Coun Matthew Morley with some of The Grit Team.

The team of men and women from across the council will be providing a 24-hour service, seven days a week.

Between them, the crew will drive 14 state-of-the-art gritters to cover over 930km of ‘‘priority routes’ which are used by more than 90 per cent of all the traffic in the district. This is classed as a precautionary grit run and is made up of 12 routes.

The Grit Team’s priorities are all A and B roads and steep main roads to villages, housing or industrial estates, main hospitals and large schools.

They’ll be working with the emergency services to keep them moving as well as restocking the 380 grit bins across the district. In severe weather, they’ll be helping out on minor estate roads making sure that bin collections can keep running.

Wakefield Council has over 4,700 tonnes of grit held in a special storage area, that keeps it dry and allows the huge gritters to restock as quickly as possible.

Coun Matthew Morley, Cabinet Member for Planning and Highways at Wakefield Council, said: “The out of hours gritting team come from right across the council. We’ve got people from emergency planning, transport services, Street Scene, engineers, and procurement officers, as well as from highways.

“Some of them have seen some really severe winter conditions over the years and have missed family celebrations and other important anniversaries to help keep the roads clear and moving.

“The majority of the time they are working in the early hours of the morning or late at night, so they often go unseen.

“I hope residents will get to know them a bit more this winter by following us on Facebook where we’ll be introducing them throughout the season.”

Residents are also being asked to volunteer as Snow Wardens, to help keep pavements and areas around their homes clear of snow and ice. Snow Wardens join forces to help their neighbours and more vulnerable citizens who can’t help themselves by clearing pavements, drives and local streets whilst the council focuses on its priority routes.