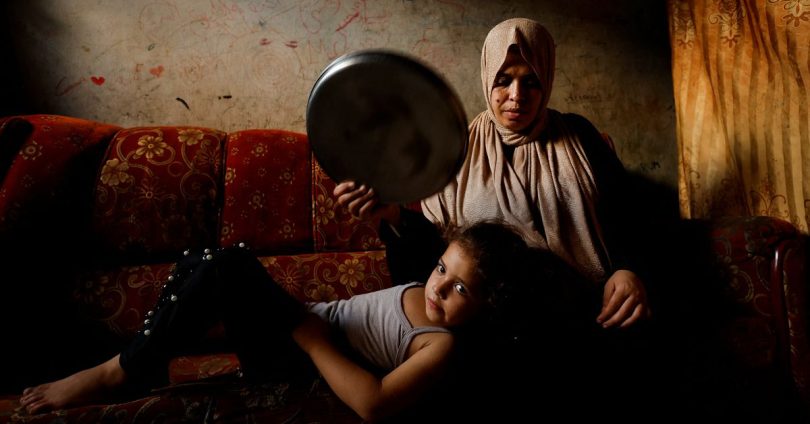 GAZA, Aug 2(Reuters) – For Palestinians living on the crowded Gaza Strip, a searing summer heatwave has been made worse by power cuts that leave them without electricity for as much as 10 hours a day.

“The fan is broken, the battery is not working and we are fanning ourselves with trays,” said Alaa Zidan as she sat with her husband in their home in the southern zone of Khan Younis, a rusted electric fan hanging motionless from the ceiling.

“We can’t eat or sleep because of the heat,” she said.

More than 2.3 million people are packed into the narrow strip of land squeezed between Egypt and Israel, an area that would normally require around 500 megawatts of power per day in summer, according to local officials. It receives 120 megawatts from Israel while the enclave’s lone power plant supplies another 60 megawatts.

Mohammad Thabit, of Gaza’s power distribution company, said in April, with moderate weather, they could supply 20 hours of electricity per day, but the capacity of the power generating plant has been impacted by greater demand due to high temperatures and soaring energy prices.

“We are currently unable to feed more than 10 hours of electricity per day to people and public institutions, which would have a direct impact on all aspects of life in Gaza,” Thabit told Reuters.

Money for the fuel to operate the power plant comes from Qatar, which pays $10 million to purchase it from Israel, but rising fuel prices have left the local company with a shortfall of some $3 million.

Power shortages have continued to generate discontent with the ruling Islamist group Hamas, which has run the territory since 2007 and which blames a 15-year-long Israeli blockade for devastating Gaza’s economy.

Some Gaza homes and businesses rely on generators to overcome the lengthy power cuts. Those that cannot afford expensive generators use humble battery-powered led lights.

Tareq Al-Saqqa, General Manager of Al-Saqqa Home Appliances, said that while summer heat made cooling devices more necessary, tough economic conditions made people “prefer to adopt to cheaper alternatives” or fix what they already have at home.

In the sweltering heat, some people visit swimming pools where a ticket can cost around $2, while richer Gaza families rent private swimming pools, an entertainment that may cost 300 to 1,000 shekels ($86 to $289) per day.

Others, less well off, have to find cheaper alternatives.

Zaki Abu Mansour, 60, and his 10-member family fled the heat at home to sit on the beach, the only free-of-charge entertainment for most Gazans.

“People in the world, for example in Saudi Arabia, they have their streets and their homes air-conditioned,” he said. “Here it is boiling, the ground is boiling and houses are boiling.”