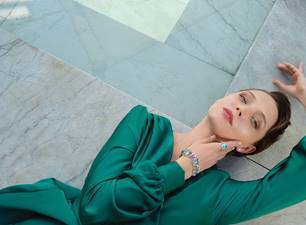 The latest pieces from Gübelin Jewellery combine paraiba tourmalines with additional brightly coloured gems to radiate pure joy. The design of the Grace of the Sea Anemone line is inspired by the inner world of the paraiba tourmaline.

Grace of the Sea Anemone

Paraiba tourmalines come in a range of colours that bring to mind images of turquoise-blue waters and greenish-blue Swiss Alpine lakes. In addition to their external beauty and aquatic colours, paraiba tourmalines are fascinating for their inner world. As the gemstones are created deep within the earth, they form internal shapes and structures which are as unique as any fingerprint. These lend each gemstone its own personality, revealing aspects of its history and providing valuable information about how it arose. The inner world of a paraiba tourmaline inspired Gübelin Jewellery to create Grace of the Sea Anemone. Within the sinuous, organic shapes designers envisioned an elegant sea anemone, its delicate tentacles gently undulating in the currents.

Coloured gems are growing in popularity and importance. They grant a piece of jewellery character and demonstrate individuality, personality and style.

Gübelin Jewellery is renowned for the highest expertise in coloured gems and has added new facets to expand its popular Grace of the Sea Anemone line. The most recent additions, the haute joaillerie creations with rare paraiba tourmalines and brilliant-cut diamonds, are available as colourful arrangements – set with radiant gems such as amethysts, tsavorites, yellow beryls, orange garnets as well as green and pink tourmalines. These jewellery pieces brilliantly reflect joy and lend colour to each and every day. The colour palette is reminiscent of the aquatic shades of lakes and seas, turquoise pools and colourful fruit cocktails, through which Grace of the Sea Anemone captures the colours and lightness of an endless summer.

Along with the colourful combinations, Gübelin Jewellery presents an additional design: The Grace of the Sea Anemone bangle. The curved bangle is the first of its kind, adding another variety of jewellery to the line. The organic design serves as a tribute to its source of inspiration while also offering the greatest comfort for the wearer. In the Swiss jewellerʼs in-house atelier, the bangle was created from white gold and gently wraps around the wrist. The overall result of the flowing design is elegant, dynamic and refined, displaying a range of colours. Radiating at the centre of the bangle is a cushion-shape paraiba tourmaline from Mozambique (3.52 ct, 83.4 Gübelin Points). Diamonds, accompanied by violet, pink and blue sapphires, contribute additional glittering highlights.

Just as every piece from Gübelin Jewellery, the bangle is also set with the iconic ruby. Placed prominently next to the paraiba tourmaline, the ruby identifies the bangle as a Gübelin Jewellery creation. With their great love for detail, the designers consistently succeed in finding the perfect position to give each piece of jewellery the ideal finishing touch. In the chandelier earrings, the rubies grace the removable elements which allow the pieces to be worn as elegant ear studs or more festively as chandelier earrings. For the cocktail ring, the designers chose the artistically decorated setting that secures the cabochon-cut paraiba tourmaline. The ruby serves as a glittering final flourish to the bracelet. Here, designers opted to use the clasp, a subtle and refined way to highlight the element that opens the bracelet.

Tourmalines are known for their wealth of colours, which glisten in all the hues of the rainbow. Paraiba tourmalines are especially sought-after and treasured. This coveted variety was first discovered in the 1980s in the Brazilian state of Paraíba. Almost immediately, the gem became an international shooting star. This is no wonder, as the beauty and splendid colours of this extraordinary gemstone are incomparable.

The lively and intense colours include radiant blue, green and turquoise, ranging from blue-green to greenish-blue. These spectacular colours are the result of the trace elements chromium and manganese. Only when these trace elements are present can the tourmalines be classified as paraiba. This chemical composition, which determines whether it is a paraiba tourmaline, should only be assessed by gemmological laboratories with a worldwide reputation such as the Gübelin Gem Lab. At the start of the 21st century, deposits were discovered in Nigeria and Mozambique.

The House of Gübelin’s Deeply Inspired philosophy pervades all aspects of the company’s activities. It is based on a unique combination of beauty, knowledge and expertise, always pursuing a deeper understanding of the profession, in tribute to the family’s pioneering spirit. To symbolise this philosophy, each piece of Gübelin Jewellery contains a ruby. It is considered the king of gemstones and stands for passion and love. The iconic hallmark of Gübelin Jewellery also stands for the Gübelin family’s passion for coloured gemstones.

Raphael Gübelin, President of the House of Gübelin in its sixth generation, explains: “The House of Gübelin is renowned for its expertise in coloured gems, which Gübelin Jewellery presents in its most elegant form. The combination of inspiration, innovation and expertise together with tradition, authenticity and science is unique within the industry.”