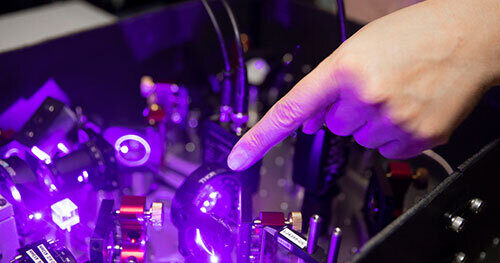 This effort provides significant funding for faculty-led research at Harvard and will build capacity for student recruitment, training, outreach and workforce development in this key emerging technology field. The initiative focuses on driving rapid progress toward specific research aims in quantum networking at the Harvard Quantum Initiative
(HQI).

“By working together, academia and industry can accelerate discovery and technological progress,” said Harvard Provost Alan M. Garber. “Through this alliance with AWS, we will bring scientific scholarship and education to bear on some of the most exciting frontiers in quantum science. Together we will advance the goals of the Harvard Quantum Initiative, an interfaculty initiative that exemplifies the rewards of collaboration across different scientific domains.”

“Quantum networking is an emerging space with promise to help tackle challenges of growing importance to our world, such as secure communication and powerful quantum computing clusters,” said Antia Lamas-Linares, quantum networking lead at AWS. “The collaborative initiative between AWS and Harvard will harness top research talent to explore quantum networking today and establish a framework to develop the quantum workforce of the future.”

Expanding the Potential for Quantum Impact

Through a three-year research alliance enabled by Harvard’s Office of Technology Development, AWS will support faculty-led and designed research projects at HQI in the areas of quantum memories, integrated photonics, and quantum materials. A portion of that funding will also allow an upgrade to the quantum fabrication capabilities of the NSF-supported Center for Nanoscale Systems at Harvard, a critically important facility for nanofabrication, materials characterization, soft lithography, and imaging, with locations in Cambridge and at the Science and Engineering Complex in Allston.

The overall goal of the research projects is to develop foundational methods and technologies for what eventually will become a quantum internet, where communication and information processing is performed according to the laws of quantum mechanics. As the world faces relentless threats to privacy and security, exploring possible quantum networking applications is an important area of focus. The behavior of information in a quantum network is expected to enable unprecedented security and anonymity. Yet, for those aspirations to be realized, physicists, engineers, and materials scientists must overcome challenges to store, manipulate, repeat, and transmit quantum information over long distances.

“Exploring this potential requires a deep understanding of the industry’s toughest scientific challenges that will lead to development of new hardware, software, and applications for quantum networks,” said Lamas-Linares.

“These projects build upon fundamental work that has been done at Harvard labs for well over a decade by several generations of students and postdocs who have pushed the frontier, starting from theory, to experimental physics, to device engineering, to materials development,” said Mikhail Lukin, the George Vasmer Leverett Professor of Physics and codirector of HQI.

In parallel with research efforts at Harvard, researchers at AWS will strive to advance the engineering maturity and scalability of quantum memory technology. Today’s news builds on Amazon’s June 2022 announcement around the AWS Center for Quantum Networking where AWS will focus on addressing scientific and engineering challenges with the goal to develop new hardware, software, and applications for quantum networks that connect and amplify the capabilities of individual quantum processors. The alliance will be led by Antia Lamas-Linares, who leads a team of AWS Quantum Research Scientists at the AWS Center for Quantum Networking.

“Innovation in advanced technology areas like quantum will require collaboration by academic labs, small industry, leading corporations, and likely also government labs,” Lukin added. “It is part of the HQI mission to enable these kinds of collaborations, and this alliance with AWS is a critical step in that direction.”

“In quantum, we have a unique opportunity because the research is still so much in the early stages of basic discovery, yet also at the threshold of commercial implementation,” said HQI codirector Evelyn Hu, the Tarr-Coyne Professor of Applied Physics and Electrical Engineering. “This is very unusual in science and technology. For students training in this field, especially, it’s important to get an appreciation of what science and engineering can do, but also what it needs to do to be scaled up, go to the outside world, and be relevant.”

In addition to the quantum research collaboration, supplementary philanthropic support from AWS will help Harvard train and support graduate students and postdoctoral researchers, especially with an aim to welcoming aspiring scientists and engineers from underrepresented backgrounds.

While industry reports estimate quantum technologies will create several hundred billion in value over the next decade, there are still not enough quantum experts to take on this work. This quantum technology workforce shortage was also noted in President Biden’s recent directives. The goal of the “AWS Generation Q Fund at the Harvard Quantum Initiative” is to begin to establish a diverse talent pipeline of highly qualified researchers to train the next generation of quantum scientists and engineers.

“AWS appreciates that HQI can play a profound and seminal role in helping build the future of the quantum workforce, making opportunities possible for the next generation of leaders and innovators,” said Hu, including by embracing the goals of the Graduate School of Arts and Science’s Research Scholar Initiative (RSI) and other programs that “provide exploratory bridges towards higher-degree programs,” Hu said. Such programs can provide mentored research and training, introduce students to quantum research, and provide funds for coursework and to attend and present at conferences. “These academic bridges are important in bringing in a wider group of people into the community.”

“There is a shortage of qualified quantum-educated workforce, and it’s not just physicists but engineers and even people involved in running these businesses,” added Lukin. We’re in a unique position to contribute,” he explained. “Essentially, all major quantum research centers in the U.S. and abroad have several faculty members and group leaders who have been educated at Harvard.”

These efforts build upon rising momentum. Harvard announced last year a new PhD program in Quantum Science and Engineering and is finalizing plans to comprehensively renovate an existing campus building into a new physical home for HQI, as well as a quantum hub, a project made possible by gifts from Stacey L. and David E. Goel ’93 and several other alumni.