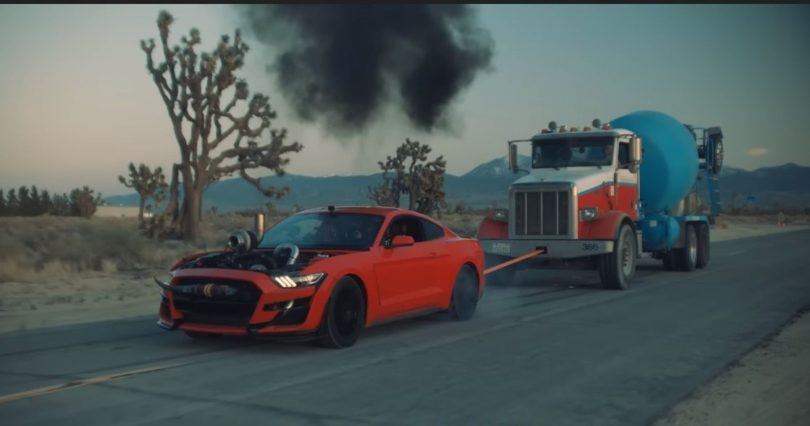 At first glance, Westen Champlin from his YouTube channel of the same name may seem a tad unconventional. Westen takes the best of the mechanical engineering world and throws a lot of North American awesomeness into the mix to make some of the most entertaining content online today. A prime example of his scientific studies includes the Ford Mustang with a 12 valve Cummins diesel swap, he’s aptly calling, the SmokeStang.

Not A Factory Option From Ford

As a Cummins diesel engine is, surprisingly enough, not a factory Ford option, Westen needs to do some tests with the SmokeStang. He’s had an invitation to a Californian movie set to see if his car can pull a 40,000 lb cement truck. Westen tells us he’s recently welded a hitch on the back of the Ford and since there aren’t any numbers around towing capacity with a Cummins swap, we can’t know without these important tests. What we can tell you is that a stock Mustang can only tow about, 1,000 lbs and comes highly un-recommended.

That said, Westen decides to start small and try towing a 20,000 lb full-sized “big yeller” school bus… for the sake of science, of course.

After successfully pulling the bus without any issues, Westen heads off for California with no concerns. The issues begin once he begins speaking with the director at the legendary Bates Motel filming location. We can see fear wash over Westen’s face while the director is explaining the “to do” list.

Following hair and makeup, he would like Westen to move the car into position, and they’ll get started with the strapping of the SmokeStang to the cement truck. “Wait… what are they going to do to me in hair and makeup? They’re gonna put makeup? on ME!?”

After his release from hair and makeup, Westen is asked to film a couple of shots of the SmokeStang doing a burnout of epic proportions, as well as a quick interview explaining what he does for a living. The moment of truth comes at 11:05 when Westen is ready to do some science and see once and for all if a Cummins-swap Mustang can pull a 40,000 lb cement truck.

With black smoke pouring out from the exhaust and white smoke from the rear wheels, the cement truck begins to move. Wes shouts, “come on baby” from the driver’s seat and is even able to get the car into third gear. An inside cab view of the cement truck shows some slipping and sliding and losing grip, but the mission is a success.

The answer to the age-old question now has a conclusive answer. Yes, a 12-valve Cummins diesel-swapped Ford Mustang CAN undoubtedly pull a 40,000 lb cement truck.