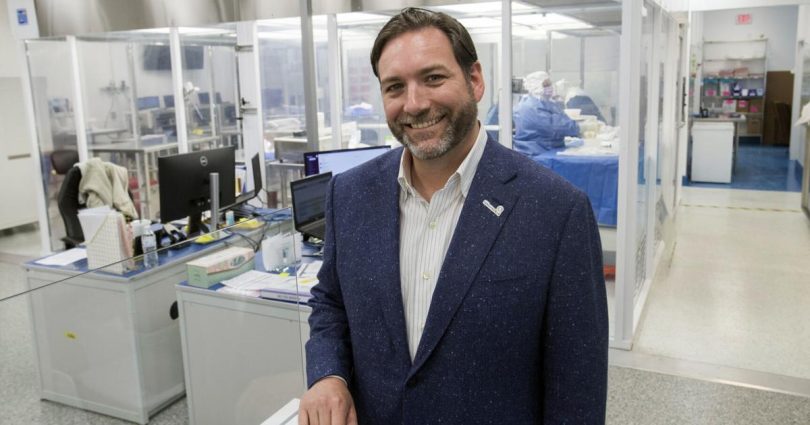 Growing up as the son of an attorney and a dance instructor, Joe Spell was more fortunate than many of his friends.

Many of them, he recalled, had parents in the oil and gas business. Back in those days in the Lafayette area, that segment employed a majority of the population. And he learned quickly the industry’s boom-and-bust cycles and what effect that had on people.

“I had a lot of friends move away and people lose their jobs,” Spell recalled. “My wife’s family is in oil and gas. I’ve seen what that up-and-down can do.”

Fast forward decades later, and Spell is heading up Tides Medical, a growing medical company that is housed in an office along Pinhook Road that, as it turns out, once housed drilling giant Halliburton, and another office on Kaliste Saloom Road. With only about 30 employees in 2019, it now employs over 100 and has plans for construction to handle more growth as it becomes another shining star among an expanding health care sector in Lafayette.

Tides Medical makes high-quality human amniotic tissue grafts from donated placentas for patients with chronic wounds or who have had surgery. To get qualified employees, it lures employees from Boston and San Diego — two major U.S. biotech hubs — to Lafayette.

The company, which once received a visit from U.S. Sen. Bill Cassidy, has a bright future in a city that historically has been powered by the oil and gas industry. The company’s annual revenue has more than tripled since 2019, Spell noted.

“One of our biggest advantages of being here in Acadiana is people aren’t afraid to try new things,” he said. “And the culture is very supportive of new entrepreneurial ideas. My co-founder is from Boston, and her husband always said, ‘I’m amazed that people don’t necessarily know how to do things but they do things. They have this amazing do-how here.’”

Tides Medical’s growth has paralleled what has quietly happened in the health care sector in Lafayette in recent years. Others like it have surfaced to complement established long-established mega-employers Acadian Ambulance and LHC Group. And as jobs in the oil and gas industry’s employment locally has dwindled in recent years, health care’s growth has stepped up and created a new buzzword in Lafayette.

“With health care, there is measurable, tangible growth in that sector,” said Mandi Mitchell, CEO of the Lafayette Economic Development Authority. “It’s almost like we’ve become a magnet for other companies doing really unique things in the health care space. There’s a strong demand for what they (Tides Medical) do. Lafayette was just a great place for them.”

The employment numbers tell the story. Gary Wagner, Acadiana business economist at the University of Louisiana at Lafayette, presented the data during an event with One Acadiana last year and showed how the economy has changed since 1990, a time when about 1 out of every 4 jobs was in either oil and gas or manufacturing.

Since then, the total jobs in the Lafayette area in oil and gas have contracted about 40% with manufacturing shrinking about 30%. Jobs in the education and health services sector, however, have grown 110% after making up only 8% of all jobs in 1990.

“That is a really remarkable transformation for a region in a relatively short period of time,” Wagner said. “Our economy is evolving.”

In the first quarter of 2012, during the height of the fracking boom, the parish was the hub for Louisiana oil and gas with over 17,000 jobs in the natural resources and mining sectors, federal data shows. By the second quarter of 2022 — the most recent data available — that number has been more than cut in half at just over 7,000.

Mark Zappi, as executive director of the University of Louisiana at Lafayette’s Energy Institute of Louisiana, gives presentations around the country about what it’s like to be in the energy industry, particularly oil and gas. His first slide, he says, is an image of people of people riding a roller coaster with a look of terror on their faces.

Zappi, the son of an oilfield geologist, knows all too well the boom-and-bust cycle of the industry. The most recent boom came during the hydraulic fracturing boom around 2013 when U.S. crude production exploded. Then the bust followed due to overproduction, causing the price of oil to plunge and companies in the Lafayette area to bleed jobs.

“Our workforce has been through this,” Zappi said. “I tell people who get into the oil and gas industry to prepare every 20 years for a complete drop. So hang on to some cash and don’t give up. It’s like the stock market — they tell you it’s a long-term investment. If you’re working in energy, it’s the same thing.”

A bigger punch to the gut, however, was the drop in local consumer spending. Overall taxable sales in Lafayette Parish dropped nearly 10% between 2014 and 2016, LEDA data shows.

It was about that time when Broussard was going to be the home of a massive $60 million retail development, Acadian Crossing, at the corner of U.S. 90 and Ambassador Caffery Parkway. It even had a well-known grocer lined up as an anchor tenant.

Yet the Alabama company behind the project scrapped plans as consumer spending plunged. The land remains vacant today.

“It was the most painful thing I’ve ever gone through,” said Mike Moncla, president of the Louisiana Oil and Gas Association and partner at Moncla Workover and Drilling in Lafayette.

“That downturn in 2015, the oil and gas industry has been through ups and downs over the years, but I don’t think anything compared to (it). When you look at downturns of the past, there was still an Oil Center in Lafayette with hundreds of companies. But now you’ve got hardly any rigs running. You’ve got an Oil Center that’s basically retail stores. The oil companies left.”

Former Lafayette Mayor-President Joey Durel recalled how in 2015 he and others noticed a pattern in decline in sales tax revenue. That year, with elections looming, he did not sign the budget from the city-parish council after members added about $1 million to it.

But the economy had taken hits before, Durel noted. The Great Recession was actually a bigger hit to the economy than the 2015 downturn. But even amid the industry’s highs and lows, oil and gas provided the foundation for diversification to happen, he said.

Even with how the industry has changed in Lafayette, Zappi is still optimistic the industry will see good times again. Oil prices swung wildly in in 2022 with the volatility in the world market and war in Ukraine but has settled to just over $70 a barrel in recent weeks.

That’s one reason why Zappi feels good. Another is that at last spring’s commencement all petroleum engineering grads left with a job offer.

The significant reduction in jobs in the last 30 years, Wagner noted, does not mean the industry will fade away. It’s still going to be a significant part of the economy.

“It is and will be,” he said. “About 5-6% of our jobs are directly related to oil and gas, and that industry pays almost double the average of every other industry. So it’s a very important piece.”

The industry needs sustained growth, Moncla noted, that will last more than a couple years. Drilling is still active in the Haynesville shale in northwest Louisiana and east Texas, but companies haven’t figured out how to solve the Austin Chalk play in south Louisiana.

Activity in the inland waters, which was once active along nearly the entire Louisiana coast, has slowed partly due to coastal erosion lawsuits, he said.

Until then, the diversification talks leads to this question: Will Lafayette one day shed its title as an oil and gas city?

“Regardless of what you hear, we’re always going to need oil and gas,” Durel said. “I don’t know that a Midland, Texas, is where the people from Lafayette who are working over there really want to go to raise a family. They might prefer to go there for a week and come back home. If we can have a quality of life that’s competitive with other great cities, I think we can hang on to much of those titles that we like for a long time.”

Even though the number of natural gas and mining jobs in Lafayette Parish have been cut in half since 2012, the parish continues to be the leader among the state’s 64 parishes.

In the first quarter of 2001, the parish was home to over 15,000 jobs, which was double the amount in Orleans Parish, home of the second-highest total. At the end of 2012, Lafayette had three times the number of jobs (15,579) as Terrebonne Parish, which at 5,032 had the second-highest jobs.